A Tale of Two Coaches

Share All sharing options for: A Tale of Two Coaches

The Hurricanes just passed the point in time at which both of their head coaches had been behind the bench for the same number of games.  Maybe it's a good time to make a few comparisons, to see if the coaching change has achieved the desired results?

Peter Laviolette coached the team for a total of 25 games this season.  13 of those games were played at home, while 12 were on the road. The Hurricanes had a record of 12-11-2 and earned 26 points during Laviolette's tenure.  They scored a total of 65 goals but allowed 75.

If we compare Paul Maurice's first 25 games with the team, the schedule was a bit tougher for him.  The Canes played 14 games on the road and only had 11 at home.  They achieved a record of 12-10-3 and earned 27 points while under Maurice.  The team scored 61 goals but allowed 73.  (these numbers do not include game 51, the 2-0 win against Atlanta).

There doesn't seem to be much difference in those results, but do the numbers tell the entire story?

Laviolette's system was known as a wide-open, pedal to the metal style which required constant puck pressure and hard skating.  While that type of game is exciting, it can allow for more odd man rushes and break-aways coming back the other way if things break down.  It is also a tough system to play in that skaters can get frustrated and tired when things don't go well.  Perhaps this is why it seemed like the team lacked energy and focus at times while under Laviolette?

Paul Maurice has been preaching a more disciplined style of play, emphasizing a defensive first philosophy.   During Maurice's first run with the club he employed a neutral zone trap, a system which chokes off attempts to skate into the offensive zone.  While it is a tough system to score against when utilized properly, it also can limit a team's ability to attack because they are spending a good part of their time standing in the neutral zone.  It usually is not described as an exciting brand of hockey.

Has the trap returned to Raleigh?  Take a look at the following pictures and judge for yourself.  (click to enlarge) 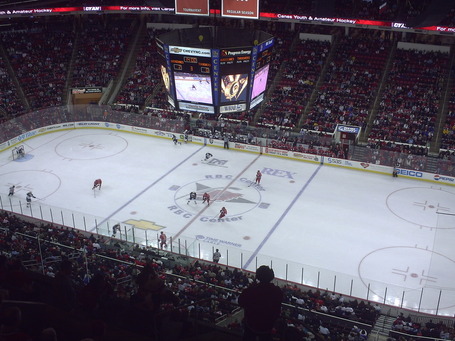 The first picture was taken with 14 minutes left in the third period during Saturday night's game against Atlanta.  Matt Cullen is forechecking while the rest of the Canes are stacked in the neutral zone. 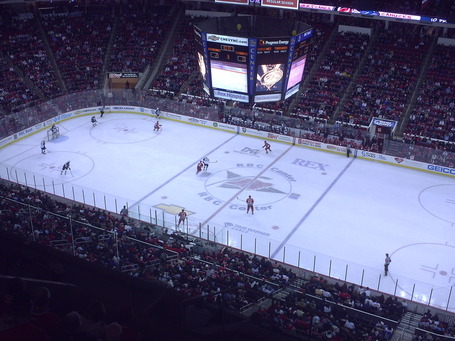 This one was taken at the 10 minute mark. Ruutu is doing the forechecking here while Staal is covering someone at the blueline. Samsonov is standing on the left, waiting just inside the red line.  The Thrashers still have four players in their own end, ready to bring the puck out.

The contrasting styles are undeniable.  Laviolette almost always utilized two forecheckers, and usually had a third forward patrolling inside the blue line.  But now Maurice seems to prefer a much safer route, especially if the Canes get the lead.  Carolina skated wide open as they totally dominated the first period of Saturday's game, but they backed off afterwards.  Would that be a wise strategy against a more talented team than Atlanta?   While the Hurricanes have allowed fewer goals against and have reduced the number of quality chances Cam Ward faces every game, their scoring has also gone down a bit.  Even during this recent winning streak, the team is just averaging two goals a game.  Logic would dictate that the club will eventually need to score more goals to keep winning, but can they score more while waiting to counter-attack from the neutral zone?.

Both coach's systems have positive attributes as well as negative.  Is it possible to use a hybrid style of sorts, or change systems as needs dictate?  Are the Carolina players good enough to do that?

Of course winning and losing trumps everything else.  If the Hurricanes make it to the playoffs, Maurice will have accomplished his goal and will be rewarded.  If the team comes up short, all the new systems and philosophies will have been for naught.