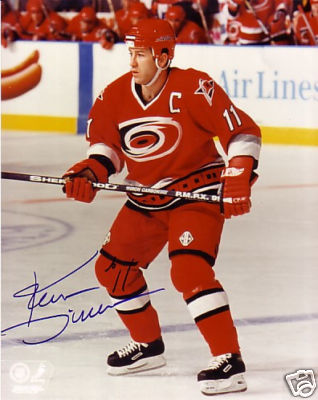 Kevin Dineen was originally drafted by the Hartford Whalers in the 1982 NHL Entry Draft.  After several years with the franchise, he was traded to the Flyers in 1991 for Murray Craven and a fourth round draft pick.  Then in 1995, he was traded back to Hartford for two draft picks, (third and seventh rounds).

Dineen was the first team captain for the Hurricanes after their relocation south.

After retiring in 2002, he went into coaching and is now head coach of the Portland Pirates of the AHL.  Most recently, Dineen has even been mentioned in rumors about possibly being next in line to coach the Canes.

For more information check out the following links: