After setting the big record last night, Martin Brodeur will be getting the night off at the RBC tonight as the New Jersey Devils take on the Carolina Hurricanes. Ex-Hurricane Kevin Weekes will be in net for the visitors. 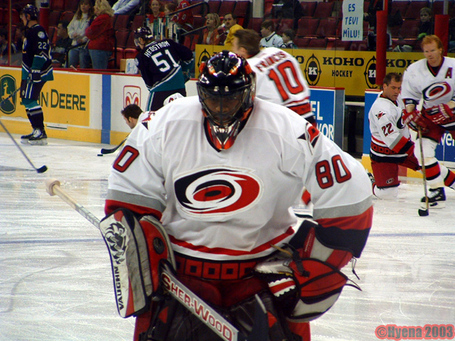 "Shady 80" will forever be remembered as the goalie who had the crucial save of the series back in 2002 when the Hurricanes rallied to defeat the Devils in the opening round of the Stanley Cup Playoffs. Of course the Canes went all the way to the finals only to lose to the Detroit Red Wings, the best team that money could buy at the time.

Right now, the Hurricanes still find themselves in a tenuous at best, eighth spot in the Eastern Conference. Both of the closest teams behind them lost last night, (Florida and Buffalo), but both of them still hold a game in hand, so the Canes certainly can not afford to take this game off.

The Devils are in first place in the loaded Atlantic Division and are currently sitting in second place in the Conference. They are led by:

Parise is having a career year and is dangerous whenever he is on the ice. Also look out for Travis Zajack and Jamie Langenbrunner as well.

It's been reported that defenseman Colin White will be missing this game.

Weekes will be facing Cam Ward in net for the Canes, who will be starting his 19th game in a row.

Eric Staal and Ray Whitney are still leading the point barrage for the Hurricanes. The lines are expected to be the same, except that Jussi Jokinen has moved up to the third line.

Patrick Eaves seems to have recovered from his injury suffered Saturday night and should see some time on the fourth line.

Some tidbits: Ray Whitney has a four game point streak. Eric Staal has a three game streak of his own. Erik Cole has scored eight points in his six games back with the Canes. Anton Babchuk has nine points in the last 13 games and believe it or not, is rated second among all NHL players in plus/minus rating since the All Star break with a plus +16. Four of the defenseman's nine goals were scored while on the powerplay.

For more Devils information, check out In Lou We Trust.

Will the Devils still be flying high after last night, or will they be flat? Can the Hurricanes shake off the rust after a few days off? Game time starts at 7 and it will be broadcast locally by FS Carolinas.