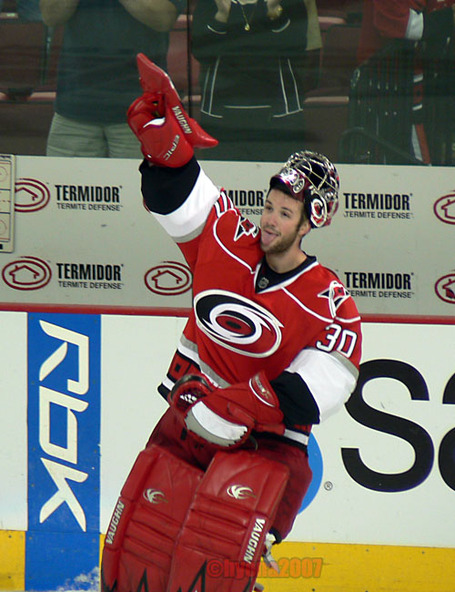 The Carolina Hurricanes won their eighth game in a row at home last night as they defeated the Washington Capitals, 4-1.  After a slow start in the first period in which they were out-shot by the opposition by a 10-4 margin, they came on stronger in the second period, and then put the visitors away in the third.

Cam Ward held down the fort while the Canes skaters were finding their legs, and ended up as the first star of the game as he made 31 saves out of 32 shots on goal.

After a scoreless opening period, the Hurricanes drew first blood in the second when Rod Brind'Amour roofed a beautiful shot from the slot area past Caps goalie Jose Theodore.  The captain was the recipient of another perfect pass from Jussi Jokinen, but Sergei Samsonov started the play when he dug the puck out of the corner.  This line has obvious chemistry going and they continue to generate scoring chances and points.

The teams battled pretty evenly the remainder of the period, but Mike Green notched one and tied things up with just 34 seconds left.  Washington seems to make a habit out of scoring late in periods, (especially Alex Semin), and last night was no exception.

The intensity and emotion picked up in the third period, as did the hitting.  About five minutes into the period, Joni Pitkanen backhanded a rebound past Theodore, and the sell out crowd went wild.  Pitkanen had carried the puck in the zone, skated around the back of the net, and was "sniffing for something", as Joe Corvo put it.  He was rewarded when an Eric Staal shot bounced at his feet and he patiently settled it, then flicked it past the prone goalie.

At about the 13 minute mark, Anton Babchuk continued his scoring spree and put in yet another rebound.  Dennis Seidenberg had noticed the defenseman sneaking in and put the puck on net.  Sure enough, the rebound went right to the red hot player and "Babs" made it look easy.

Things got a bit chippy late in the contest as Alex Semin and Tim Gleason exchanged pleasantries as well as roughing minors.  Semin was very smart not to drop the gloves with Gleason because the Carolina defenseman would not have been playing "patty-cake" with the slap happy Russian if they got into an altercation.

Tim Green also roughed up Joni Pitkanen after the Hurricane high sticked him, (more of a cross check to the helmet).

With just a minute and change left, Rod Brind'Amour was called for boarding Alex Ovechkin, on a play which initially looked worse than it was.  The Hurricanes captain complained  that Ovechkin embellished his reaction to the hit, but it seemed like a good call.  Although the Russian was no worse for wear because after taking a sniff of some smelling salts, he was right back out there for the ensuing powerplay.

The Caps pulled their goalie to try to give themselves even more of an advantage, but Joe Corvo shot the puck from behind the goal line and it rolled just barely past the out-stretched reach of a speeding Ovechkin to make it into the net.

The two points gives the Hurricanes a touch of breathing room as they remain in sixth place, one point ahead of the seventh place Rangers, and three points ahead of the imploding Montreal Canadiens, who were dominated last night by Toronto.  Florida lost as well as they blew a late 1-0 lead and allowed three Columbus goals in the last three minutes.  (One was an empty netter).  The Panthers are in ninth place, five points behind Carolina and will host the Hurricanes on Monday night.

Once again Jim Rutherford looks like a genius for the acquiring Jokinen, a player who passed through the waiver wire twice, with no takers.  Not only did the Carolina GM make the acquisition, he also dumped two players, (and their contracts), who were not contributing as well.  Where are they now?  Brookbank and Meliicar are both playing for Norfolk.

Joe Corvo said after the game that Ovechkin was talking some trash.  "He told me that he would be coming at me all night long, and I responded that I would be here.  And sure enough, he got me every chance he could.  He's a great player and it's fun to play against someone like that."  For Corvo's interview check the link.

Anton Babchuk now has 8 goals in his last 15 games.  He led the team with a +3 last night and continues to be one of the top two players in the NHL since the All Star break in plus/minus.

Cam Ward has started a new personal best, 21 consecutive games.  He has also started 38 of the past 39 games for Carolina.  After the game, he said that he "felt great".  Will he catch a break before the end of the season?

Tuomo Ruutu led both teams with six hits.  He came very close to getting on the scoresheet again tonight, but just missed.

The win gave the Hurricanes an 11-3 record for the second game of back-to-back affairs.  That might be the best record in franchise history for that feat.   There are not any other back-to-backs on the schedule this season.

Carolina has not won eight games in a row at home since the 2005-06 season, when they won nine straight.