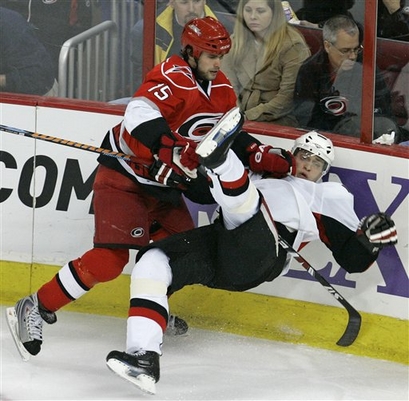 The Carolina Hurricanes tied a franchise record by winning their ninth game in a row at home last night with a 2-1 win over the Ottawa Senators in front of 17,146 at the RBC.  After a cautiously slow opening two periods, which almost seemed like a chess match between two strategic teams, both clubs opened it up in the third.  Carolina had a bit more fire in their game than the visitors did though, and scored the two goals needed for the win.

Just a minute into the deciding final period, the Senators got on the board when a loose puck got by Anton Babchuk right in front of Cam Ward.  Ryan Shannon was there to flick the puck in the net for Ottawa, and the Canes were down 1-0.  The defenseman slammed his stick on the ice in anger, but he would atone for his mistake later in the game.

The home team seemed a bit flat right then, but Paul Maurice put the fourth line into the game.   They responded in a big way by driving to the net, hard.  Ryan Bayda and Dwight Helminen mixed it up with a couple of Sens, and then Tim Conboy tried to join the scrum.  The brief skirmish got the crowd back into the game and seemed to inspire the bench as well.  Conboy took a roughing penalty along with the Sens Jarko Ruutu and the teams played four on four for two minutes.

About a minute into the "advantage", Rod Brind'Amour joined a rush along with Ray Whitney and Joe Corvo.  Whitney put the puck on net and the rebound bounced out to the captain.  Brind'Amour sent the puck right back to the net very quickly to tie the score.

The Hurricanes were outplaying the Sens at this time, but could not connect on several close plays.  They finally were able to draw a penalty though because of the hard work of Chad LaRose and the powerplay unit came on the ice.

While the first unit came up short, the next group came out and for the second consecutive game, Joni Pitkanen would serve up a perfect game winning assist, this time to pairing partner, Anton Babchuk.  In what's becoming a familiar sight to fans, the red hot "Rocket Man" rifled in another blast from the point to give the Hurricanes the only lead they would need.

As usual, Tuomo Ruutu played a very physical game and was credited with five hits, one of them a crushing blow to Christoph Schubert near center ice.  The Sens winger didn't see the Finn come at him and was almost knocked cold.  He laid on the ice for several minutes afterwards, but seemed to gather his wits on the bench.  After the game Ruutu said that he was concerned for the other skater and hoped he was all right.  "You always want to have a clean hit, but you are never sure when it happens.  I asked the ref after the play, and he said it was clean".

Rumors of Rod Brind'Amour's early retirement are greatly exaggerated.  The captain has been on a tear of late and has 6 goals and 14 points in the last 10 games.  He picked a perfect time to crank up his game.

Eric Staal shadowed Jason Spezza all night long and if you looked at the scoresheet, you would think that the Ottawa center didn't play.  Zero points and zero shots in 21 minutes of action.  He was a non-factor.  The Carolina first line completely neutralized their counterparts, all night long.  On the other side of the ice, Staal made a magic move through the defense only to hit the post on what would have been a highlight reel goal.

Ray Whitney just keeps doing what he does every game.  Scores points, sets up plays, and leads the team on and off the ice.  It's a shame he does not get any Hart Trophy consideration.

If Anton Babchuk gets any hotter, he'll have to put his stick down on the ice and pretend that he can't pick it up.  As we have mentioned before here on the blog, not only has he been racking up points but he ranks near the very top in the NHL regarding plus/minus since the All Star break.

Once again, Joni Pitkanen led the team with 23 plus minutes of TOI and was very solid on defense, to go along with his game winning assist.  Did the Oilers give up on him too soon?

Who was in front of the net blocking the goalie's view on Babchuk's game winner?  None other than Jussi Jokinen, who has done yeoman's work at filling in for injured Matt Cullen.

Cam Ward started his 23rd consecutive game and is 15-6-2 during the stretch.  He is quietly looking like one of the top goalies in the NHL.

Since the Hurricanes just defeated the hottest team in the league, what does that make them?  They are 9-2-1 in the month of March, have won nine in a row at home and five in a row, overall.  Their next game is in New Jersey on Saturday night.