Share All sharing options for: Erik Cole on Verge of New Deal? - (Updated) 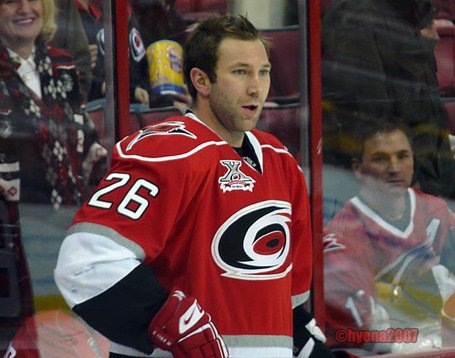 According to an article from The Fourth Period.com, the Hurricanes are in the process of negotiating with Erik Cole on a new contract. The winger has 10 points, (2g 8a), in 12 games since his return from Edmonton. More importantly, the team has responded to his insertion into the lineup by going 9-1-2. The Canes have yet to lose a single game at home this season with him wearing the sightless eye.

Cole is one of the best in the NHL with his ability to draw penalties and when he is on his game, can be one of the most powerful skaters in the league. He also has the speed to skate with Eric Staal, which helps the center's game out as well. The Oswego, New York native is coming off a three year, $4 million dollar per year contract, but might be hard pressed to duplicate that deal.

While his numbers might be down a bit since the career threatening, neck breaking hit by Brooks Orpik, Cole can still be very effective and would be one of the top free agent forwards available, if he remains unsigned on July 1st. According to the report, the Canes would like to sign him at between $3 to 3.5 million per year, which makes sense because the team now has $3.5 million available after trading Justin Williams to Los Angeles.

But keep in mind, they still have RFA's Tuomo Ruutu, Jussi Jokinen, and Anton Babchuk to re-sign. Also potential UFA, Chad LaRose, may have played his way into a higher contract which brings up another challenge altogether.

Jim Rutherford has been burned by a couple of his previous longer term deals and he was recently quoted as saying that due to the volatile economy, shorter term contracts were probably the order of the day. The team is also most likely hoping that Cole will give them a "home town discount" because he has family in the area and has made it clear he loves it here. Even after the trade, he and his wife never sold the home that they built here a couple of years ago. Another factor that Cole and his agent might be considering is that he certainly has better stats here than he did in Edmonton.

What do you think? If you were Jim Rutherford, how much would you offer to pay Erik Cole?

((UPDATE)) This report is not confirmed by the Hurricanes and is just speculation)).