Tuesday evening, 99.9 The Fan had a special playoff preview show hosted by Mike Maniscalco which was broadcast directly from New Jersey.

850 The Buzz and sister station, 620 The Bull have started a new promotion called, "Two Stations, One Cup" and have ramped up their hockey talk recently.

One might think that something special is going on regarding the Hurricanes? 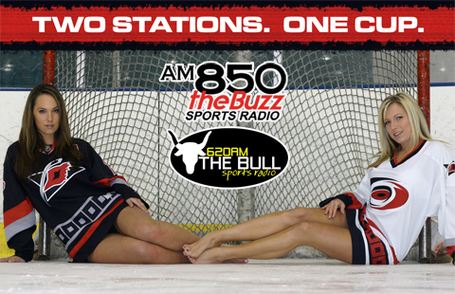 Local media has beefed up Hurricanes playoff coverage in a big way, and fans are the winners.

As Cory recently reported, the beat reporter for the News and Observer, Chip Alexander, will be back on the road during the playoffs covering the team for the paper.  Columnist, Luke DeCock has been contributing more articles lately and will certainly continue to do so.  Javier Serna also helps out.  The publication's Canes Now blog had a recent facelift and has been busier than ever.

Mike Maniscalco and Adam Harris of 99.9 The Fan both made the trip to Jersey and will amplify the station's hockey coverage while the Hurricanes participate in the playoffs.   The pregame show has been expanded to a full hour and the post game show usually continues on as long as they need it to.  Their web presence has also improved and now includes more team related video and audio than ever before.

Adam Gold and Joe Ovies also have enhanced their hockey discussion during 850 The Buzz's local morning show.  On Tuesday morning they spoke with ex-Hurricane Kevyn Adams and will have him on again soon.  Chuck Kaiton will be a guest each morning after a game.  They are going to continue the "Citizen Cane" promotion, as well as the "Stormfront" and "Aftermath" shows before and after each home game.  And they will be giving away playoff tickets throughout.

The station's Blog will have hockey related news and will be posting more photos related to their popular postseason theme.

These outlets have always covered the team, but kudos to them for allocating the resources and outlaying the expenses to give fans this "A plus" coverage during the most exciting time of the year.