Hurricanes Have Their Own 'Big Unit' In Anton Babchuk

Share All sharing options for: Hurricanes Have Their Own 'Big Unit' In Anton Babchuk 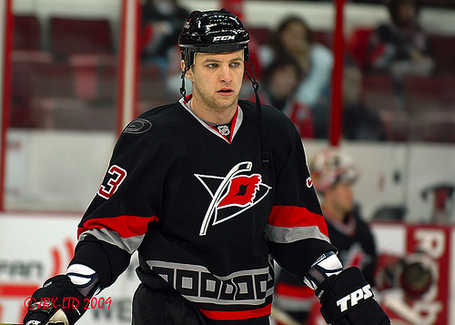 That was the book on Anton Babchuk from the time he came to North America to pursue an NHL career. You can teach poise and positioning, instill work ethic and confidence, preach patience and determination. But that shot. You can't teach that shot.

Carolina's imposing defenseman is reminiscent of another player, but one from a different sport.

In 1985, the Montreal Expos used a second-round pick on a 6-10 pitcher out of Southern California. By 1988, he had made it to the big leagues. But an impressive four-game stint that season was followed up by an erratic start to 1989. Seven appearances, six of them starts. But just 29.2 inning pitched, a bloated 6.67 ERA, no wins and four losses. He averaged nearly a walk an inning. But he also had 26 strikeouts. Man, this guy can throw darts, but will he ever get under control? No one was quite sure what would come of the gawky southpaw. But one thing was certain: when you saw him pitch, you couldn't forget Randy Johnson.

On May 25, 1989, Johnson was dealt to the Seattle Mariners — along with Gene Harris and Brian Holman — for Mariners icon Mark Langston and Mike Campbell. Johnson slid into the M's rotation, making 22 starts the rest of the season, going 7-9 with a pedestrian 4.40 ERA. His walks were down some (70 in 131 innings) and his K's were still impressive (104).

For next three seasons, Johnson terrorized the American League, compiling a 39-35 record, amassing 663 strikeouts but still struggling with control. No only did he walk 416 over that stretch (leading the AL in each of those seasons), but he was also piling up hit batsmen.

He had become one of the most feared pitchers of the era, and not because he gave his team a chance to win every time out, but because players legitimately feared for their safety when facing the massive lefty.

The fear he instilled due to his wildness meshed with his improved control, making him the most intimidating force in baseball. There were still erratic moments, like the famous John Kruk All-Star game at-bat (below), but Johnson was on his way.

Each year he got better, transforming himself from freakish sideshow to future Hall of Famer. Everyone loved watching the ease with which teammate Ken Griffey Jr. excelled in every aspect of the game, but even he couldn't compare to the sheer power and electricity of every Randy Johnson pitch. Even as his career winds down, Johnson — now with San Francisco — can still bring the heat and inspire awe.

Which brings us back to Babchuk.

He was labeled as a can't-miss prospect: an imposing force who was big, smart and could skate. His shot was deemed "powerful ... but not very accurate." The Chicago Blackhawks were believers. They selected Babchuk with the 21st overall pick in the 2002 Entry Draft.

But after several years, the Hawks brass grew tired of waiting for the Ukrainian blueliner to put it all together. In January 2006, they dealt Babchuk and his "failed potential" to Carolina for d-man prospect Danny Richmond. Richmond, while undersized for the style he played, was considered a harder worker, someone who wanted it more than Babchuk.

"[Richmond] is a skilled defenseman who possesses a lot of grit and toughness," Chicago GM Dale Tallon said at the time. "He definitely is the type of player who fits with the type of team we are trying to build."

Like many before him, Rutherford saw potential in Babchuk. He also knew it took longer for defensemen to mature into NHL-caliber players, and thought Richmond — just a few months younger than the player he would be traded for — wouldn't ever reach that level. (He's now with his fourth organization, playing for the Blues' AHL team in Peoria).

Babchuk joined a team of destiny. He got in 22 regular-season games with the Hurricanes, getting his name on the Stanley Cup despite never playing in the postseason.

But Babchuk appeared to lack confidence not only on the ice, where he seemed hesitant to unleash his potent blasts, but off the ice as well. His stoic demeanor and thick accent were reminiscent of Ivan Drago, not fun-loving Alex Ovechkin.

He played 52 games in 2006-07, managing just two goals. Fans enjoyed Bret Hedican's perfect skating stride, Glen Wesley's unparalleled positioning and Tim Gleason's intensity. But when Babchuk wound up from the point, preparing to release a laser toward the opposing net, time seemed to stand still. Everyone knew the shot would likely fly wide, hitting the boards or glass with a reverberating THWAP! But in that moment, we all knew we were going to see something amazing, even if the end results weren't there.

Babchuk had become a fringe top-six defender, not the dynamic weapon many thought he would develop into. Further complicating matters was Babchuk's decision to return to Russia for the 2007-08 season. Disappointed with a late season assignment to Albany the year before — the only move Rutherford could make without putting a player through waivers — Babchuk pouted his way out of the organization's good graces.

But after a solid season with Omsk, the 6-5 rearguard returned to Raleigh to take another crack at earning an NHL job. Welcomed back by the team, his early season results were similar. His shot was feared — not for its accuracy but rather its ability to inflict pain on defenders and goalies alike. Johnson's pitches were capable of vaporizing birds. Babchuk's slapshot could break bones and crumble opponents.

But like Johnson's 1993 season, something clicked inside for 24-year-old. On Feb. 19, Babchuk had a goal and an assist in a 6-2 win over the Islanders. After just one assist in the next two games, he closed out the month with goals in three straight games against Ottawa, Buffalo and Atlanta.

In March and April, he had eight goals and eight assists. Beginning with his two-point night against the Isles, he compiled 12 goals and 10 assists in just 24 games.

Once feared for the damage his shot could wreak upon opponents' bodies, Babchuk was now terrorizing scoreboards. But even more encouraging was the change in Babchuk's demeanor. Once upon a time, Babchuk seemed detatched and indifferent. But with goals came confidence, not just in releasing his booming shots, but also in expressing his emotions. Goals were followed by leaps, fist pumps, smiles and embraces.

Not only was the Canes' "Big Unit" expressing himself on the ice, but he seemed happier and more confident off the ice. The Anton Babchuk everyone always expected had arrived.

He is still the most intriguing player in a Carolina jersey, but now his anticipated slapshots lead to results. Joni Pitkanen, Carolina's do-everything defensemen, patrols the RBC Center ice like Griffey did centerfield at the Kingdome: graceful and effortless. But like Johnson in Seattle, Babchuk induces an atmosphere of wonder and power whenever he fires a shot.

For the Hurricanes, it couldn't have come at a better time. For Babchuk, it was just a long time coming.