The Time is Now for Eric Staal - Game 2 Preview

Share All sharing options for: The Time is Now for Eric Staal - Game 2 Preview 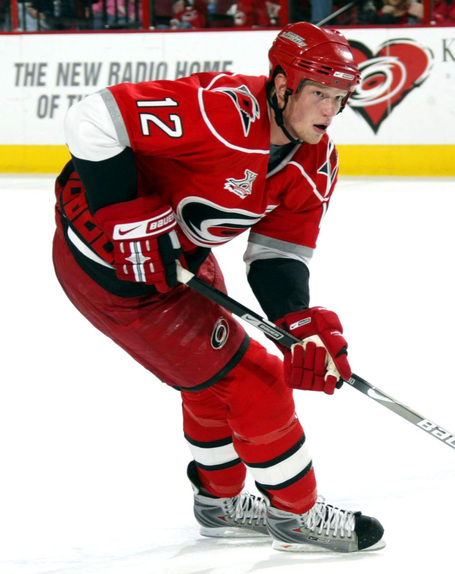 Tonight the Carolina Hurricanes face the New Jersey Devils in a game that is vitally important to the Canes if they want to continue on in this postseason.  According to "WhoWins(tm).com", NHL teams who fall behind 2-0 while on the road in a seven game series, end up losing the series over 90% of the time.  Those are tough odds to overcome.

After a disappointing performance on Wednesday night, fans will be looking for a more competitive effort by the Canes for this contest.  They will also be looking for the club's number one star to step up his game.

Eric Staal led Carolina and the entire NHL in scoring during the 2006 Stanley Cup playoffs while averaging over a point a game.  As the young center goes, so do the Hurricanes.  This season, the team had a record of 22-3-2 when the All Star scored a goal.  Needless to say, they need him to score again soon.

It would also help tremendously if the Hurricanes could score the first goal of the game.  This season they have a record of 25-10-4 when scoring first as opposed to having a 20-20-3 record when they don't.  If they have the lead after the first two periods, they are usually money and have a 31-3-2 record in that scenario.

So the secret to their success is not so much a secret.  Eric Staal needs to score and they need to get the lead.

Of course the Devils will be doing everything in their power to make sure this does not happen, like having cagey veteran John Madden draped all over Staal at every opportunity.  One would think that the younger player would have the advantage in that matchup, but so far that has not been the case.

I am not the only pundit thinking that this game is crucial.   John Forslund has gone so far as saying that the first 20 minutes of the game could be the whole series.

The Hurricanes have opportunity early in Friday's game to reverse the fortune. That's why I truly believe the first period could be the whole series. It's hard to toss out a generality like this but quite possibly this is what it could boil down to.

It's hard to disagree with him.

The Hurricanes are a little banged up as captain Rod Brind'Amour did not take the ice for the team practice yesterday.  He was seen walking around gingerly, but head coach Paul Maurice said that he will be fine and will be in the lineup.  It would probably require an amputation to keep Brind'Amour out of a playoff game, but perhaps he will play fewer minutes?

If Brind'Amour isn't up to playing big minutes, he could move to the fourth line which would allow Jussi Jokinen to slide in with the Sergei Samsonov and Scott Walker line.  They might also consider moving Walker to the fourth line.  Patrick Eaves has had some zip in his step and is much faster than the veteran.

There is talk of scratching Tim Conboy and playing Ryan Bayda, which would give the Canes a bit more skill on their energy line.   As we mentioned earlier on the blog, New Jersey utilizes all four lines and coach Maurice usually does not.  That gives them a bit of an advantage, but the Canes are looking at changing it up a bit.

There is also talk of scratching Nic Wallin and allowing Frank Kaberle to take a spot alongside Dennis Seidenberg.  The problem is that Wallin usually gives a valuable physical presence, but he is slow of foot and is not the greatest of puck movers.  There is no easy choice here.

I will be posting the Hurricanes Newsstand after lunch with the latest developments and links to more articles.