If you have attended any of the playoff games at the RBC this season, you know what the popular fad is right now.  It's "More Cowbell!"

During certain timeouts, the clever folk at Canesvision have been playing a portion of this famous SNL clip for awhile now, and it has suddenly caught on and taken off.   Now people scattered all over the arena can be seen standing and doing their best impressions of Will Ferrell when they are cued by the music.  The Hurricanes official store, "The Eye" had been selling cowbells and were all sold out after the last game. (more have been ordered).  Why the sudden cowbell hysteria?

There is just something about the playoffs that make these little things special.

Back in 2002, two brothers used to dress up in tuxedos like "dumb and dumber" and danced in the aisles during breaks.  Fans cheered wildly for them and looked forward to their antics every game. 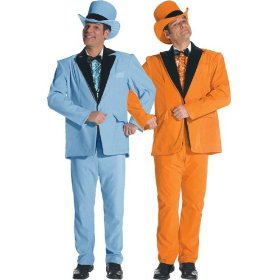 When Jeff O'Neill took a puck to the face up in Toronto during a game in the Eastern Conference Finals that year, his eye was blackened and swollen almost shut.  But the Canes leading scorer came back into the contest and ended up potting the game winner, black eye and all.   When the team returned to Raleigh, hundreds of fans blackened one of their eyes with makeup in support and attended the next game that way.

In 2006, three guys dressed up like members of the Storm Squad and even helped the girls lead the cheers at one point.  They called themselves "Stanley's Angels" and became almost as popular as the "Dumb and Dumber" brothers.  Also, who will ever forget Mike Commodore's "robe" which became so famous that Don Cherry even got involved.  Peter Karmanos made a small fortune selling those bathrobes at "The Eye", as fans used to attend games wearing the robes along with a wild red wig. 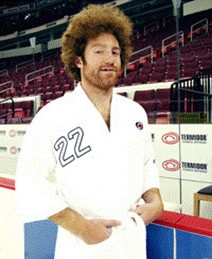 What is it about the playoffs which make fans embrace these unique oddities?  I'm not sure, but that is part of what makes the postseason so special,  memorable, and most of all, fun.

This year so far the fad is "More Cowbell".  Have some fans come up with other ideas that I have missed?  If so, please let me know and send in a picture.