Is Maurice Worthy of Jack Adams?

Share All sharing options for: Is Maurice Worthy of Jack Adams? 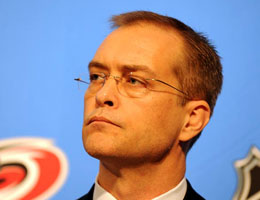 Now that the Carolina Hurricanes have qualified for the post season, there is little doubt that coach Paul Maurice has earned himself a new contract. He took over a team which was wallowing in mediocrity and guided it to a franchise record winning streak at home, as well as to a highly sought after playoff birth.

Last season Washington coach, Bruce Boudreau, won the Jack Adams Award after the Capitals reversed their early season misfortune and made it to the playoffs with him at the helm. Is Maurice just as worthy?

Boudreau coached the Caps for a total of 61 games and finished with a regular season record of 37-17-7. Maurice's record since taking over for the Hurricanes in early December is 32-17-5 and he still has a chance to add three more wins to that total. While Washington had a worse record than the Canes did before the respective coaching changes took place, the challenges were similar. Both coaches needed to get more out of their players and they needed to get everyone playing as a team. Both succeeded, although perhaps not in similar fashion. 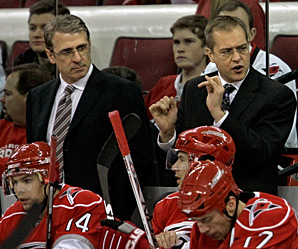 Maurice certainly has had ample help. Hall of Famer, Ron Francis, was designated Associate Head Coach and has been by the head coach's side since day one of the regime change. The two assistant coaches, Kevin McCarthy and Tom Rowe have considerable input. And last but not least, "Goaltending Coach" Tom Barrasso also seems very active with his contributions. The term "goaltending coach" is in quotations because it's doubtful that other coaches around the league with similar designations would be making suggestions for specific line changes in the middle of games and would be as actively involved in the system as Barrasso is.

While the Hurricanes blueline has been called a "defense by committee", one could certainly make the same statement about the coaching staff. Ron Francis and Tom Rowe join Maurice behind the bench, while McCarthy and Barrasso keep an eye on things upstairs in the booth. Not only does Francis wear an ear piece, so he can listen to advice from upstairs during game action, (just like an NFL team), but Barrasso and McCarthy go downstairs to the dressing room during every intermission for strategy sessions. Their input is not just taken into consideration for possible use at some point in the future, it could be utilized at any given moment.

When the announcement about the number of coaches was first made, some critics thought that there might be too many voices in one room. You know the old saying, "too many cooks spoil the broth?" But apparently these "cooks" share just enough ingredients to make things work. Most importantly, the Hurricanes Head Coach, who is ultimately responsible and whose job is on the line, has enough humility to listen to the advice, and heed it if he feels it is necessary. It is a talent in itself to be able to sort out suggestions from four keen hockey minds, and be able to make a decision about what ideas to use, and what not to use, and still keep everyone happy and contributing.

In December, the team seemed like a fragmented group. There were reportedly "cliques" on the club, and perhaps a couple of the new players felt like they were not fitting in. But after the coaching change, everyone was in the same boat. There was no longer any favoritism, and each player had to earn their playing time and prove themselves to the new staff. For instance, Chad LaRose went from being a healthy scratch to being a regular on the second line. Anton Babchuk and Joni Pitkanen started seeing more action, got to feeling more comfortable, and their production went up accordingly.

The Hurricanes were notorious for slow starts, so Maurice re-instituted morning skates before games, and focused everyone on starting games out with more intensity. The strategy has worked.

Another important improvment is that the Canes have looked much more organized on the ice. Gone are the numerous breakdowns which occurred several times a game, which allowed odd man rushes coming back the other way. The team also seems more adept at bringing the puck out of their own end because the forwards are coming back deeper and are helping out the blueliners.

While Maurice used to be known as a defense orientated coach, it appears that he has adapted his coaching style to the current talent level on his team. Under his watch team defense has improved, but the offense has not dropped off a bit. Defensemen, Joe Corvo, Anton Babchuk, and Joni Pitkanen continue to have the freedom to attack in the offensive zone, something that was rare for blueliners during his first term in Carolina.

More importantly than anything else, the Canes are playing like a "team" now. And thanks to Paul Maurice and company, it's a team no one wants to face in the postseason. Does that make him worthy of winning the Jack Adams Award? What do you think?