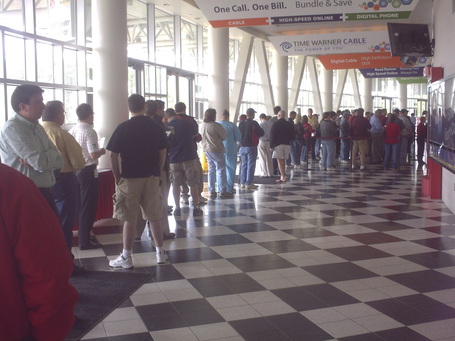 Want playoff tickets?  Here is some advice.  Do Not wait until the last minute!  Yesterday while I was at the RBC, I took this picture of the gathering storm waiting for a chance to buy playoff tickets, and the times, dates, and the official opponent had not even been determined yet.  This picture was taken before noon, the time when tickets officially went up for sale. I heard that by noontime, the line was out the door.

And some experts thought that hockey would never sell in the South?

Canes Corner will have it's final show of the season tonight at the Bass Lake Draft House in Holly Springs.  Erik Cole will be the guest.  Of course, Cole has been one of the important cogs in the "well oiled machine" that is otherwise known as the Carolina Hurricanes.  The winger has 15 points in 15 games since his return to Raleigh, most of them coming as assists to Eric Staal.  He is always an interesting interview.  If you can not make it to the Draft House, you can listen at 99.9 "The Fan" starting at 6PM.

Here is a little known tidbit.  When Cole was a rookie back in 2002, he and his wife lived in Holly Springs.  Welcome back, Erik!

In somewhat related news, the host of Canes Corner,  Mike Maniscalco, won the Hurricanes "DJ Shootout Showdown" which took place during designated intermissions throughout the season.  Last night was the final, and he blasted in 10 or 11 shots from the blueline to wrap up the competition  After that, he was awarded a nice trophy for his hard work.

Never at a loss for words, the host of the pregame and post game shows for Carolina's flagship station was celebrating his accomplishment up in the press area afterwards. 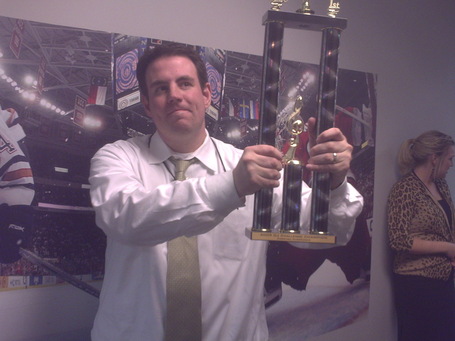 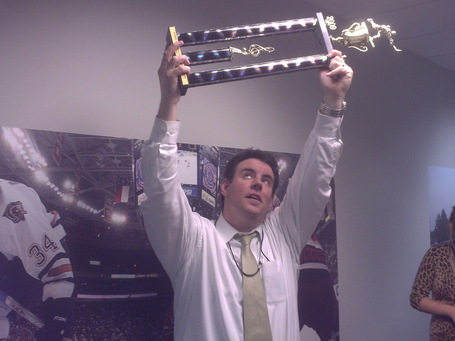 Seriously, Maniscalco does a great job and he's a very nice guy to boot.  The Islanders sure could have used his shooting touch on their side last night.  Congratulations to Mike!