The day after the Hurricanes traded Andrew Ladd for Tuomo Ruutu at last year's trade deadline, Canes Country suddenly started to get some visitors from Finland.  After the team acquired Joni Pitkanen during the 2008 offseason, the number of visitors increased.  Now that Jussi Jokinen has joined the club, the site seems to be a regular stop for several European fans of the three players.

The Finnish players spend a lot of time together off the ice and seem to be great friends.  Specifically, Jokinen and Pitkanen were teammates during their youth hockey days and have years of experience playing together.  They used that ice time spent in their youth to team up for the game-tying goal against New Jersey during game seven on Tuesday night.

After the game, Jokinen took a moment to give a shout-out to his home town and spoke a few words in his native language to his friends and family back home.  Folk back in Finland were obviously paying attention to the series.  The next day, a Canes Country article was linked from a popular Finnish hockey site.  Since then according to our site's analytics, we have received hundreds of visitors from Finland and we would like to welcome them all.

After practice on Thursday, I mentioned this to Joni Pitkanen and asked if he might like to give a message to their fans coming here to check on them.   Joni said that he would send me an email later that evening, and sure enough I received this message, (actually from Jussi),  to share from the "Three Amigos" to their fans in Finland.

If we continue to get high traffic from Finland, we could try to do more regarding this.  For instance, we might try to get a brief interview with one of the players with their response in Finnish.   If any of you visiting from the homeland have a message or comment you would like me to share with the boys, just leave a comment or send an email to canescountry@gmail.com.  We will do our best to pass it along. 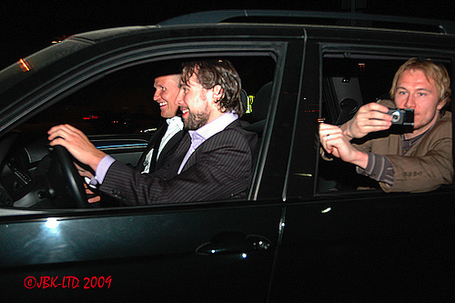 Again, thank you to LTD for use of her photos.