The Carolina Hurricanes sent a little message to the Boston Bruins Sunday night with a 3-0 win that tied up their semifinal series, 1-1. Cam Ward pitched his second shutout of this postseason and made save after save to earn first star of the game honors, but this was an excellent overall team effort which earned the victory. In case there was ever a question in anyone's mind, the Canes plan to make this a great series.

After a scoreless first period, Carolina took control of the second. Joe Corvo rifled in a shot from the point for his first goal of the postseason. Eric Staal and Erik Cole got the assists. Five minutes later during a Boston powerplay, Chad LaRose made a typical hustle play, (for him), chipped the puck in the neutral zone, and outraced the competition for it. He put a nice move on Tim Thomas and almost scored, then he gathered up his rebound and fed Matt Cullen who trailed him on the play. Cullen buried the shorthanded goal and made it 2-0.

At the end of the period, LaRose almost scored on another move. He hit the crossbar with a shot which took a crazy bounce and ran along the goal line. The on-ice official waved the goal off, but the play went upstairs and then eventually to the war room in Toronto for a review. After several minutes, (or longer), the decision was made that they had inconclusive evidence to over-rule the official, so there was no goal.

The folk at Versus seemed to disagree. 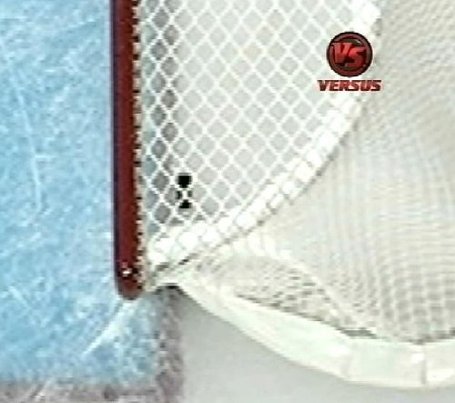 As expected, Boston came at the Hurricanes hard in the third period. They put 16 shots on goal to just three for Carolina, and were aided with the help of two powerplays. Carolina's penalty killers were up to the task though and have yet to allow a Boston powerplay goal this series. Of course, Cam Ward was the best penalty killer of the bunch and looked calm, cool, and collected throughout the night.

Near the end the Bruins pulled their goalie, but Eric Staal gathered a perfect pass from Joe Corvo with about 30 seconds left, and the All Star center made an easy empty netter to complete the scoring.

This was a much better effort tonight by the entire team and they eliminated the costly mistakes which killed them on Friday night.

Erik Cole finally dented the scoresheet, but more importantly he imposed his will on Zdeno Chara and helped create some space for Eric Staal. Cole gives up several inches and pounds to the huge defenseman, but was still able to move him off the puck a couple of times.

Chad LaRose was skating like a madman and he created chances all night long. People will be debating the "non-goal" call for awhile here in Carolina. Good thing it did not matter in the outcome.

Enough can't be said about Cam Ward, who had 36 saves. "Wardo" has yet to lose a playoff series in his entire career. After beating Martin Brodeur in a head-to-head matchup, it does not seem like he is intimidated by Tim Thomas.

Joni Pitkanen and Joe Corvo led the team with three shots each. Pitkanen led both teams with over 27 minutes of time on the ice.

The Bruins out-hit the Canes again, but it was closer than the first game. Several Canes were tied with three each. Pitkanen, LaRose, Cole, Ruutu, and Eaves were the leaders.

Paul Maurice appeared to mix and match the lines all night long. The strategy worked tonight as Eric Staal seemed to have more room to work than he did last game.

We will have much more analysis on Monday.