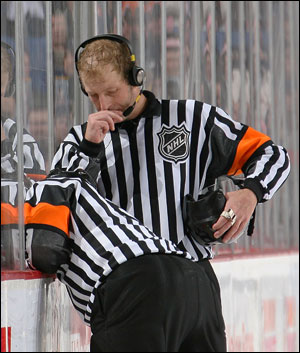 The Carolina Hurricanes have yet to score a powerplay goal in their semifinal series with the Boston Bruins.  Normally this might be cause for concern, or maybe even for some extra practice working with the man advantage.  But if you take into consideration that the Canes have only had a total of two powerplay chances in the two games played so far, it brings up a much larger question or concern.  Where are the calls?

The Hurricanes have been whistled for a total of eight penalties this series, (four each game).  The Bruins have been called only three times, (twice in game 1, once in game 2).  (In game 1 there were coincidental minors).  The inequity is strange enough, but the fact is that these results are the exact opposite of how the teams fared during the regular season.

During the season, the Canes were the least penalized team in the NHL at an average 9.8 minutes per game.

Boston on the otherhand was ranked sixth at 12.8 minutes per game.  The Bruins did get called for 46 major penalties, compared to only 26 for the Canes and of course that would drive their average higher.

Again, these full season results are the opposite of what is being called in this series.  Also, the disparity of penalties is the largest of any of the other series in the second round.  In the other matchups, the teams have been pretty evenly penalized.  So far, Carolina has had fewer powerplay chances than anyone out there.

The Canes are not exactly playing against a figure skating team.  To make a claim that the Bruins never commit any penalties is absurd.  They are an extremely physical team, and have been all year long.  But for whatever reason, their hooks, holds, crosschecks, and interference plays are apparently not being called in the same manner that they are against Carolina.  This is not to say that the Hurricanes are not committing penalties.  They are, and some are being overlooked.  But an inequity is present.

On top of that, there was a goal disallowed which over 90% of people who reviewed it, think should have been a goal.

Coach Maurice used to help out in the Toronto war room before he took the job in Carolina and is friends with several officials.  Are the refs giving the Canes fewer calls so that they do not appear to be biased because of this connection?  That thought might be a more realistic viewpoint than what some conspiracy theorists are thinking, that Gary Bettman and the NHL are out to make sure a team from the South, (with lower television ratings), does not make it deep into the playoffs.

Regardless, fans need to make sure that the refs give the home team a fair shake when they return to the RBC Wednesday night.  The calls have been much less than equal so far this series.