Raleigh native Kai Kantola was never selected in the NHL Entry Draft like many prospect services had predicted.  He does not have the advantage of NHL lineage, which is prevalent during the draft process.  No uncle who used to star in the league, or cousins who work in scouting, helped him to get a foot in the door.  Everything that he has accomplished, he has done on his own.

And he's not done yet. 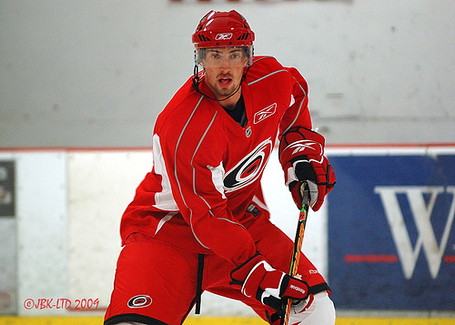 Kantola is trying to make the most of his time in conditioning camp and is grateful for the opportunity.  The Canes asked the skater to attend camp as a "collegiate invitee", which is similar to a free agent tryout in that the player has not committed to any NHL organization as of yet.  I asked the forward if other NHL teams were courting him as well.

When I played out in Fargo, I got a call from a couple of other NHL teams, but the Carolina Hurricanes have shown the most interest by far.

When asked if he would be returning to Bowling Green for his senior season, the answer was an enthusiastic "yes".

Yep, that's the plan right now.  As a matter of fact when I am done here, I plan on going up to Bowling Green and continue my training up there.

As one might expect, Kantola is not sure what the future holds after Bowling Green.

I want to take the next step, wherever that may lead.  I know I'm going to play my hardest and do my best this coming season and see where that leads me.  I would love to give you a straight answer there, but I'm just going to try to take that next step and do whatever I can.

Hopefully, Kantola knows that the city of Raleigh, as well as hockey fans throughout the south, will be pulling for him as he takes that next step.

For more information, check out a video put out by WRAL's Ken Medlin at this link.