The tallest of all the players attending conditioning camp last week was also the youngest, seventeen year old Brian Dumoulin.   The 6'3 defenseman, who was the Hurricanes second round pick in this year's draft, is reminded of home by this area.  When I asked the youngster what his impression of camp was so far, this is what he had to say.

Raleigh is a nice city and reminds me of Maine with all the trees.  The whole Carolina organization is awesome.  They are pushing us to our maximum and trying to make us better, even though we are just here for a short period of time.

Can you give me an example of a new technique or something specific that they taught you?

Yeah, the coaches explained to me that when they are doing the two on ones the way that they want, they say it might take some time but always stay tight to that back post, don't be getting over because as you move up in the levels  you'll just get sucked in and they'll pass back door.  They definitely taught me some insight there.

What was your day like yesterday? (Wednesday, the first day of camp)

Dumoulin will be heading to Boston College this coming season where he will continue to work on his game.  Could we be watching him compete in the Frozen Four sometime soon? 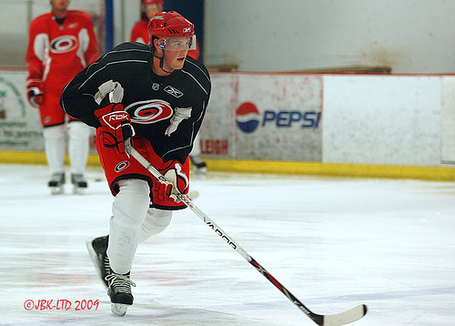