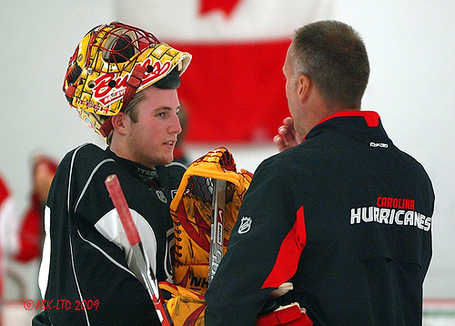 No one will ever confuse Carolina Hurricanes goalie prospect Mike Murphy with oversized peers Mike Smith or Steve Mason. Standing next to Hurricanes assistant/goaltending coach Tom Barrasso — who is 6-3 and looks close to his playing weight of around 210 pounds — during the Hurricanes' annual prospect coniditioning camp at Raleigh's RecZone, the 5-11, 165-pound Murphy isn't all that imposing, even in his gear. His small frame is even more evident once his pads are off.

But size isn't everything, as the entire Ontario Hockey League learned about Murphy — the two-time league goaltender of the year — over the past two seasons.

Despite going 36-7-4 with a 2.24 goals-against average and .929 save percentage, Murphy lasted until the sixth round in the 2008 NHL Entry Draft — he went undrafted in 2007 — when Carolina selected him with the 165th overall pick. His smaller stature and unorthodox style surely contributed to his slide down the draft. But Carolina liked what they saw, and a little more than a month after being drafted, Murphy was at conditioning camp, wowing fans and opening eyes with his acrobatic saves during drills — even a few on Hall Of Famer Ron Francis.

Off the ice, Murphy was as you'd expect a 19-year-old at his first NHL camp to be: excited, anxious, overwhelmed. After the session in which he stifled Francis and other numerous times, Murphy was asking the questions instead of answering them: "How did I do? Did I look all right?"

He certainly did, but that didn't mean there weren't things to work on for 2008-09. While Murphy's contortionist saves were crowd-pleasers at both prospect and training camp — he was arguably the best goalie at last year's Red-White game, outshining both Justin Peters and Daniel Manzato — Barrasso and the team urged him to focus on his fundamentals in his final major junior season so he'd be better prepared for his jump to the pros.

In returning to this year's conditioning camp — he and fellow 2008 draft pick Zac Dalpe were the only two back for seconds — Murphy not only looked more poised on the ice, but off it as well. The boyish excitement of last year was replaced with a confident, albeit tired, demeanor.

"It's been a long day, definitely," Murphy said following Thursday's RecZone session. "Up at 6 o'clock in the morning, but you work hard, you get better. Then you get on the ice with Tommy Barrasso. Any energy you have left, you put to that."

Barrasso has been widely heralded for the work he's done with Carolina starting goaltender Cam Ward the past two seasons. While Barrasso probably sees more of himself in the bigger, more traditional Ward, Murphy said his differing style hasn't kept him from learning a lot from Barrasso, who was awarded the Calder and Vezina trophies in 1984, plus won back-to-back Stanley Cups with Francis in Pittsburgh in 1991 and 1992.

"I think he understands my style," Murphy said. "He's been in the NHL for a long time and he's seen a lot of styles. He improved my game from last camp when he told me I played like [Marc-Andre] Fleury did early on: using a lot of energy, not in position as much. And I focused on that this year. I became more technical and I had a lot better year."

That wasn't easy, seeing that he was the best goalie in the OHL the year before in Belleville. But Murphy took Barrasso's advice, worked on his positioning and fundamentals, and got results. He again took home the OHL's Goaltender of the Year award, and his numbers with the Bulls improved to 40-9-4 with a stunning .941 save percentage and 2.08 goals-against average.

"I believe in Tom Barrasso a lot," Murphy said. "He gives me good tips to take away. He picks up on everything."

For his part, Murphy did some picking up of his own, adding some weight to a frame that last year could be best described as scrawny. While Murphy will never be considered big, it was clear in his face alone that he had added several pounds in preparation for his first professional season.

"I put on some weight," Murphy said with a laugh. "I've been working really hard. [Carolina] sent me to a nutritionist and I got a one-on-one trainer. I'm taking it a lot more seriously."

With Ward entrenched as the team's No. 1 and one year remaining on backup Michael Leighton's contract, Murphy will likely battle Justin Peters, the No. 1 goalie in Albany last season, for the starting job with the Canes' top affiliate.

"I'm not sure what's going to happen," Murphy said of his destination in 2009-10. "I'm just really happy to get the contract. I'm just going to work hard this summer, put on some weight and work with my other goalie coach who taught me a lot in Belleville.

"I'm just going to come to camp and try my best and whatever happens, happens. Tom Barrasso and Jim Rutherford are smart goaltenders, and I'm sure they'll know where to put me."

With Rutherford indicating Murphy would be given the chance to compete for a spot with the AHL's River Rats in camp, the winner of the Peters-Murphy battle could have the inside track to back up Ward — assuming he's signed to a long-term extension — in 2010-11.

"It's my dream to some day play in front of the fans in Carolina," Murphy said. "I watched the playoffs. It's amazing. I'd love to be on that ice for sure."