Time is Short for Possible Kaberle Buy Out

Share All sharing options for: Time is Short for Possible Kaberle Buy Out

Now that Tuomo Ruutu is signed, the Carolina Hurricanes need to make a quick decision regarding the future of defenseman Frantisek Kaberle. Jim Rutherford mentioned a week or so ago that he was considering buying out the final year of the blueliner's 2.2 million dollar contract.

The buy out amount would be two thirds of the contract, or just under 1.5 million and it would be paid out over a two year period. The franchise would save about $733,000 in cash and also defer another $733,000 to be paid out the following year.

But even more important than the money, is it time to cut the club's losses with this player and move on? 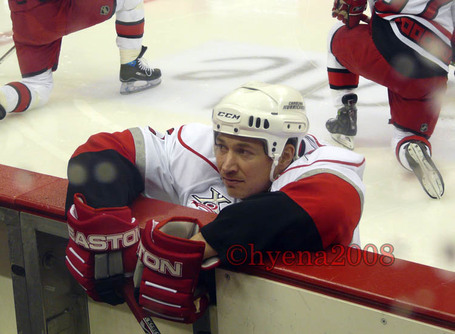 Since Kaberle's career best 2005-06 season, he has been a disappointment. During the past three years, the defenseman has missed over 100 games due to injury or being healthy scratched and has scored fewer goals and points over that entire three year period than he did during the Stanley Cup winning season.

Over the last two months of the regular season last year, Anton Babchuk outplayed him and forced him to the press box. While he was called upon to take over for Babchuk for a few games in the playoffs and performed suitably, he didn't really do anything in particular to inspire the Canes coaching staff into thinking that he had turned a corner and would earn a top six job this season.

The Czech native had major shoulder surgery in September of 2006 and has not been the same player since. Eventually, the Hurricanes acquired Joe Corvo and Joni Pitkanen to replace him and the need for yet another puck moving defenseman is not a priority at the present time.

Kaberle has been on the waiver wire at least twice and has been trade fodder for the past two years, with no takers. While his inflated contract might have been the primary reason why he was never picked up for free off waivers, his contract had nothing to do with him sitting in the press box as a healthy scratch for much of last year.

The Canes have now gone on record as saying that they are presently in the market for an experienced, physical defenseman. Kaberle has never played a physical game and it would seem unwise as well as unfair to expect him to fill that role now. Under these circumstances, it might be best to cut ties and move on.

On the other hand, he might be able to fill in on occasion like he did in the playoffs.

What do you think?

((UPDATE- Team has confirmed that Kaberle will be bought out))