Welcome to "Part 3" of our ongoing series of reports analyzing the varying degrees of success of the Carolina Hurricanes franchise.  We started this exercise back in June as we reviewed the Hurricanes draft record over the past 10 years.  In the next segment we totaled the club's regular season and post season wins since the lockout and compared those numbers with the rest of the league.

Now we will look at the Carolina market and try to determine how successful the Canes have been in developing it.

First of all, it's important to note that when the team arrived this was a brand new market.  There was an ECHL team, (Raleigh Icecaps), but there was only one public hockey rink in the area and the Hurricanes' home arena, (now called the RBC Center) had yet to be built.  And it certainly stunted initial interest in the team when fans had to drive an hour one way to Greensboro in order to watch home games during the first two years while construction of the club's new home was underway.

Not only did the franchise have to overcome those obstacles, but this was one of the smallest markets, (population wise), in the entire NHL.   Although apparently Peter Karmanos and company had a plan and they patiently stuck to it.

While the market was small, this was one of the fastest growing areas in the country.  It had a high tech, educated, and affluent population and northerners were moving here in droves.  What better place to grow a hockey franchise?

Attendance was dismal at first, but it has grown as the population increased and as the general public became more aware of the team.  Of course, winning hockey games is also a factor contributing to success at any box office.  Here are the year by year average home attendance numbers according to the Hurricanes Hockey Report.

The biggest drop in attendance came in 2003-04, the year after the Canes finished dead last in the NHL.  The biggest increase, (after the move from Greensboro),  was the year after the Cup win.  But the overall trend is increasing.  It would seem reasonable to assume that the positive trend will continue and that perhaps in 10 years or less, the average will be closer to a sell out, 18,680.

Compared to most other successful markets in the NHL, the one in Raleigh is still in it's infancy.

While the population has grown in the area, this is still probably the smallest market in the East, if not the entire NHL.  The following numbers are taking into consideration the total population from each city's general commuting area, as reported by Wikipedia.

It's true that the sheer number of people in a market, as well as a team's wins and losses, are major factors regarding attendance, but they are not the end all.  The New York Islanders are located next to one of the most populated areas of the country, yet they struggle at the gate.  The New Jersey Devils have won the Cup three times in recent years and have been a model franchise, but they have had their ups and downs regarding attendance as well, even with a brand new arena.

Last season the Canes finished 20th in the league, ahead of teams in major metropolitan areas like Los Angeles, New Jersey, and Denver.  How did they do it?

While Carolina has gotten criticism regarding the overall marketing of the team, (even from their owner), they have done an excellent job of growing the sport from a grass roots level in the local area.  There are now several more ice rinks in the vicinity than there used to be.  And they are all busy.

The local colleges each have competitive club teams, there are several adult leagues of varying skill levels, and most importantly, youth hockey has exploded in the area.  According to USA Hockey, the number of registered players in North Carolina has grown from 2,149 in 1998-99 to 6,128 last year, almost a 300% increase.

The Canes started out by holding summer hockey camps for youth at any skill level.  They would visit schools and invite kids to watch practice during field trips, (and still do this).  The franchise eventually became more and more involved in the local youth hockey programs.  Now they sponsor the extremely successful Junior Hurricanes and some of the team's players and other employees are very active in the Raleigh Youth Hockey Association.

Not only do these kids and their families represent a future generation of Hurricanes fans, but children of all ages are a common sight at Hurricanes games at the present time because management has done an outstanding job of creating a family environment at the RBC.

Believe it or not, tailgating was not allowed when the arena first opened.  But thanks to the complaints of fans and the efforts of then President, Jim Cain, they soon reversed that decision and Caniac tailgating was born.   Cain was a local lawyer who worked hard to build a positive relationship between the newcomers from the North, and the local community.  (Cain left the team in 2003 and Jim Rutherford then assumed the dual roles of President and General Manager.)

Putting aside all of those positive accomplishments for a moment, the club is still missing the boat in some areas.  Last season, a survey was released which indicated that the majority of state residents outside of the immediate Raleigh area were not aware of the team.   There is no question that the franchise could do a better job of marketing throughout the region.

Some of the team's own fans outside of Raleigh have a difficult time following the hockey club because radio and television broadcasts are limited or non-existent in certain parts of the state.  While coverage on the internet helps to fill in some gaps, it seems logical that the team should give as many fans as possible the ability to watch and/or listen to games throughout the entire state using traditional methods.   Improvements definitely need to be made in that area because you can grow regional interest and knowledge with better coverage.

What else could the team do to enhance regional awareness?  Why not have their AHL affiliate in state? 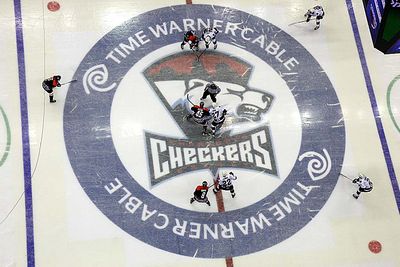 The Charlotte Checkers are an established ECHL franchise just two and a half hours away.  Not only does the city of Charlotte have a larger metropolitan area than Raleigh with a commuting population of over two million, they have a new state of the art facility where the games are played.

The ownership and management groups for both franchises could be under-estimating the positive synergy that a partnership would create.  Fans from Raleigh could travel easily to watch the team's prospects.  Folk from Charlotte would be more apt to make the trip to Raleigh to follow their favorites when they are called up.  This seems like a no-brainer, win-win situation.

Since the News and Observer's sports editor is located in Charlotte, there might be more cohesive and enhanced team coverage from that aspect as well.

Why hasn't this union happened yet over the past 12 years?  The two entities might look at each other as competitors, not as potential partners.  Charlotte is a long time ECHL mainstay with a loyal following, perhaps they can not, or do not want to leave that league?  Perhaps they can not get into the AHL?  While shuffling players back and forth would be cheap and easy for the Hurricanes, road trips up North would be expensive and long for the Checkers.

Another, more realistic option for a possible affiliate relocation would be in Norfolk.  The Admirals are already in the AHL and it has been rumored they might be looking for a new NHL partner.  But while the proximity to Raleigh is about the same as Charlotte, a new agreement with them would do nothing to help build or grow the market in state.

In summary, the Canes have done well building the market locally, but could do better.  It seems like they could do a much better job of catering to their fan's needs outside of Raleigh with better broadcasting deals.  The radio network at the very least, should be statewide.   They also need to do more to promote the team outside the Triangle and try to break into the untapped markets in the surrounding areas within the state.

Sometimes fans have the best ideas.  What do you think they should do to maximize the local and surrounding markets?