In tribute to Puck Daddy's "5 reasons why I love hockey" feature, I decided to give the task a try myself.  Also, a hearty thanks to those of you who requested this "important" information in emails.  Here goes nothing!

While there is little doubt how wonderful it is to grow up cherishing a sport from birth, to watch it every Saturday night on television with the rest of the family, and to play it morning, noon, and night, one reason I love hockey is because it has proven that it can become popular anywhere.  From deep in the heart of Texas to the palms of California, hockey is cherished by countless fans.

Here on Tobacco Road, some fans grew up loving the game while others are still learning it.  Either way, when fans come together to watch a game it's usually hard to distinguish between any different levels of passion.  Some people live, eat, and breath the Hurricanes and they have never even stepped foot on the ice. 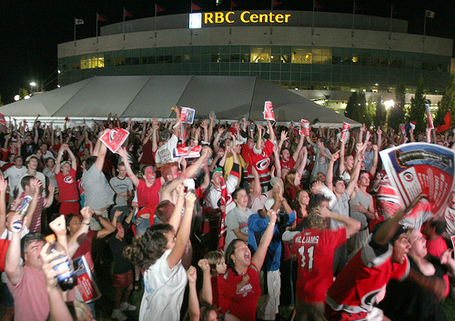 Fans are proud when they see local youth hockey succeed up north.  As the Junior Hurricanes continue beating their northern counterparts in the Quebec Tournament and the girls win games in Connecticut at the Polar Bear, more and more naysayers will someday have to admit that hockey can succeed in the warmer climates.

If you have ever cheered for an underdog, then you know how fans of non-traditional markets feel everyday.  And for these fans, nothing could be more gratifying than watching your underdog franchise succeed even though so many "experts" up north said it would be doomed for failure. You've got to love it!

How cool is it to be a hockey fan?  Pretty cool.  Let's face it, anyone around here can be a baseball, football, or basketball fan, but loving hockey could be considered unique.

It just feels special to be a hockey fan.

People are going to disagree with this, but I love the off-season.  (not more than the regular or post season, but I still love it)  You might have noticed with this blog that we have kept pretty busy here all summer long.  There always seems to be something going on.  July 1st is the busiest and most anticipated day of the year for hockey fans.  The NHL Entry Draft is the most important event in many player's lives.  Who can't get wrapped up in following the drama?

General managers are scrambling, trying to put together rosters and they are doing it while keeping under budget or within the salary cap.  Judgements are made as to player's values and career decisions are determined.  Games have to be won on the ice, but it is fun to watch the summer's events unfold as each of the 30 teams fight to put together the best possible group of players.

You do not have to be an expert of the game to recognize and appreciate the pure speed of it.  What other sport do players move at such a break-neck pace and ram into each other?  And don't even get started about the velocity of the puck.

Goalies can be an odd bunch.  What normal person would intentionally put himself in front of a puck moving 100 plus MPH?  But the goaltender can be the single most important position in all of sports.  Not only can a hot goalie steal a game or two for his team, he can steal a playoff series as well.

On the other hand, if the goalie is not on his game and continually allows soft goals, his team has little chance for victory.

Netminders are also allowed to be individuals within the team.  They wear masks with original artwork which is pretty unusual in team sports.  But if a goalie wants to wear a mask with weird artwork on the sides, who is going to argue with him?

Some quotes regarding goalies-

Arturs Irbe:  Being a goaltender is like being a minesweeper.  One mistake is no good.

Jacques Plante: Playing goal is like being shot at.

Brett Hull:  I'm not dumb enough to be a goalie.

Jim Taylor:  Goalies are three sandwiches shy of a picnic.

With so much respect coming from their peers, how can you not love goalies?

What are your reasons for loving hockey?  Share here.