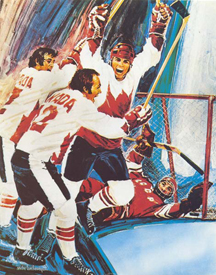 During the 2009 NHL Playoffs, Jussi Jokinen's place in Carolina Hurricanes lore was sealed. His three game-winning goals — two of which came in back-to-back games against the Bruins in the Eastern Conference semifinals — will forever be remembered by the RBC Center faithful.

The same goes for Scott Walker, who ended the series against Boston with his Game 7 overtime marker that released a flood of emotions — both personal and professional.

On a national level, there is surely no greater hockey moment in the United States than the Miracle On Ice.

For a moment, imagine taking all of these historic and memorable hockey events and rolling them together — in Canada. Meet Paul Henderson.

Henderson is a Canadian icon, having scored the game-winning goal with just 34 seconds remaining in the eighth and final game of the 1972 Summit Series, a head-to-head matchup between the best players from the Soviet Union and Canada. With the series tied 3-3-1 — and the Soviets making a controversial late-game decision that goal differential would determine the winner in the event of a series tie, which would lead to a win for the U.S.S.R. — and game knotted at 5-5, Henderson stuffed in a rebound to win the series for Canada.

But not only did Henderson score that miraculous goal. He also had the game winners in Game 6 and 7, pulling Canada from a 3-1-1 hole to propel his team to the series win.

As an American, it's hard to fathom the enormity of Henderson's heroics. But Sean Mitton, president and founder of Canadian Expat Network, and organizer of "An Evening With Canadian Hockey Legend Paul Henderson," compared it to the Miracle On Ice and the moon landing rolled into one. The game was broadcast live through school intercoms throughout Canada. Stores closed and workers huddled together to experience what turned into the biggest moment in Canadian sports history. In Canada, hockey is king — and there is perhaps no bigger royalty than Paul Henderson.

Now we can all have a chance to better understand the massiveness of Henderson's performance. On Wednesday, Sept. 23, at 7 p.m., Henderson will be at the RBC Center. Sean said there will be a video presentation of Henderson's performance at the Summit Series, followed by Henderson — who now gives motivational speeches — speaking to the group and taking questions. Tickets are $25 (online sales only) and there will be a cash bar, snacks and a silent auction.

Now, for the Canes Country exclusive: Sean is giving away four tickets to the event to the 12th person (Henderson wore No. 12) who correctly identifies the goaltender for the Soviet Union during the Summit Series. E-mail your answers to Sean at sean@canadianexpatnetwork.com and he will give the sender of correct answer No. 12 four tickets to next Wednesday's event.

A huge thanks to Sean for being a supporter of our site. I had the pleasure of knowing Sean before he started his new venture with Canadian Expat Network — and before I joined Canes Country — and he's a passionate hockey fan and good guy. If you, like Sean, are a Canadian living in the United States or elsewhere, be sure to check out his site for a chance to reconnect with fellow Canadians across the globe.