Share All sharing options for: A Closer Look: Jay Harrison

Jay Harrison was a free agent signing by Jim Rutherford which might have been a bit under the radar this summer, but Paul Maurice thinks that the young defenseman has a real shot to make the team.  The fact that the ex-Leaf was assigned to the "A" group this training camp proves that.  The Oshawa native finds himself in the thick of heated competition for the coveted seventh defenseman spot, (and perhaps sixth position if Pitkanen stays out longer than planned).

Of course Brett Carson, Bryan Rodney, Zack Fitzgerald, and Jamie McBain might have something to say about that as well.

I met up with Harrison for this exclusive interview on Sunday, September 13.

CC:  What has been the highlight of your career so far, or most memorable moment?

Harrison: My most memorable moment would probably have to be my very first NHL game playing for the Toronto Maple Leafs at the ACC against the Montreal Canadiens on Hockey Night in Canada on Saturday night.  It was a very big game and it was obviously a huge thrill, to say the least.

CC:  You had played for Paul Maurice a couple of times in your career.  Was he instrumental in getting you here?  Did he talk to you about the organization prior to your signing?

Harrison:  Well, yes he did call prior to the signing and we spoke on the phone.  He let me know about the organization from a personal standpoint.  The fact that we had a history together, he let me know what it was all about.  And everything has certainly been true.  It's a great group of guys and a really well run organization.  I am very happy and extremely proud to be here.

CC:  Can you describe your game for fans who might not be familiar with you?

Harrison:  Sure!  I'm a big, stay at home defenseman, who can contribute (on offense) when I have to.  But I like to take care of my own zone, make good plays, and play solid defense.  I like to use my size to my advantage and keep the house clean, so to speak.  And stick up for my boys when I can.  (see photo below)

CC:  What is your favorite sport other than hockey?

Harrison:  I really enjoy golf, despite the fact that I don't get a chance to play much anymore.  It's probably the only sport where you can sit down and watch it for four hours straight on a Sunday.  Right?

CC:  Do you have a piece of equipment you are most fussy about?

Harrison:  I would say my pants.  My pants need to fit right.  I have long legs and I kind of have a different type of pants, a long and lean style, so to speak.  They can't be too bulky in the back.

CC: and your favorite beer?

Harrison:  Well, they gave it to me, but I wore 43 in Toronto so I figure it's time to get one better in Carolina!

Here is a shot of Harrison "sticking up for his boys" while playing for Toronto. 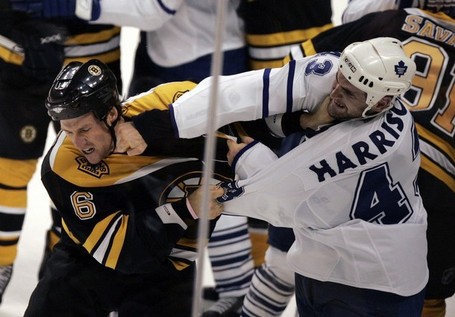