Thanks For The Memories, Bret

Share All sharing options for: Thanks For The Memories, Bret 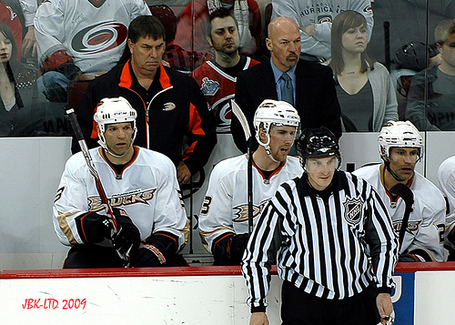 Hedican, left, retired from the NHL Wednesday. Photo by LTD

Today Bret Hedican — a veteran of more than 1,000 NHL games and a Stanley Cup champion — announced his retirement. Carolina Hurricanes fans remember him as a reliable defender whose smooth skating stride was perhaps the best of any player in the era. He was a key cog in two Carolina Cup finalists, including the 2006 championship team. On top of that, Hedican and wife Kristi Yamaguchi became the Triangle's celebrity couple, appearing in national ads for General Electric and garnering support from the area's population during her appearance on "Dancing With The Stars."

Like Luke DeCock mentioned in his column in the N&O today, Hedican was often typecast as an offensive defensemen because of his skating ability, when in fact he was best suited for a defensive role. He used his speed and transitional skating as a recovery tool in his own end. While not an overly physical player, Hedican did have ideal size for a defenseman, measuring 6-2 and more than 200 pounds. Couple his ability to use his size with his speed and the Minnesota-born blueliner made a niche for himself in the NHL for 17 seasons.

But without a doubt, Hedican's legacy will be his ability to fly up and down the ice.

My first real appreciation for Hedican didn't come from his play on the NHL ice, but rather his digital recreation. In the mid-1990s, I remember firing up the old Sega Genesis and playing season after season with different teams, trying to find the team that was the most fun to use. An all-time favorite? The 1995-96 Vancouver Canucks. Pavel Bure. Alexander Mogilny. Cliff Ronning. And, yes, Bret Hedican. If the concept of "speed kills" wasn't first spoken about using this team in EA's NHL game that year, it should be the definition.

Bure, Mogilny and Ronning raced up and down the screen, piling up goals for me while I blew by the opposition. And if the puck skittered into my own end, there was Hedican settling it and adding a fourth attacker to the mix. I could go coast to coast with Hedican, weaving through defenders,  dishing to one of the high-flying forwards or finishing the rush with No. 3. It was an unstoppable team that never became boring to use.

A few years later I was living in the Triangle when Hedican came to Carolina — along with, among other assets, Kevyn Adams — for failed experiment Sandis Ozolinsh. I recalled the pixelated blur of Hedican shooting up and down my 20-inch screen in my dorm room, embarrassing opponents with elusive dekes and mind-numbing speed. But I knew that, despite my love affair with Digi-Bret, Carolina was getting a reliable defender who could contribute as a puck mover on the back end.

Some expected him to be the offensive rearguard the team sorely needed, but I knew better. This wasn't the Hedican from Genesis, but instead a role player whose standout skating skill was a joy to watch, but not an offensive wizard. What I didn't know was how good Hedican had become in his own end. He was smart, reliable and determined. Even as he aged his skating was amazing to watch, but so was his positioning and commitment to the team.

He was the kind of player you needed to win a Stanley Cup. And not because he was skating circles around the opposition like he did in my dorm all those years ago. His skating was what stood out, but Bret was so much more.

Thanks for the memories — real and digital — Bret.