Clicks and Clippings: The second half

Share All sharing options for: Clicks and Clippings: The second half

With 46 games in the books, we've made it a little more than halfway through this wild fan adventure known as the 2009-10 hockey season with your Carolina Hurricanes. In that context, I've put together a flurry of mid-season reviews from around the web, and, more relevant to the state of the Caniac Nation, the beginning of the real-deal trade talk with the imminent arrival of "trade season".

Tropical Storm Warning Part II: Mid Season Review of Hurricanes Prospects | The Hockey Writers  by Dan Canavan With the New Year upon us, we thought it would be an excellent time to check back in with the 5 prospects that we highlighted

Puckdrops looks at the Hurricanes with a pair of Midseason Report Cards: The Forwards and Defensemen, Goalies and Coaches

Hart; Vezina; Calder; Norris: It's SB Nation's NHL Midseason Awards - SB Nation With half of the NHL season in the books, we take a look at the players that we think should win the NHL's major awards at this point in the season.

Trophy Tracker: Ranking hardware leaders at midseason - NHL.com - Midseason Report  NHL.com takes a look at the leading candidates for the NHL hardware now that the season is halfway home.

TSN.com's Scott Cullen: Midseason NHL Awards and Numbers At the midpoint of the season, Scott Cullen takes a look at the awards as well as a bunch of stats to perhaps provide some insight into what's happening thus far in the 2009-2010 campaign.

Sidney Crosby leads ESPN.com's list of midseason awards - ESPN Their pick for the Selke? Jordan Staal, Pittsburgh Penguins: He might just be the best penalty killer in the NHL.

If you haven't dared to look lately at those weekly power ratings, at least one website has the Hurricanes inching out of the basement: ESPN week 16.  All the way up to #28, the Carolina Hurricanes show up ahead of tomorrow's opponent, Toronto Maple Leafs (2-6-2 in their last 10) and the Edmonton Oilers (1-8-1). And The Hockey News has us up to #24.

Speaking of ratings, look who ended up as the #7 hockey blog for this NHL season.  A shout out to everyone here who writes, comments and reads. We make a good team.

After the jump, prospects, trade moves, and  some great podcasts including the birth of a new celebrity in our midst. You won't want to miss this, my Canes Country compatriots.

Prospects and the draft

Special draft edition of "On the Fly" to air on Monday, Jan. 11 - NHL Network  Tonight at 7pm a 30-minute special will air reviewing the top prospects for the 2010 Entry Draft set for Los Angeles June 25-26, which is in 5 months and 2 weeks. Just sayin'

TSN's hype of world juniors goes overboard Now that the collective national delirium known as the world junior hockey tournament is over,...

The Hockey News: Ken Campbell's blog: Jury still out on Eberle's future I’m certainly not about to suggest Canadian junior hero Jordan Eberle will be a bust in the NHL, but it would be wise to look at the history of this tournament before coming to the foregone conclusion that it’s only a matter of (short) time before he’s filling the nets for the Edmonton Oilers and filling their fans’ hearts with promise and hope.

Remain calm! All is well! No, really - NHL.com - Ice Age Canadian hockey fans, five straight World Junior gold medals and an OT goal away from a sixth isn't a disaster, it's a dynasty. My favorite new blog at NHL.com - worth reading for all this writers's chewy morsels from across the NHL.

Demographics may be catching up to Canadian junior hockey  More fallout and Canadian self-loathing from the WJC loss by Canada to Team USA last week. When silver just isn't good enough.

Trade-talk and other news & observations around the National Hockey League

The Hockey News: Adam Proteau's Blog: Kovalchuk mismanagement should spell end of Waddell As Feaster and I both noted, the opportune window to deal Kovalchuk has long since closed – and that’s why I believe the best Atlanta GM Don Waddell can hope for now is a deal that gets him 35-50 cents on the dollar. It won’t be Alexei-Zhitnik-for-Braydon-Coburn bad, but it’ll be close.

CapGeek.com -  Where to go to see which NHL players  are coming on the market this summer (and compare their current pricetags). I've linked the Carolina page, but you can click around from there. Lots to think about.

NHL -- Philadelphia Flyers forward Jeff Carter on trade block? Don't bet on it - ESPN Ray Whitney The Carolina Hurricanes are getting lots of calls on Ray Whitney (UFA July 1). He has a no-trade clause, so GM Jim Rutherford will approach him when the time is right and see if Whitney is interested. Carolina loves this player, so there's also the chance that even if the team moves him, it would still approach Whitney July 1 to try to bring him back. Whitney is a crafty, savvy veteran who has a Cup ring. He's the kind of pickup who couldreally help a contender, much like how Bill Guerin helped Pittsburgh last season.

Also from Philly, a chat with their current #1 netminder: Frequent Flyers: Leighton enjoying starting role with Flyers | Philadelphia Daily News | Michael Leighton said last week that he doesn't remember the last time he started nine games in a row - at any level, the NHL or the AHL.

For Caps, Enforcer Becoming Team Role - DCist The Capitals were up 3-1 over Ottawa in the third when Mike Green took Senators winger Jarkko Ruutu to the ground and brought the Verizon Center crowd to its feet. 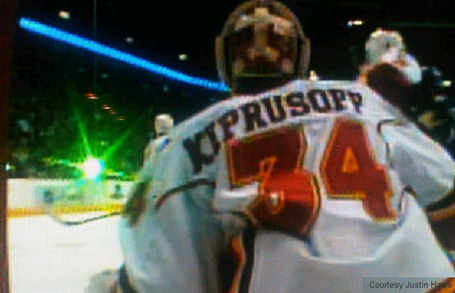 NHL wants less cussing - NHL- FanNation The NHL has sent out a memo asking team personnel to curb their use of profane language when talking to the media, Darren Dreger of TSN reports. Here's the first line of the memo, which may make John Tortorella's ears burn:

"Recently, we have had several instances of team personnel using inappropriate and profane language in media interactions and, in particular, in press conference settings....

Puck Daddy chats with Nashville's Ryan Suter about being U.S. Olympian, underestimating Preds and fighting Marian Hossa     Nashville Predators defenseman Ryan Suter(notes) is a hockey legacy: His father, Bob, was a member of the Miracle on Ice team in 1980; his uncle is Gary Suter, the former Calgary Flames and Chicago Blackhawks defenseman who won Olympic silver in 2002 with Team USA.

Olympic Rosters: The Salary Cap Edition - Fear The Fin  Team Canada's current payroll would place them 189th on the CIA World Fact Book's listing of GDPs, just between the Marshall Islands and Kiribati. It is approximately 4% of the US$3.3B bailout given to the auto industry by the Canadian and Ontario Provincial Governments.

The dulcet tones of Forslund on 620 the Buzz this morning.

The Hurricanes Report  From January 7th. Branecky and Hanlin cover Cam Ward, Olympians, injuries and a handful of recalls from Albany. Lots of good background as always.

And, as promised this is one no Canes Country regular can skip:  my favorite Editor, Cory "The Brain" Lavalette shows off how he earned that nickname, as he discusses the Hurricanes and the Caniac Nation on this entertaining podcast "Hurricanes Wash River Rats Ashore" at Jabberhockey.com on Sunday afternoon. This podcast is for the blog "On Goal Analysis"   Be prepared, readers: There will be a test.

Albany (is there anyone left down there?)

Rats notes ‘n quotes: Herauf back; Pistilli hurt - Hockey Spoken Here - timesunion.com - Albany NY After Saturday's 3-1 win over Hartford. Jeff Daniels said: "Tonight was a nice passing play. Jacob Micflikier is a skill player, Drayson Bowman’s a shooter. It was nice to see it starting to click."  BTW - Michael Ryan has been out a while with a lower-body injury. This after months recovering from a concussion while playing for the Canes pre-season.

The Infestation: Cavosie released; Canes lose Ruutu Even with the temporary signing of Cavosie, the Rats had been short one forward and were forced to skate defenseman Jonathan Paiement at left wing. But not Tim Conboy?

Manchester Monarchs: Peters, Peters, Monarchs Eaters Monarchs goaltender Jonathan Bernier stopped defenseman Jamie McBain in the shootout but could not hold off left wingers Jacob Mickflikier, Chris Terry or Drayson Bowman. Peters denied all three Monarchs shooters as centers Juraj Mikus, Corey Elkins and Gabe Gauthier could not find the back of the net. [ Alright - I chose this one for the headline]

Blanchard given 3-game ban Times Union - Albany NY AHL suspends Rat for hit on Phantoms' Maroon (This is a week old but worth noting. Nicolas Blanchard had a memorable fight in the pre-season game here vs the Thrashers.)

NHLPA.com | Ringing In The New Year  After his monster performance in DC , Eric Staal was their player of the week.

National Post : Mastering fine art of NHL slapstick They remain little boys inside the hockey uniforms of grown-ups, not unlike playground gradeschoolers. For his two seasons in Montreal, Tom Kostopoulos was the wicked, straight-faced joker most feared by his victims and most adored by those who weren't on the receiving end.

Some Free Advice For Hockey, From Someone Who Doesn't Watch Hockey - SB Nation

30. Carolina Hurricanes: I would sign six fighters and try to beat the heck out of the other team, "Deliverance" style, for the rest of the team’s home games. "Five fights or your money back!

By truck, out of the West - NHL.com - Inside the Equipment Room How equipment managers get a team from city to city. A facet of the NHL I never thought about. Nice feature.

Video: KHL brawl clears benches, ends game after four minutes - Puck Daddy  The stat chart is seemingly never-ending and you'll notice a lot of familiar names on the list such as Alexander Svitov, Anton Babchuk, Eric Perrin, Jakub Klepsis as well as some former minor league tough guys in Brandon Sugden and Darcy Verot who participated in today's fun. (I actually never found Babchuk anywhere - but still he must be in the mix somewhere)

Athletics Nation: The New Dating Hub? - Blog Huddle Hmmmm. You mean Canes Country is supposed to be a dating site?

NHL Network Online - Carolina Hurricanes: Skate With The Canes 2010 A closer look a player goal celebrations - this has been up since last week, but even so, I guarantee it will make you smile.