Share All sharing options for: Rat Stats: Does Younger = Better?

At the very beginning of the 2009-10 season, it was observed that our Carolina Hurricanes were the oldest team in the NHL. The average age of 30.24 years at the time was 6 months older than the next oldest group of veterans, the Detroit Red Wings, at 29.72 years old on average; and over 2 1/2 years older than the league average of 27.6 years.

The decision yesterday to recall Albany River Rat Drayson Bowman to take the ice for his first NHL game tonight here in Raleigh vs the Atlanta Thrashers got me wondering how far that average age has dropped if one looked at tonight's line up.

Further, as we watch the braintrust at Edwards Mill Road set into motion the revolving door between the Albany and Raleigh locker rooms once again (announced by tweets gone wild at 11am Friday) , I also thought it might be a good moment to look at the Rats' stats in isolation.

And finally, I ran some numbers to see exactly what's happened with the team's record overall since this youth movement got underway.

NB, readers, take this in context of all that's been analyzed and written the last few months. The numbers don't tell the whole story of what this Rat Pack means to the team, for better and for worse, especially when you talk about the singular elation of rookies finally living their NHL dream, and the frustration of veterans struggling to return to their best form, and perhaps even realizing that they never will. But the statistics are one piece of the puzzle, and I was curious. So, let's take a look.....after the jump. 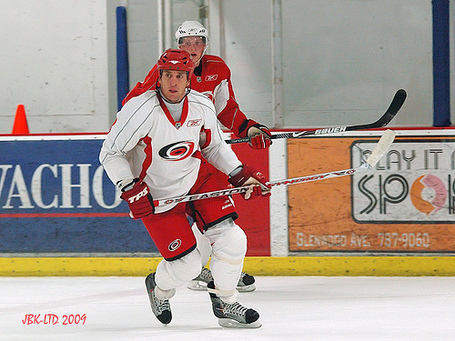 Brind`Amour and Bowman at the Reczone during Camp Brind'Amour, August 2009, via LTD

We all know the oldest player on the bench, Captain Rod Brind`Amour turned 39 last August. Our youngest Cane? Yep, Zach Boychuk, born October 4, 1989, which is six months after  Brind`Amour's NHL debut in the 1989 playoffs with the St Louis Blues (coached by Brian Sutter), on April 11,1989, when our familiar veteran captain notched his first NHL goal on his first shot, though still only an 18 year old kid himself at the time. (You think he doesn't get how excited these kids are?) Here's the birth order of  the rest of the current crew of call-ups:

And so, looking at the 19 starters who will be on the ice tonight, the new average age is now....28.59 years old, down 1 year 8 months from where we started in October. Still at the "older end" of the NHL spectrum, but moving in the right direction. (And the twelve forwards are, on average, 17 months younger than the six playing D.) Next, if we're looking for one statistic that indicates the growing confidence Coach Paul Maurice and his associates have in a player, it would be Time on Ice. Here are those TOI numbers (as average minutes/game) plus the usual scoring and penalty counts.

Those really aren't too bad, and do not support any suggestion that these guys are only getting bottom "we need a warm body" minutes. From what I've seen this season, the skaters with only 8 games on their gamelog (Boychuk and Tlusty) will see their minutes increase with a few more games of experience, just as we've seen with Sutter and Dwyer. Compare these to forwards Tuomo Ruutu  who averages 16:37 (on the season) or Scott Walker at 9:44. Among blueliners, defensemen Niclas Wallin averages 17:48 and Andrew Alberts has 15:28. (All these from NHL.com.)

And I know you're wondering: since the beginning of December, Brind`Amour has averaged all of 8:51 per game.

And don't forget to look at the scoring, the +/- and the PIM of this round of  Rats. Not bad, eh? No wonder the Caniac Nation is smiling, even as we linger in 30th place.

We know this rotation from AHL-to-NHL-to-AHL is a super way to provide the full-bore NHL learning experience to the players we expect will occupy many spots in the Carolina Hurricanes locker room next season. But I wondered: what about now? And really: What about us, the Caniac faithful? What have the kids brought to the team and its faithful followers these last few weeks? So I compiled those numbers too. 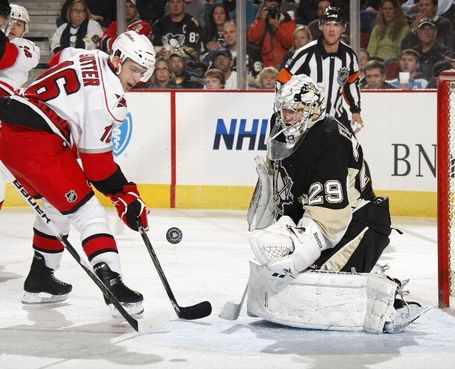 The night #16 played hockey while #17 sat upstairs in the Igloo (via a.espncdn.com)

I chose to take the December 7th game in Pittsburgh as the "before and after" cut-off. Why? Because that was the day Rod Brind`Amour was a healthy scratch, which according to his conversation with Chuck Kaiton earlier this week, was a first in his 20-year career. If you'll pardon the expression, that benching was indeed a watershed moment for the Hurricanes franchise and spoke volumes about the mindset of the front office after months of speculation as this season unraveled. Brett Carson played that night, and Jiri Tlusty played his first game at the Verizon Center vs the Capitals 3 days later. And the revolving door was officially put into operation the rest of December through today..

So, other than that single game in which Brind`Amour didn't play, what else has happened in the Hurricanes organization since December 7, 2009?

With that listing of events in mind, here are your standard team statistics over these last 18 games, beginning with that December 7th win over the Penguins in Pittsburgh, as compared to the first 28 games of Caniac Misery.

So, take a minute and look at the numbers. Has there been any improvement? I'll say. Given how bad those numbers were the first 2 months of the season, improvement was inevitable. When the mindset (if not the public statements) of the organization shifted to fully embrace the idea of transition and re-build, the improvement in the standard statistics measuring performance is unquestionable, remarkable, even stupendous. Other than a minor drop-off in Penalty Kill percentage, which is mitigated by the major drop off in penalty minutes, this is simply a stronger better hockey team since the Rats started to be a regular part of the mix. And, I'm glad to say, the positive effect has even shown itself  to be contagious. 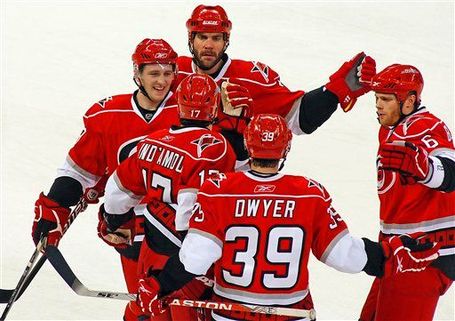 Brind`Amour is congratulated for his goal against the Senators last Sunday by Tlusty, Wallin, Dwyer, and Gleason   via a.espncdn.com

Here are my questions:

Looking at these numbers, do you think this is all about the influx of youth? Does younger = better?

Or is that equation just a good "hockeymom storyline" and the plain reality is that we now have those "franchise players" of Staal and Ward at 100%, performing at the top of their game and as required? After all, we knew in October that their less-than-marvelous play needed to improve before the team could turn the season around. And similarly, do you believe that with their proven talent and drive, Staal's and Ward's return to excellence is independent of this radical change in personnel?

We've lost a lot of key veterans to injury in the last 18 games. Are the kids called up from the American League actually more talented or just hungrier? Faster, stronger, healthier? Smarter? More confident?

Is it just the stamina and quickness of youth on the ice? Or is it a sign of a shift in the emotional soundtrack (and dare I say "leadership") in the room? After all, the young ones are living in the moment, hungry to stay, and so bring that spark of excitement to which Coach Maurice has referred this week, that is part-and-parcel of a boy's first games in the NHL.

Anything else you see from these basic stats that strikes you as worthy of note or maybe caught you by surprise? Any particular player's numbers impress you? (hint: look at Sutter's PIM, or Dwyer's steadiness - across the board)

And what do you think will happen to the roster, and subsequently, these  statistics as the six established vets, now injured and healing, return to the bench over the upcoming weeks?