Clicks and Clippings: The Untouchables

Share All sharing options for: Clicks and Clippings: The Untouchables

Sunday, I linked an article written by Chip Alexander of  the News & Observer which reported on his conversation with Carolina Hurricanes owner Peter Karmanos Jr when the team was in Detroit last week. In that piece, Chip focused on what he termed "The Untouchables", referring to this statement by Karmanos:

I hope we can build around five or six key players that we have that we think are world-class players....

So it seems that in the Caniac Nation, the Untouchables are that core group of players that Canes ownership will protect, no matter what offers are tendered, in this rebuilding phase of the team. Everyone else? Apparently they should consider themselves expendable, and maybe soon, as we near the impending trade deadlines. Again, this morning, another voice familiar with the inner workings on Edwards Mill Road repeated the phrase:

Forslund recaps loss, possible trades on 620 The Buzz - WRALSportsFan.com  Referring again to the Untouchables, John Forslund reiterates that it's a rough time for everyone in the room.

And you can see the debate among fans over at CanesNow yesterday - with a few familiar names (and their familiar opinions) in the mix.

According to both sources, these are the 5 (or 6?)  "Untouchables": Eric Staal, Cam Ward, Tuomo Ruutu, Tim Gleason, and Brandon Sutter. Add Joni Pitkanen as a maybe. After that, it's safe to say the rest of the men in Red are all feeling the heat.

This dark cloud looming over the locker room, the imminent but unknown trades in the works, seems to be the theme of the week among Hurricanes insiders, and I think we all anticipate some news in the next couple weeks as the February 12th Olympic Trade Freeze approaches. Here I thought we'd already had enough stress this season.

After the jump, looking at a collection of links about youngsters, pros, and Olympic hopes. And the hockey game you won't want to miss coming up Wednesday.

Having led with uncertain future of the vets in the NHL, I'm linking you up below with the other side of these deals:

The Picks, the Prospects and the pipeline

Trade or keep those draft picks? Ask Red Wings - thestar.com There is a certain chic to suggesting that little can be done at the trade deadline to help a team win the Stanley Cup. Interesting strategy on this frenzy of the trade deadline and whether GM's can really get it right.

Czarnik, Seguin each score twice, lead Whalers over rival Spitfires 7-4 - NHL.com  Czarnik also had two assists, while Tyler Seguin added one assist and took over the OHL scoring lead with 71 points. Michal Jordan, who has scored in eight of his last nine games, had a goal and two assists, while Ryan Hayes and Joe Gaynor also scored for the Whalers (26-20-1).

NHL Network U.S. to broadcast 2010 CHL/NHL top prospects game WEDNESDAY (tomorrow) at 7pm is your DVR memo. Watch as the Top ranked junior players to showcase their skills at annual CHL event. Windsor Spitfires (OHL) players LW Taylor Hall (ranked first) and D Cam Fowler (ranked third) will suit up for Team Cherry [Don] while second ranked C Tyler Seguin from the OHL's Plymouth Whalers will play for Team Orr [Bobby]. This may be the most important game a Canes' fan can watch this week.

The American Hockey League | Albany spark plug making his case Jacob Micflikier had signed a one-year deal with his third franchise in as many years, and was once again among the final players to be loaned to the ECHL before opening night. and now this from this morning: River Rats get a third all-star — sort of -  TimesUnion.com Although he recently was told by coach Jeff Daniels that he will remain with the Rats for the remainder of the season, Micflikier opted to honor his selection to the American Conference team for Wednesday night’s ECHL All-Star Game.

And more about the young players who we have seen play in Raleigh.

Tonight at 6pm the puck drops for the 2010 AHL All-star game with  River Rats Justin Peters and Bryan Rodney on Team Canada. Last night was the Skills portion of the event and the results show Peters had a busy night: The American Hockey League | 2010 Skills Competition I haven't seen that there is any available TV coverage of tonight's game here in the Raleigh market - but if anyone has info, please post it in the comments.

Peters, Rodney set to represent Rats - The [Troy] Record Sports It’s only fitting that Bryan Rodney and Justin Peters were selected to represent the River Rats in the American Hockey League’s All-Star Classic.

New Canes in fast lane - NewsObserver.com The Carolina Hurricanes have brought in players in revolving-door fashion this season from the Albany River Rats, their American Hockey League affiliate.

Puck Drops : Setting the rookies up to succeed  Brian LeBlanc posted this very pertinent piece over the weekend describing how he'd like to see these young kids nurtured. See if you agree...

From NHL Plays of the week: Staal's goal vs the Leaf's last week shows up at the beginning. Somehow Ward's maskless save did not.  and Cam Ward's save in Detroit sans masque appears at the 1:28 mark.

Last, a smattering of stories around the NHL

Leighton is Flyers' surprise between the pipes - NHL News - FOX Sports on MSN The motivational sign, one of many in the Flyers' locker room at their Voorhees practice site, hangs above the stall belonging to goalie Michael Leighton. I don't know anymore if the Michael Leighton story is a "feel good" one for us or not.

Patrice Cormier controversy rips open hockey violence debates - Puck Daddy The last few stages of the process (to determine punishment exacted by the governing body) also bring to a boil the debates forever tied to incidents like Rouyn-Noranda centre Patrice Cormier's headhunting of Mikael Tam of the Quebec Remparts, which sent Tam into convulsions in a horrific scene and sent Cormier off the ice indefinitely. Update on Tam's condition here.

The playoff push: 90+ points or bust - The Globe and Mail James Mirtle is forecasting what it will take for all 30 NHL teams to make the playoffs this season

The Hockey News: Campbell's Cuts: Terrible timing for Finnish injuries As of today, Finland is without one-third of its top two lines with Saku Koivu out with sprained knee ligaments and Teemu Selanne on the sidelines with a broken jaw. And if the Finns have any aspirations of even coming close to duplicating their silver medal performance in 2006, they’d better hope they can get one or both of them.

Here's a photo of the injury-in-action when the Kings' Jarret Stoll collided with Koivu's knee Thursday night. 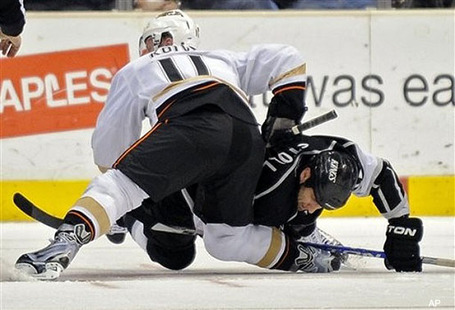 Speaking of  Team Finland, Jussi Jokinen spoke with Chuck Kaiton after the Atlanta game and the conversation aired during the game last night. Listen here if you missed it. He talks about how the Canes are working through the season and his personal disappointment on not making the cut for the roster for his country's Olympic hockey team.

Last, How Private Are Players' Private Lives? - Versus Discussion of the pitfalls of the internet and risks for hockey players, focusing on some problems in the Philadelphia Flyers franchise.