Clicks and Clippings: Pride of Carolina

Share All sharing options for: Clicks and Clippings: Pride of Carolina

Caniacs,the lesson seems to be to simply live in the moment and have faith that it will all work out. After the agony and doubt we experienced together last fall, your Carolina Hurricanes have shown us what we had been looking for since the summer. As Matt Cullen put it after the game last night, "I think this is what we all expected," Cullen said. "It's disappointing that it comes so late, but at the same time, it's there and we have a lot of pride."

This afternoon, the team is en route to Edmonton  (on U2's plane, again?) on the first leg of a "4 games in 6 days" roadtrip, starting off in Alberta, Canada where they will be facing a couple teams with a few developing stories of their own. I've got links to this morning's big trades in Toronto, after some re-caps from last night's win, and even some videos for you to enjoy during the flight.

Re-Caps of last night's game vs the Hawks

Cam Ward was indeed the deserving first star of the night. - you can see the game highlights courtesy of NHL,com embedded video on the right. At  NHL.com, several of his mammoth saves are available to re-visit (including that dramatic stop on Patrick Kane in the final minute), but I liked this one to capture the intensity, agility and creativity required of Wardo to handle the offensive onslaught the Hawks brought to the ice last night.

Ward leads Hurricanes to fourth in a row against Blackhawks, 4-2 - Indy Week Blogs The January ‘Canes are the more attractive and confident older brother of the October/November/December ‘Canes…we’ll see if it lasts.

Hot Canes top Blackhawks on icy night - Canes - NewsObserver.com Chicago might be one of the most explosive teams in the league, but Hurricanes goalie Cam Ward stole the show in a 4-2 victory at the RBC Center.

News from the Western Provinces 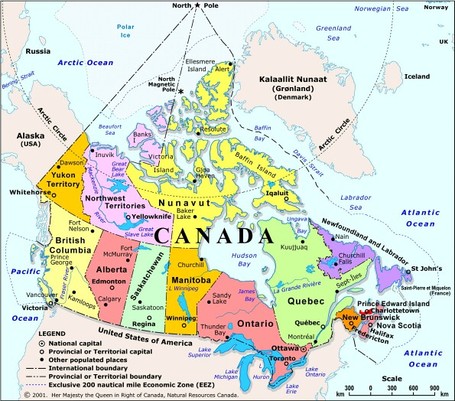 Edmonton and Calgary are in Alberta, which is over there, north of Montana. via www.davidstuff.com

Last night's hockey news in Calgary focused on the battle of Alberta, involving 2 teams both looking to end the embarrassment of  winless streaks. Captain Jarome Iginla was the standard bearer as the Flames (our opponent Wednesday night) routed the Edmonton Oilers (our opponent Monday night), with final score was 6-1. Edmonton is now winless in 13 straight.

On the opposite end of this tale, it was announced this morning that the Oiler's D-man Sheldon Souray fractured his wrist in this altercation. That can't be good.

I'm proud to say that it never got this bad here in Carolina. Never.   CANOE SLAM! Sports As the Oilers get worse, the jokes get better EDMONTON -- The Oilers have cancelled today's skills competition. No skill.

Speaking of Calgary, this is breaking news as I type, but Dion Phaneuf is officially a Maple Leaf in a gi-normous trade announced this morning. TSN.ca' s Darren Dreger broke the story via Blackberry.

But this wasn't enough of a blockbuster deal for the Leaf's GM Brian Burke as the team have dealt goalie Vesa Toskala and veteran winger Jason Blake to the Anaheim Ducks for  Jean-Sebastien Giguere. When Anaheim extended their hot young goalie Jonas Hiller's contract yesterday, many guessed that Giggy might be headed out.

As for rumors about trade deals that likely have no substance, some involving Hurricanes, I found a few mentions for you to ponder (and maybe chuckle a bit):

Kovalchuk market cools | Bruce Garrioch | Ottawa Sun The Carolina Hurricanes may have asked D Niclas Wallin to waive his no-trade clause so he can be dealt to the San Jose Sharks.

From Larry Brooks' Slapshots blog at NYPOST.com If Hurricanes GM Gentleman Jim Rutherford has a notion of moving either Joni Pitkanen or Tim Gleason from his back end, the Rangers would stand on line overnight in order to get an early shot at either defenseman. Pitkanen has one year at a $4 million hit remaining on his contract following this season, and Gleason has two more at a bargain $2.75M. The Candy Canes also have Matt Cullen on the market as a rental. Brooks also hops on the Ray Whitney to the Penguins wagon.

The Hockey News: Sources: Lightning sale could be complete by end of weekend; Bettman blocked Lecavalier trade The Los Angeles Kings have emerged as the front-runner to get Lecavalier, but it’s believed they are unwilling to part with the package of players and prospects the Lightning is demanding. Sources say the Lightning has asked the Kings for defenseman Jack Johnson, right winger Wayne Simmonds, a prospect and draft picks.

At the NHL.com VideoCenter, these 90-second interview excerpts  with Eric Staal, Cam Ward, and Jussi Jokinen, were done when the team was in New York last week.

Eric Staal discusses the transition of the Captaincy and his hopes for Olympic gold next month.

Cam Ward on his "terrifying" injury and the repercussions.

Jussi Jokinen about the recipe for success, his legendary shoot-out prowess and his feelings regarding Team Finland.

Eric Staal also was featured in this video from the Hockey News: Though his NHL season may be a lost cause because of the dismal play of the Canes, Staal could still find success at the Games in Vancouver. Ryan Dixon takes a closer look at the new captain in Carolina.

Team USA: Some news you might have missed with everything else coming out of Toronto this morning: Olympic clock runs out for Injured Komisarek Burke, meanwhile, has several choices to replace Komisarek. Candidates include Pittsburgh's Alex Goligoski, Anaheim's Ryan Whitney, Atlanta's teenage blueliner Zach Bogosian and Carolina's Tim Gleason.

The Devils' Paul Martin, recovering from surgery to his arm in December, continues to be hopeful but is a longshot to be ready to play as well.

Let's hope Timmy packed his cellphone charger for the week.

While we're talking about Team USA's blueliners, I found a little more "dirt" about the Kings' Jack Johnson. From the Ann Arbor Chronicle: A new wrinkle in Johnson v. Lombardi - Jewels From The Crown

Another Staal getting a lot of attention these days is Jordan Staal who put his name in the record books this week. Jordan's Journey: Chronicling the youngest man in NHL history to 300 NHL games - PensBurgh Penguins center Jordan Staal has only missed 1 game in almost four seasons, and at age 21, the future holds even more promise than the past for the often over-looked center.

Last,  the Albany River Rats went down to the AHL powerhouse Hershey Bears by a score of 8-3 last night in PA. You can check out the Gamesheet: Albany at Hershey - Jan 30, 2010 to see that Casey Borer picked up 2 assists, his first points of the season (actually since suffering the broken neck in the bus crash nearly a year ago.) We have a new resource, the Flickr site of photographer Jennifer Bock, in Albany. She has kindly given us permission to share her photos of the Rats. Thanks Jennifer! Like having an AHL LTD. Here's one of Borer in action last week. 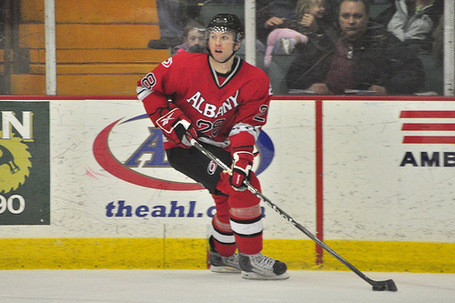