Share All sharing options for: "Blackout" For Charlotte Checkers On Friday Night

The Charlotte Checkers play their first ever game at home as an AHL team this Friday night as they take on the Wilkes-Barre/Scranton Penguins and they are planning a celebration of sorts to commemorate the occasion.  The first 6,500 fans to enter will receive black, Checkers third logo flags.  The first 7,000 fans will be given magnetic schedules.

The Checkers will be wearing their newly designed black third jerseys for the game and team officials are requesting that fans also wear black in support of the team.

Former Hurricane Jesse Boulerice and former prospect Joey Mormina, (all 6'6 of him) play for the baby Pens.  (Andrew Hutchinson was recently recalled by Pittsburgh).

The arena is set up to hold about 14,000 for hockey and officials are expecting a near capacity crowd.  Several Caniacs will be in attendance and as of today, there are still tickets available if you would like to go, (although section 115 is no longer available.)  Contact Mike Lappan at mlappan@gocheckers.com if you are interested in reserving some seats.

We were hoping to send a bus or two of fans down to Charlotte, but unfortunately, we could not sell enough seats so we had to cancel the bus reservation.   If you would like to ask about car pooling or caravan arrangements with other fans, feel free to discuss it at this fanpost, which was created a couple of days ago.

This is a historic event for hockey in North Carolina and Canes Country staff will be there covering it.  We will also have a special open game thread starting up at 6:30 Friday night for those of you who would like to follow along but can not make the trip.

As Puck Daddy Blog once said, "what says Carolina hockey more than a polar bear eating a flag?"

Other new southern hockey traditions will be born in Charlotte on Friday night. 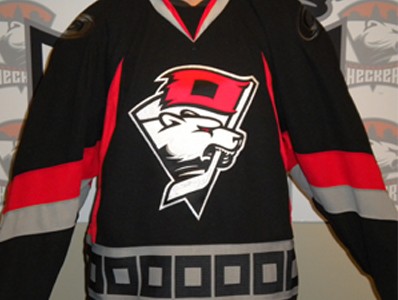