Charlotte Checkers Start Home Opener With A Bang But Lose to Wilkes-Barre/Scranton, 4-2

Share All sharing options for: Charlotte Checkers Start Home Opener With A Bang But Lose to Wilkes-Barre/Scranton, 4-2

Charlotte, NC.   The Carolina Hurricanes AHL affiliate, Charlotte Checkers, played their home opener and first ever AHL game in North Carolina on Friday night at Time Warner Arena in front of a near capacity crowd but dropped a tough contest to the undefeated Wilkes-Barre/Scranton Penguins, 4-2.

The Checkers production staff started things off with a pregame ceremony which probably would have made any NHL team proud.  After some pyrotechnics, dignitaries like AHL president David Andrews, Checkers owner Michael Kahn, and Hurricanes President and General Manager Jim Rutherford helped with the ceremonial puck drop and each member of the team was introduced to fans. 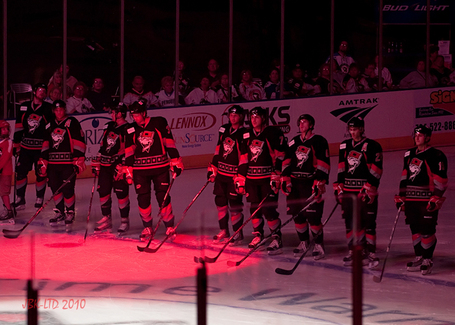 In an unusual move, Rutherford did not travel with the Hurricanes on their current road trip.  I spoke with him briefly before the game and the GM told me that he felt this inaugural game and event was just too important to miss.

"The partnership the Hurricanes have with the Checkers is very important and I felt that I needed to be here for this historic night," Rutherford said.  "I plan to be here the entire weekend and will attend Sunday's game as well."

The GM went on.  "This is also a great opportunity to watch these players and see how they are doing first hand."

Other members of the Carolina staff also made the trip from Raleigh, including Rod Brind`Amour and Glen Wesley.

The Checkers did not have the greatest of nights on the ice though as they fell behind 1-0 in the first period and ended up losing the game 4-2.  Still, the game had some bright moments as Jerome Samson scored in close during a 5-on-3 sequence to tie up the score, 1-1.  Jon Matsumoto had a great pass to set it up.

Matsumoto also started things off before the team's second goal.  He stole the puck at the blueline, then passed it to a fast-moving Zach Boychuk, who hit the post with his shot.  Oskar Osala was there to bang in the rebound.

That goal made it 3-2 in the third period and the Checkers had some momentum, but the baby Pens would score shortly after that to wrap things up.

Coach Jeff Daniels said after the contest that his team made too many "mental mistakes" in this game.

"We just have to be mentally sharper.  They are too good of a team to give them the chances we did," said the coach.  "Some of our guys are still trying to find their game, but they need to find it quickly."

When asked about how the transition of moving to Charlotte was going so far, the coach had nothing but positive to say.

"People are very excited about the team being here.  We've been well received," said Daniels.  "Obviously the rink here and even the practice rink are top notch facilities. It's been a short period of time, but so far the transition has been good."

Zach Boychuk also had great things to say about his experience with the city so far.

"Did you see the people out there?  It looked like a full barn," the winger said.  "That kind of atmosphere doesn't come by too often in the AHL.  We're very lucky to be here.  It's tough the way the game went tonight, but I think the future is going to look bright for this team and for this location."

Boychuk likes the look of the team and feels that once they come together, they will hold their own in the league.

Coach Daniels had the forward lines, (at least to start out with), as follows:

The Checkers will try again against the Pens on Sunday afternoon.

For more photos of the game by LTD, check this link.  I took an amateur video of some of the pregame hype.  Check that out below from our Canes Country You Tube Channel.