What Happened in Helsinki... Episode 12: Jälkikirjoitus

Share All sharing options for: What Happened in Helsinki... Episode 12: Jälkikirjoitus 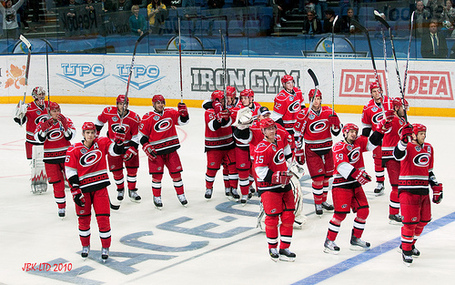 "It was great. They were doing the wave, and people were really loud. It was pretty nice because neither one of us was the home team. Thanks again for the Carolina Hurricanes fans coming over. 300 plus fans over in Finland, it's... it's great. Personally, I think they're the best fans in the world. I mean they're always so supportive, it doesn't matter how you play, they are always positive and cheer you and like I said, the best fans in the NHL."

Well, it is with very mixed feelings that I bring you this episode of WHIH, because it means the journey is officially finally over and it's time to wrap things up for good. Thanks to a kind friend I received DVD broadcasts of both games and have just able to sit down this weekend to relive them. I still haven't finished my photo albums (link here for what has been posted so far), Game 2 is the most complete with photos from the shootout, but I'll continue to work on them over the next week during our extended road trip.

Our WHIH t-shirts were a great hit both here and abroad. We had Finns in the arena and at the bars in Helsinki asking where they could buy one! I've been overwhelmed, yet again, by the number of folks who didn't get one on the first go-around who have now decided they can't live without one. I will investigate the possibility of a re-print, but I need at least 25 orders to make it worthwhile. If you're definitely in, leave me an email (you can find my email in my profile here, and yes, I do already have a few email requests) with the details – how many you want, how I can contact you for payment, etc. At this time I still can't guarantee another order and I can't guarantee that the price won't increase (but if so only slightly), but if there's enough interest I'm willing to give it another shot, and I'll publish a FanPost. I also ordered a few extras with the first printing, and after all of the shirts have been distributed (yes, there are still a few stragglers) I'll let you all know if there are any spare shirts floating around.

About the trip organizers...

Personally, I had no issues with AAA Travel, our trip organizers. However, I purchased the land-only package and while they booked my air travel, I was not part of the air travel group package. I've heard a lot of dissatisfaction expressed regarding the group air package, the logistics and travel route chosen, AAA's ability to manage a group of a substantial size, and general working knowledge of the area we were visiting. I am interested in additional feedback from travel participants, you can comment here or feel free to email me if you there is something you want to discuss privately, I will gather information and provide feedback to both AAA Travel and to Canes organization. They plan to work together in the future on other Canes-related travel events, so I think it's important that they get the feedback for future planning.

About our trip destination...

Helsinki was wonderful. It's a beautiful city filled with history, culture, and friendly people. We were smiled upon by the weather gods with no rain in the forecast and only a little wind and chill in the air. The Radisson Blu Plaza was an excellent base camp, convenient to sight-seeing, bars, and restaurants, and located beside the rail station with easy access to rail and tram service to other destinations. Tram and rail service was frequent and reliable. Language was never an issue, as the Finns are very proud (and rightly so) to be fluent in English. I had no issues with current conversion, most of my electronic gear only needed an adapter and I also had a voltage converter that worked without a hitch, but I did hear from a couple of people that their voltage converters either didn't work or blew out, hopefully all were able to recover.

Relative to here, Helsinki is an expensive city, with many everyday conveniences (food, bottled water, newspapers, etc.) being quite a bit more expensive, but public transportation and entrance fees (museums, etc.) seemed to be a little more reasonable. We caused at least one restaurant to run out of reindeer while we were there! Shopping was a success with many bringing home chocolates, candies, and knitted garments that are unique to Finland (my personal success was finding the euro version of NHL06 at Game Stop).

Well, it's a good thing most Finns speak English, otherwise I'm not sure the teams would have made it to the arena.

Now, about the reason for the trip...

Wow, did Caniac Nation ever represent in a big way. In my opinion the TV broadcast didn't come close to capturing the atmosphere in the arena in terms of our presence. Also not as noticeable on the broadcast was the CanesVision presence. In addition to producing several of the videos specific to the games (some of which have been published on CanesVision Online), they also brought a lot of RBCC audio and video footage with them. We had Ric Flair and Ariel Down and the Kiss Cam. We also had Caniacs representing in one of the in-arena contests. I'm not sure if it was a result of Compuware's sponsorship or for some other reason, but the in-arena experience was definitely Canes-dominated and had a "home game" feel. However, the overall crowd was tilted toward Minnesota, probably because Koivu and Backstrom are both bigger stars in Finland than our guys.

The Finnish crowd at the game was very male-dominated. There were more people in suits than there were in jerseys. I saw very few children, mostly adults. The empty seats at the beginning of each period were very noticeable on TV. If it wasn't explained before... Finnish law requires that all alcohol be consumed in bar areas and alcoholic beverages aren't permitted in the stands, so people had to finish their drinks before they could return to their seats. I also found the concession areas to be more congested and slower than ours in terms of turnover.

While the overall crowd was predominantly male, the Canes traveling crowd was tilted toward the fairer sex. It didn't sound that way as much in the arena, but during a delay to fix the clock, you can clearly hear the female voices in the "Let's Go Canes" chants coming across the TV broadcast.

Kudos to both coaching staffs for having all of the Finnish players on the ice for the opening faceoff.

In-game host Lauri Salovaara was excellent. I hear he's coming to Raleigh for the All-Star Game and I've also heard rumor that he may get an invitation here for a Canes game or two. Let's hope so, he's very engaging and entertaining.

Hartwall was VERY generous in terms of the latitude they allowed us with our cameras. I feel like we were given some special dispensation in that regard. Again, it could be the Compuware presence, or just Finnish hospitality toward their American guests in general, but I got the sense that the staff at Hartwall went out of their way to make sure we were accommodated while we were at the arena. We were treated very well.

If you're wondering about the stick salute at the end of the game, I think Chad LaRose was the instigator. This is what I can piece together from the series of photos I took after the game. As the players were congratulating each other, Chad was the first to skate over to the bench gate, followed by Tuomo and by Jeff Skinner. Chad conferred at the bench with Ron Francis then turned around to Tuomo and Jeff, and the three of them skated through the line spreading the word. You could see Chad's enthusiasm as he led the team over to us for the salute. Tuomo was one of the last out and very deliberately skated way over to salute us before he headed off the ice. I noticed both Staal and Gleason at several times during the game glancing up at us with a little awe. And he was out there for what seemed to be an eternity, but Jeff Skinner looked right over at us and flashed a big smile before he landed his game-winning shootout goal. I think the kid must have ice water running through his veins. He's something special.

I think we blew away all of the previous fanbase representations in Europe, and it would be an interesting study to understand why. Is it because of the Canes organization in general and the relationship with its fans? The spending ability of core Canes fans? The Finns? For me personally, a lot of it was about the Finns. Of course my favorite player is Finnish, and I love that we have a core enclave of Finnish players on the roster and now in the system as well. From the moment our participation in Compuware Premiere was announced, I hoped that Helsinki would be the venue, so I was delighted when the location was confirmed. I would have gone to Germany, Stockholm, or Prague, because a Canes European road trip is not an opportunity I'd pass up, but Finland was certainly a bonus for me and to claim it was the trip of a lifetime would be an understatement.

As an organization and its fanbase, I think we solidified an already strong bond, and now have extended its reach to a new country. I will never forget the wonderful people of Finland, the laid-back vibrance and natural beauty of Helsinki, the warmth and hospitality of Hartwall Areena, and the joy of players and fans celebrating a special moment in the history of our hockey franchise.  Once again, as always, Hyvä Suomi and Hyvä Canes!