Clicks and Clippings: On the Road Again

Share All sharing options for: Clicks and Clippings: On the Road Again

Quiet around the Caniac Nation today, which gives us all a chance to look past our club and stretch the horizon a bit beyond the Carolina Hurricanes October 2010 World Tour which closes out this weekend.

An update on the NHL's ruling after Drew Doughty and Erik Cole were involved in an on-ice collision from the LA Times' Helene Elliot: Lombardi gets explanation on Doughty incident | The Fabulous Forum

"What they said is that [Cole] wasn't necessarily trying to hit Doughty but they both turned," Lombardi said. "Whether you agree with that or not, the logic, I get. It's not inconsistent with the way the rule is designed."

From Justin Bourne, former pro player, and son of NHL veteran Bob Bourne (a teammate of Brandon Sutter's father Brent) gives us his thoughts on how the League will navigate its way through this issue. The NHL and NFL: Go All-Or-Nothing On Head Contact | Bourne's Blog

But people are getting hit in the head so hard they're dying young. Others are being left "punch-drunk," as it used to be called in boxing (a euphemism for showing signs of brain damage). Yeah, not so awesome.

After the jump, we look at the Canes in LA, Skinner-talk, Prospect doings, and that Cornhole commercial we all enjoy.

None of the other teams that opened the season in Europe had to endure this unwelcome of a homecoming. The Minnesota Wild flew back from Finland and played three consecutive home games. The San Jose Sharksreturned from the Czech Republic and played back-to-back home games. The Columbus Blue Jackets came back from the Czech Republic with nine of their next 13 at home.

Planning continues to ready the city for the 2010 NHL All Star Game in January - now 100 days away. NHL All-Star Game gets Triangle push - DeCock - NewsObserver.com It feels like it was only a few months ago that the NHL finally announced the 2011 All-Star Game was coming to Raleigh. Actually, it was only a few months ago. That's how little time the Triangle was given to prepare.

Sooner than the January ASG is the Canes "Hockey Fights Cancer Night", set for November 3rd. Details on the night are here. Under the heading of "one of these [guys] is not like the others" , LTD snapped this image off her TV last night. (Bonus points if you knew that the less familiar face seated next to Jussi Jokinen is Bryan Tatum, the Hurricanes senior director of team operations)

The team took some time to attend a taping of Jimmy Kimmel Live last night, shown above. Here's a link to the show. If you're just looking for the Canes, you probably don't need to watch past Clint Eastwood segment. Apparently, afterwards they headed out for the "Annual Rookie Dinner" about which no further information is available. Is it wrong for me to ask if LA has a Sauna Island?

The team in on their midday flight to Phoenix today, and will play in Glendale at 9pm Eastern Saturday night. The Coyotes beat the Kings last night, with Lee Stempniak potting a hat trick in the 4-2 win. However, the biggest storyline from Jobing.com Arena was the pitifully low attendance figure, What 6,706 fans look like at a Phoenix Coyotes home game - Puck Daddy

Great overview of all of the top 12 picks of this year's draft, with the wheres and whys of  their situation looking forward to this current season. 2010 Rookies: Coming Or Going? The most impressive 2010 draftee through the first two weeks of the season, Skinner looks like he’s here to stay.

NHL.com did a similar piece with the nine-game limit fast approaching: Deadline approaching for 2010 Draft picks.  Surpisingly, Nino Niederreiter's future seems to be an unknown on the Island. And there is some debate about Taylor Hall as well.

Youth is served in the NHL - cbc.ca  which looks at the difference between 18 year olds entering the NHL now and a few decades ago, with observations from a familiar voice.

Rutherford chuckles when asked for a comparison between player training now and when he broke into the NHL with the Red Wings in 1970 at age 21.

This was posted in comments yesterday by Mullett (thank you very much!) and I'm linking it here because you'll want to watch the video of Barry Melrose heaping praise not only on Calder contender Jeff Skinner, but on his teammate Jussi Jokinen who he coached during their brief time together at Tampa Bay.  2010-11 NHL Awards and Trophies - Trophy Tracker - ESPN

Captain Eric Staal also talked about Skinner in this video on who he selected for his Yahoo!Sports Fantasy Hockey team here. Puck Daddy had this update on the special NHLPA and Y! Sports League yesterday, with video of Zach Parise's comments on playing GM.

And, here's one more video posted by NikeTraining last week, though it was taped in August, of Leafs' blogger Steve Dangle talking with Skinner at Team Canada's World Juniors Camp. At the close, when Dangle wishes him luck on making the WJC Team despite his small size, you realize how quickly life has changed for our talented young forward.

OHL Super Series teams announced with Justin Shugg, the Canes surprise pick up in the fourth round last June, on the list. His current OHL coach, Dave Cameron, will be coaching his team. This will get some press in November for sure. Shugg was not invited to the Team Canada camp that Skinner attended in August and has said it was his goal to play on the team. These games would be the right place for him to earn an invitation.

Hurricanes third round draft pick this year, 6-4 defenseman Austin Levi, a second year player with the Plymouth Whalers, participated in an OHL radio podcast yesterday and leads with his experience on draft day and at Carolina's training camp in September. Listen here (about 12 minutes total). They also ask him about the Whalers "Pink Out!" game to raise money for Breast Cancer Research, an annual event that is affiliated with the Barbara Ann Karmanos Cancer Institute. Levi's pink ribbon motif in his mohawk was particularly well done they say. Apparently Chad LaRose, an alumni of the Whalers, was a notable contributor this year. Below is an image from the highlights video of the actual game. 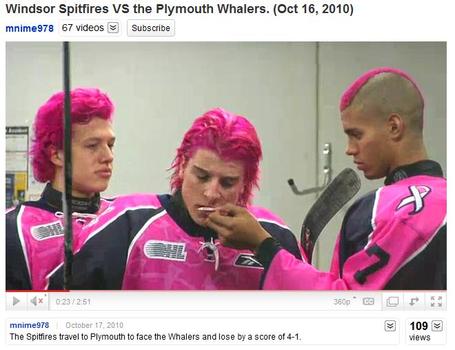 The Washington Capitals dropped two in a row to the Boston Bruins, and some of the natives are getting restless. On Frozen Blog › Be Concerned, Be Very Concerned Seven games in and in all but one of them (New Jersey) the Caps have underwhelmed.

A California blogger wrote this to describe the Caps precarious situation with their fanbase. Capitals Wandering Into Shark Territory It’s one thing to win games when a team has been struggling for a few years. But once fans taste success, sometimes winning in the regular season isn’t enough anymore…

And Owner/Blogger Ted Leonsis had this to say:  It Isn’t Them, It Is Us " Teds Take

I don’t like to read about hot goaltenders being the reason for our loss. Never have. If you are a good team, it is more about you than them.

Checkers lost in Albany Wednesday and move on to nearby Glen Falls to play Adirondack Phantoms (the Philadelphia Flyers affiliate and former team of Checkers' standout center Jon Matsumoto) tonight. Here's their Game Preview. Also check out the Flickr set from Sandpiper214 of the game vs the Albany Devils Wednesday.

The Albany media spoke to the players they covered for year after the Devils' game and posted a couple stories:

FitzGerald: ‘They’re great people to keep supporting us’ - Hockey Spoken Here,  timesunion.com  Although they again were the visiting team tonight, the Checkers, who were last year’s River Rats, felt appreciated by the small but loyal group of diehards who remember the four seasons in which the Carolina Hurricanes sent their prospects to Albany.

"Checkers searching for winning formula" from the DailyGazette.com focused on why the talented team is off to such a slow start, including these comments from Head Coach Jeff Daniels:

"Obviously, it's a loss, so our focus needs to be on winning games and right now it's not happening for us," Daniels said. "I thought we did some good things, but we've still got a lot of bad habits to our game right now. We're trying to do too much. When you're losing, you press a little bit. We've got guys whose intentions are good, they want to help the team win, but we're doing too much. The result is we're turning pucks over and we're not winning games."

Previewing the game tonight, the local paper includes a look at history of the teams and  former Phantom Matsumoto. Old foes and friends return to Civic Center with Checkers But make no mistake, the Charlotte Checkers are the chief nemesis of the Adirondack Phantoms. A year ago as the Albany River Rats, they humiliated the Phantoms, winning 10 out of 12 games and all six at the Glens Falls Civic Center.

Why can't every night be College Night?

Last, if you've been hearing about the new Cornhole Ad and don't live in the area to catch it when you're watching Canes' games on FSCarolinas, they have uploaded it on the Caniac Youtube site. Here ya go. Enjoy!