Clicks and Clippings: Home at last

Share All sharing options for: Clicks and Clippings: Home at last

The Carolina Hurricanes are back in Raleigh, North Carolina, with their World Tour now in the rear view mirror at last. Not only does this mean that their fans can watch them play live, and with a normal 7pm start when the Washington Capitals come to town Wednesday, but the Canes media department has lined up a full calendar of radio and personal appearances for many of the players around town.

The media scheduling guru on Edwards Mill Road, Mike Sundheim, posted this listing of the who's and when's on the calendar this week here: Guy Behind the Guy: Media Blitz '10. The week started off with Chad LaRose at 8am today, and then Cam Ward exchanged some chirps with the guys on 99.9theFan this afternoon. Jeff Skinner, who apparently is the hottest topic in town (no surprise), will be with Joe Ovies and Adam Gold on 99.9 tomorrow. Zac Dalpe will be at Carolina Ale House tonight for a Wing Fling with Ron the Ref at his side. It goes on and on.

And the Chad LaRose spot on G105's "Bob and the Showgram" shows up as this video. Different and kind of cool to see instead of just listening. This interview was not exactly for hockey sophisticates, but Rosey handles it pretty well. It's a great sport - the more the merrier.

After the jump, the latest posts both locally and around the hockey blogosphere, and a look at where our Southeast Division rivals find themselves eight games into the season.

From the Hurricanes official blog, Canes Make it Through Demanding Start - It was an adventure at times, but the Hurricanes appear to have survived the nightmarish schedule to open their season.

Canes home, at last - NewsObserver.com The players moved about the locker room quickly Saturday night, throwing gear into travel bags, dressing on the fly, ready to board the bus and get to the plane.

Canes Now - Canes happy to be back on home ice  from practice today:

"The attraction of our team is the youthful energy that we bring to this game," Patrick Dwyer said. "We're a young team, but we're still very skilled with mature young guys in Eric Staal and Erik Cole that are young but have been in the league and around the game long enough to bring that maturity level to it. I think we bring an exciting, fast-paced style of hockey."

All attendants in Canes parade win free tickets -  NewsObserver.com talks to the fans who were able to make the downtown march at lunchtime today, including some photos. For those of you who follow me on twitter I included some images on twitpic, which you can see here. Here's a sampling indicating that when they say the crowd of Caniacs attending today was small, you could take that a couple ways. 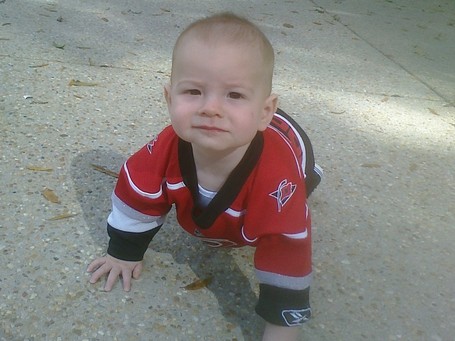 LTD photo sets - Everyone's favorite phoblographer made both practice today and the downtown parade. She's started her photo sets on Flickr and will get them filled out later this evening (after midnight even). Here ya go:  Practice set and Caniac March set.

Bits of news from around the League

Skinner definitely doesn't have to worry about returning to juniors. Hurricanes general manager Jim Rutherford told the Raleigh News & Observer on Oct. 11 Skinner would remain with Carolina. "We made our decision when we signed him," said Rutherford. "We felt strong about him right from the start." Entering the final week of October, Skinner was the leading scorer of the six rookies, with four points in seven games.

**LATE ADD: One last review of the Hurricanes' long journey home from Red Light District: Carolina’s Road Trip Finally Over A 4-3 record has to be what the doctor ordered for Maurice and company. They did have ups and downs once they got back to North America, but the overall trip was successful. And a programming note, RLD does a weekly podcast and tomorrow they will be talking with The News & Observer's very own Chip Alexander. Listen here live Tuesday at 1pm, or download later to listen at your convenience as a podcast.

The first NHL power ranking of the week are out: TSN.ca's Power Rankings has the Canes up from 24th to 19th with kudos' for Erik Cole's team leading +6. Just cause, I'll point out that the Caps drop from 5 to 16 noting that AO has no points the last 3 games, and is -3 over that span. I'm not sure that's good news for the hometeam.

Carolina plays its first game in Raleigh after opening the season in Helsinki and then traveling to the west coast. They host a Washington team that has been strangely silent offensively over the past week or so. Prediction: Capitals ruin Canes' homecoming in Raleigh.

Warning that this is not for the squeamish, but let's just say Miami University's Will Weber (a Columbus Blue Jackets prospect) doesn't need to worry about his Halloween costume this weekend. Don't say I didn't warn ya, now. Yfrog Image : Uploaded by Vaiver22 ........For the background on how this happened, here's the story about the defenseman. who's team by the way finds itself ranked Number 1 in the country after former #1 Boston College suffered a 2-1 upset loss at the hands of Notre Dame this weekend.

Looking ahead to those Capitals

Blogs focusing on the Washington Capitals have been busy sorting out if the team is in trouble in this young season. BTW, there are a lot of very good Capitals blogs. Here's a sampling:

On Frozen Blog › The Playmaker Perreault Makes an Instant Impact

He may be the smallest Washington Capital, but Mathieu Perreault’s presence was felt throughout the roster Saturday night when the Capitals beat Atlanta 4-3 in overtime. Perreault, less than 24 hours after arriving in D.C. from Hershey, got a deafening reception from the Verizon Center crowd when announced as part of the starting lineup, and he brought his signature energy-play to the ice from the moment the puck dropped.

The stretch of rest could give Green and Poti time to get healthy, but the grueling trip ahead keeps the burden on everybody else. "With three days off it's really going to help," Boudreau said. "We've played a lot of hockey and we've got a lot of banged-up bodies."

Storming the Crease: A 60-Minute Effort, Where Art Thou?

So far this season, the Caps have been outworked in nearly every game. Their skill is no longer enough to overcome opponents and cruise to easy victories. Ovechkin continues to stand out, but he's had bad games already in the small eight-game sample.

And check out the Washington Capitals Scores and Schedule at Japers' Rink  The Caps haven't won in regulation but twice this season (they are 5-3 overall), and one of those two wins was by a score of  2-1 over the New York Islanders. They're also averaging less than 3.0 goals per game.

I plan to be at practice tomorrow (at the RecZone it seems) and will be tweeting live. The big news this morning was that Brandon Sutter was not on the ice today, but Head Coach Paul Maurice stated afterward that Sutter just had the day off for "maintenance". According to Mo, he should be good to go tomorrow. The next big story this week is the return of Jiri Tlusty and what that means for Zac Dalpe and Drayson Bowman as the Hurricanes sort through what's best for the team to win and best for these players to continue to develop in the best way.