Share All sharing options for: Clicks and Clippings: Forward Rotation

As noted in the Game preview earlier, the news out of Madison Square Garden from Carolina Hurricanes' TV play-by-play voice John Forslund is that Coach Paul Maurice will be going with Patrick O`Sullivan and Jiri Tlusty when the Canes take on the New York Rangers. Sergei Samsonov will also play, which means two of the rookies who have been lingering with low minutes on the 4th line, Zac Dalpe and Drayson Bowman will be the healthy scratches.

The Canes Paul Branecky added these comments from GM Jim Rutherford via twitter:

RE: Bowman and Dalpe, Rutherford said both are doing well but "in the near future it may make more sense for them to play a lot more in [Charlotte]." Rutherford added that the experience of being around the team and practicing at NHL pace is valuable in short term.

This morning's News and Observer featured these two young players as it explored their thoughts on staying with the NHL club compared to the real possibility of being returned to the AHL affiliate Charlotte Checkers, as the more senior Tlusty (age 22) gets back to game ready condition . Some young Canes hang on with the big club - NewsObserver.com looks at these players and shares their perceptions of the situation.

Maurice spoke with the NY Press following practice, [Audio - 1:43] and among other valid topics (Jeff Skinner at the fore), Mo was asked about the match-up of Eric Staal and Marc Staal. They're brothers, y'know. Mo one-upped the questioner by adding Jared Staal's name in his answer. So, lest some of you have missed this oldy-but-goody, tonight is our first opportunity to break out the classic hockey party game from the 08-09 season: the Staal Brothers Drinking Game. Please note, post-practice interviews are not to be included in this game, even on Fridays. [And Canes Country and Hockey Mom urge you to always only drink responsibly.]

After the jump some more game previews, and news from around the NHL blogosphere.

Today's news about the Carolina Hurricanes:

Skinner Decision a No-Brainer - Tracking the Storm Blog The time for the Hurricanes to make a decision on Jeff Skinner is fast approaching, and it couldn’t be any more anticlimactic.

Bob's piece this morning shares some great insight from Paul Maurice on the status of Tuomo Ruutu taking on the role of third line center. Tuomo Ruutu Relishing Opportunity At Center - Canes Country. Don't miss it.

And on the subject of Tuomo Ruutu, LTD relayed this piece on twitter last night. No news is good news.../ Yahoo! Sports in which a move made (or not) by Ruutu on the ice in Ottawa a couple weeks ago is used to demonstrate progress in the most controversial (or is it just confusing?) addition to the NHL rulebook in some time.

Some guys have gotten the message. That struck Brendan Shanahan, just a week into the regular season, when he watched the Carolina Hurricanes’ Tuomo Ruutu, a player famous for finishing his checks, with the chance to finish another one.

Preview from Larry Brooks of the NY Post confirms that Evgeny Grachev, a 6-4 222 lb. rookie forward, called up from the Hartford Wolfpack (AHL) today, will get his first NHL start tonight, taking the place of the injured Aaron Boogaard.

Preview from NHL.com with some comments from NYR Coach John Tortorella on the Rangers' hot shot rookie centerman Derek Stepan who netted a hat trick in his first NHL game earlier this month,  but has cooled off considerably since.

Tortorella admitted after Wednesday's game that he has concerns about the play he's getting from rookie center Derek Stepan, he of the hat trick in his NHL debut. Stepan has no goals and 2 assists in the seven games since opening night and he was benched for the third period Wednesday. He's expected to be in the lineup Friday.

The Rangers have been struggling at home (record of 1-2-1), most recently with a loss Wednesday night to the Atlanta Thrashers by a score of 6-4, with back up goaltender Martin Biron between the pipes. This nifty goal by the Thrashers' Bryan Little early in the game to tie the score at 1-1, has gotten a lot of replays:

Focusing on the Canes youngest players:

A Bold Rookie of The Year Prediction | Houses of the Hockey

The way Skinner fends off opposition and protects the puck in offensive corners reminds me of Sidney Crosby. His speed, craftiness and creativity has already proven to be a nightmare for defensemen. Watching the Hurricanes on their recent Western road trip made me realize Skinner doesn’t just fit in with other NHLers, he excels.

Which was foreshadowed by this from the prospects blog at Yahoo! Sports in September: By the numbers, 'Canes smart to fast-track Jeff Skinner - Buzzing The Net

And Zac Dalpe may not get the biggest headlines around the League, but there are those in Canada (and here in Carolina) who are following his story closely:

In Raleigh, Dalpe bunks with another rookie — 18-year-old Jeff Skinner, a former member of the Ontario Hockey League's Kitchener Rangers. "All of the guys say he’s like my younger brother," Dalpe said, who has two brothers himself. "He’s a really great guy, always laughing and has a big smile.  I always think I’m making these really funny jokes when he’s cracking up, but then I see him have the same reaction with all the other guys and I realize it’s not just me."

And this on the whole Dalpe family, from his hometown of Paris, known as the "prettiest town in Canada":  For the love of the game - Paris Star - Ontario, CA The Dalpe family loves hockey; it's no secret. ...

Looking at other teams in the Eastern Conference

Laviolette Way OFFSides (2010) in Criticism of Players Millennials, depending on who you talk to, are anyone born in the 80's. We are a special breed and have proven to be extremely difficult to classify. We differ so blatantly from the Baby Boomers, Hippies, and Gen X-ers that came before us that sociologists, marketing execs, hell, the government, have all had trouble lumping us into one demographic.

This announcement that Nino Niederreiter will be returned to his junior team, also means that our own Jeff Skinner (b. May 16, 1992) is now the youngest player in the NHL. Below is a video of Niederreiter's response after getting the news from Islander management yesterday.

But first, as the deadline for returning players to their junior teams passes or nears for the 2010 draftpicks on the bubble, you might like to check out his article regarding: The unwritten agreement, or, Why did my team do that? which calrifies this occasionally confusing situation about who can play as professionals in the AHL and why those drafted out of the CHL (sometimes called "major juniors") is different.

There is an agreement in place between the NHL and the CHL (Canadian Hockey League, the overarching organization beneath which stand the OHL, the WHL, and the QMJHL) which exists primarily to protect the CHL.

With eye on future, Niederreiter sent back to WHL · islanderspointblank.com

Devils approaching panic point -  ESPN New York After a poor showing in San Jose Wednesday night, the Devils stumble into Anaheim to face the Ducks, where they'll have the best chance to claim a victory during their lengthy Western Conference road trip.

The Canes don't play the struggling Devils til January 1st, here in Raleigh.

Pittsburgh Penguins (3rd in the East, 5-4-1) who happen to be tomorrow's night opponent back in Raleigh.

'Comfortable' Evgeni Malkin becoming his own man - USATODAY.com Members of the sports media are always the last to know when Russian NHL players finally master English.

Good news seems to be in the offing for hockey fans who subscribe to Dish: Dish Network, Fox Close To Reaching Carriage Agreement Dish Network and Fox are close to cutting a carriage deal for Fox, FX, the National Geographic Channel and all 19 of Fox' RSNs, ending a bitter four-week series of high-level negotiations, according to sources.

The Charlotte Checkers are up in Binghamton, NY this weekend to play a back-to-back against the AHL Senators. Checkers Chatter introduced goalie Mike Murphy to the fans in this piece yesterday. Meet the Checkers: Mike Murphy | Checkers Chatter. (since it may have crossed your mind, I checked: there is no train service from NY's Penn Station - directly underneath Madison Square Garden - to Binghamton, so Dalpe and Bowman may get a bit of reprieve on re-assignment.). Here's the preview of tonight's match-up, also starting at 7pm.

SBN's all around hockey site From the Rink is simplifying the lives of everyone who tries to find a consensus among the dozen or so outlets who do weekly power ratings for NHL teams, with a new feature: Aggregated Power Rankings - From The Rink. The top three teams in the League are in the West, with the Penguins and Lightning rounding out the top five. The Hurricanes moved up from 20th to 16th.

I enjoyed this informal Q&A with Bob McKenzie, courtesy of The Hockey Guys.

Finally, Matt Cullen is having great success in his new threads up in Minnesota. However, this image was a little more than I expected from the State of Hockey. Happy Halloween! (This really is called a "twilight wallpaper"). 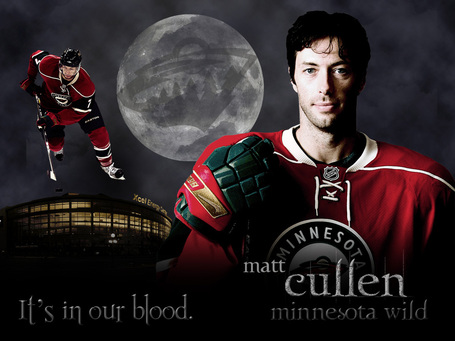