What Happens in Helsinki... Episode 9: Aikaerorasitus

Share All sharing options for: What Happens in Helsinki... Episode 9:  Aikaerorasitus 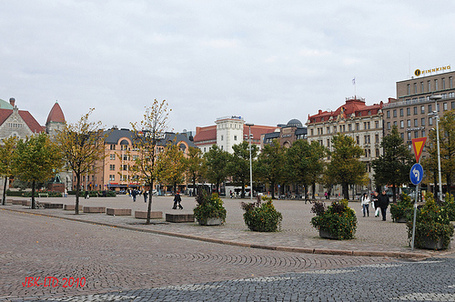 View of railway square and hotel from Helsinki Railway Station.

We touched down at 8:14 am Helsinki time (1:14 am Raleigh time).  There's not a lot to report yet; got through customs and baggage claim very quickly and arrived at the hotel before our room was ready.   I've only had the chance to check in and literally run out and snag some quick photos.  Our hotel is diagonally located across from the railway station at the opposite end of the railway square.  This is a very charming and picturesque area.  The city is pretty; lots of tree-lined streets and they're starting to get their fall colors.  More bikes on the street than cars today.  Overcast this morning and there's a chill in the air but I've been out in long sleeves and a light jacket and was comfortable.
The rest of the LTD family is asleep.  I've been up for over 24 hours straight myself, and trying to hang on until early evening to get on Helsinki time.  I'll collect my thoughts and will publish more later today as an edit to this story.
Oh, and I kid you not, this is the view from outside the door of my hotel room. 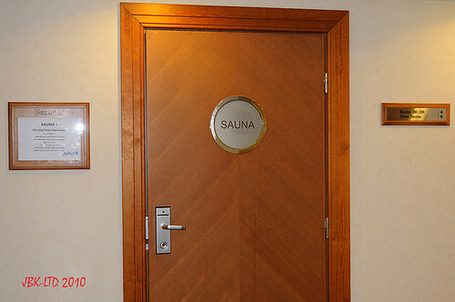 Just wrapping up the first day here and I'll throw out my first impressions.

#1 - The trip over... long but for us relatively uneventful.  Flying Finnair definitely added a coolness factor.  Coolest of all was the onboard video camera.  How much fun for an eight-year-old to actually watch the plane take off and land!  I mentioned before that getting through customs was a breeze; no forms to fill out, nothing to declare, just flash your passport and you're through.

#2 - Language is not a barrier. I planned to spend time learning Finnish but never did (except for the brief interactions with Google translate for this blog).  I doubt it would have done any good because it's nearly impossible for me to recognize any words spoken in Finnish.  But I haven't encountered anyone here yet who doesn't speak English.  The street signs are in Finnish and Swedish, but there is a good bit printed - billboards, signs, ads, etc. also in English and almost all restaurant menus are printed in English as well.

#3 - Finns are friendly but not overtly so.  Everyone has been polite and helpful, but not in an aggressive manner.  All you have to do is ask.

#4 - HEL-Looks is not as far-fetched as you might think.

#5 - The Radisson Blu Plaza (where a majority of travelers are staying) is very convenient to sight-seeing by foot as well as plenty of restaurants and shopping.  There's a casino directly across the street (don't plan to venture there myself).

*** Interrupting this update to let you know we just saw a commercial for the Compuware Premiere games on TV - Ruuu Hooo!!! ***

#6 - I've already crossed two must-dos off my list.  The first was the sauna, which was the 180-degree turn for me today.  I'm a night owl and west-to-east travel kills me, I dragged myself into the sauna this afternoon and left feeling completely refreshed.

Here are the sauna details for those staying at the Radisson Blu Plaza.  There are separate times for men and women.  You walk into a lounge area with lockers where you can leave your gear and change into your towel (huge towels are provided, like wrap around you shoulders to knees).  There is a restroom if you prefer modesty.  Then you enter a communal shower area where you're encouraged to shower before and after (the showers aren't private).  Then you enter the sauna itself.  Whether you leave your towel on in the sauna is up to you, when I was there today I encountered both toweled and untoweled people.  Guess what?  No one really cares.  Do whatever is comfortable for you but I highly recommend a visit (and FWIW, I am close to blind without my glasses, so no worries about being reported about in a future #WHIH episode).  Well worth it IMO mentally and physically (birch branch beatings to follow I hope).  Here are the times:

#7 - Plenty of restaurants in all kinds of price ranges and cuisines from Golden Arches to high end.  Tonight we ate at Raffaello which is just a few blocks from the hotel near the Ateneum National Art Gallery (Aleksanterinkatu 46).  I had a craving for Italian food but quickly changed my mind when I saw they had reindeer on the menu!  That was the second must-do on my list so no way I could pass it up. It was served (medium rare) over roasted potatoes with a port wine sauce (more like a gravy) and ligonberries (Finland's version of cranberries) and was absolutely delicious, tender and very mild, not gamey at all like venison is sometimes.  An expensive dish but highly recommended.  Mr. LTD had the salmon over tortellini, and ltd2point0 had a kid's cheese pizza.  All were outstanding.

#8 - We haven't ventured far yet but the area around us seems safe and clean, had no concerns at all about being out after dark.  We haven't been on public transportation yet but trams are all over the place and we've heard they're very well-run and convenient so we're likely going to be using them tomorrow.  It's a very European city, but there's something about it that makes it feel cozy, down-home and friendly, much like Raleigh in that regard.

#9 - One update regarding the team events.  We flew over with two of the AAA agents, and they told us that there are 321 people scheduled to attend the team luncheon on Wednesday.  Some of that group obviously booked travel through AAA, others were able to purchase tickets to attend the event, but all are Canes fans here for the games.  WOW.  Saw some Minnesota Wild fans in the hotel lobby today (actually they saw us first), and they said as far as they know there are around 120 Wild fans that traveled over for the games.  I saw that the Wild's open practice at Hartwall was really well-attended, we considered going over but conflicted with our check-in so we passed.

More updates to follow tomorrow, and keep checking flickr for new photos.  In the meantime, wonder if this store sells All-Star Game gear? 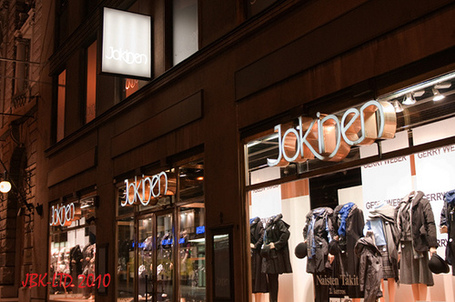