Canes Yet To Score At RBC: Penguins 3, Hurricanes 0

Share All sharing options for: Canes Yet To Score At RBC: Penguins 3, Hurricanes 0

The Carolina Hurricanes agreed to wear their white road sweaters so the visiting Pittsburgh Penguins could wear their blue thirds, and the jersey switch worked for the Pens as they broke their three game losing streak with a 3-0 win over the hapless Canes at the RBC on Saturday night.

Pascal Dupuis would score two goals, both on 2-on-1 breakaways, and Maxime Talbot knocked in another as the Hurricanes dropped their second straight home game by a score of 3-0.

Caniacs have not had much to cheer about on their home ice in recent games.  Dating back to last season, the Hurricanes have now been shut out 4 out of the last 5 regular season contests in Raleigh.

The team generated a few good chances, Jiri Tlusty missed an open net and Jeff Skinner came close a time or two, but the overall effort was not good enough to defeat the Penguins, who seemed to want this one a bit more.

Coach Paul Maurice seemed desperate to create something in the third period as he totally dismantled the lines.  They ended up as follows:

When asked about the change, he replied he was looking for more out of Staal's wingers.  We will have to see if he keeps the changes.

We will have more analysis and thoughts about this later.  Below are post game interviews of Tim Gleason and Paul Maurice.  There was also a notice on the white board for the players. 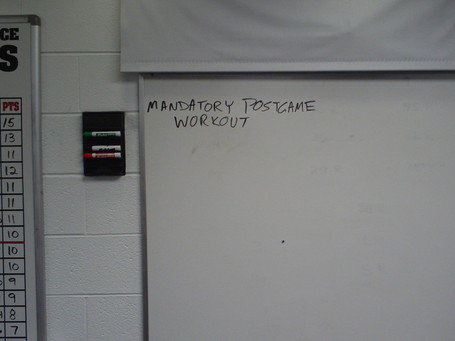