What's ahead in Charlotte: A look at the Checkers' schedule as the player rotations begin

Share All sharing options for: What's ahead in Charlotte: A look at the Checkers' schedule as the player rotations begin

Now that the Longest Roadtrip Ever (at least for the Carolina Hurricanes) has come to an end, it seems the anticipated rotation of players between the NHL club and its AHL affiliate, the Charlotte Checkers, will begin to gain some momentum. With Sunday morning’s announcement that two young forwards, Zac Dalpe and Drayson Bowman have been re-assigned to the minor league team and that AHL Allstar Jon Matsumoto has been recalled, with hopes of playing a career first NHL game after three years buried in the Philadelphia system, those predictions of a fluid young roster combined with the convenient proximity of the affiliate are perhaps now playing out.

The Checkers, like the Canes, had a tough schedule in October, playing just two of ten games at home, and those two against the still-undefeated Wilkes-Barre/Scranton Penguins. The Checkers close out October with a record of 3-6-1, sitting at a disappointing 12th in the Eastern Conference standings. Last night's OT win, following an OT loss Friday to the Binghamton Senators, earned the team 3 points out of 4 this weekend, and the closest thing they've had to feeling some momentum as they return home for what approximates a homestand this week.

In fact, Charlotte has a bunch of home games coming up in November; ten of the next eleven games are to be played at the TWC Arena in Uptown. But that doesn’t mean it’s an easy slate of games. This month, and for the remainder of the season there are some quirks of scheduling that had me scratching my head.  After the jump, I've got a closer look at the next three months of Charlotte Checkers hockey.

One month at a time 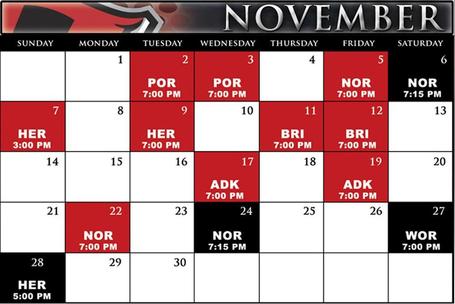 The Checkers November schedule: Red games are at home, Black are away.

Summary: 14 games, 10 at home, 4 away. Home games include 3 on a Friday night, one Sunday matinee

Highlight game: This has to be hosting the Hershey Bears, as the Checkers face the defending Calder Cup Champions for the first time since the former River Rats were swept in the playoffs last May. They play at 3pm next Sunday, November 7th (and back again on Tuesday the 9th).

I'll also highlight these next two games vs Coach Kevin Dineen’s Portland Pirates (Buffalo), coming to North Carolina with an outstanding 8-2-0 record. These would be great wins for Charlotte to get with Bryan Rodney, Zach Boychuk, Brett Carson, Bobby Sanguinetti, Jerome Samson, Oskar Osala, (among others with NHL experience) and now adding in Dalpe and Bowman, all working to earn a call-up to the big team. On the season, Checkers' Coach Jeff Daniels will now have the strongest roster he's had yet over the next week, that is until Jim Rutherford and associates decide to (or injuries require they) shuffle some more.

Are you kidding me? Checkers host the Bears next Sunday as the fifth game in six days, and the third in three nights, with the preceding Saturday night game in Norfolk (against the very hot Admirals) requiring a 6-hour overnight bus ride home for the 3 o’clock matinee.

Carolina Connections: That 5pm game in Hershey on Sunday the 28th matches, to the minute,  the NHL Canes traveling to DC to play the Bears’ parent club Washington Capitals. 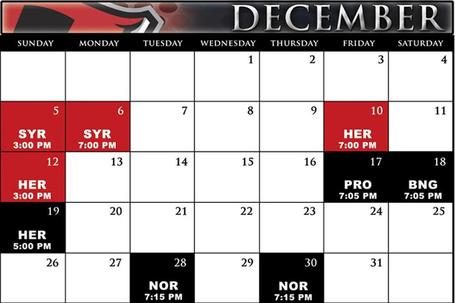 Summary: 9 games, 4 at home, 5 away. After a go-go-go November, the schedule lightens up to the point where one wonders how the team can keep in any rhythm. Home games include one on a Friday night, two Sunday matinees

Highlight game: Again I’ll go with the pair hosting the Hershey Bears on Friday the 10th and Sunday the 12th. The game vs the Syracuse Crunch, Anaheim’s affiliate, the previous Sunday is also worth the trip from Raleigh with the Canes in Nashville that weekend.

Are you kidding me? A rough challenge for the good guys when the Checkers arrive December 19th to Hershey, PA to face the Bears, again as a third game in the three days in three cities. That’s a total of eight overnight hours on the bus in the wintry Northeast before arriving for the 5pm start against the defending Champions in their own barn.

Then there’s nine days off, perhaps to go home and be with family over the holidays. I guess that’s one nice schedule concession one gets in the minor leagues. Not sure what that long break does for their hockey though.

Carolina Connections: For both home weekends for the Checkers, the Hurricanes will be playing out of town. So also consider attending either of the pair of games vs the Syracuse Crunch, Anaheim’s affiliate, as a [likely] less challenging opponent for the home team. 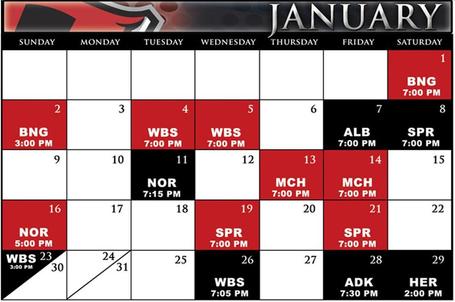 Summary: 16 games, 9 at home, 7 away. Home games include two on Friday nights, one on a Saturday night (a first this season on New Years' Day ) plus two Sunday matinees

Highlight game: These two are not the easiest to get to for working folks in Raleigh, but the back-to-back games on Tuesday and Wednesday January 4 and 5 vs the WB/S Penguins have got to be the key momentum games for the team. After those, the game on Sunday the 16th vs the rival Norfolk Admirals might also be important for the standings. (The Canes don’t play that night and Monday January 17 is the MLK holiday for many.)

Are you kidding me? Sixteen games in 29 days is always a grind, but the schedule of travel required isn’t nearly as ridiculous as in previous three months. Seems like they catch a break here, and let’s see if they take advantage and come into February positioned well in the standings.

Carolina Connections: The Canes play 14 games in January, plus host the All Star game. In the entire month, there are only five days in January when one of the two teams doesn’t see action. I'll call that hockey bliss for the fans.

To see and compare all the Checkers games and the Hurricanes games together on the same calendar, you can always refer to the Canes Country Calendar linked on the left rail of the front page or by clicking here.

I'll plan on another write-up on this topic in the new year to see what the spring season holds in light of the current AHL standings and the roster of players still in Charlotte then.

Take a look at the Checkers site where the team has variety of Events and Promotions you can take advantage of, including Sunday Family specials and midweek $3 Bud Light nights. Beyond that, several of the next few home games are part of a Groupon offer this week, with center ice lower bowl tickets selling at $12 each.