Clicks and Clippings: The Aftermath

Share All sharing options for: Clicks and Clippings: The Aftermath

Fair to say we're all happy to hear that the Carolina Hurricanes have arrived safely in Helsinki and look forward to the next few days including the opening of the 2010-11 NHL season at 12 noon ET, Thursday.

However, a lot of links came out from that event in St Petersburg yesterday which I have compiled here. The postgame video of Paul Maurice, Erik Cole, Jeff Skinner and Brandon Sutter are after the jump.

From the Hurricanes Paul Branecky: Canes Get Rough Welcome vs. SKA  The Canes weren’t expecting their exhibition in St. Petersburg to be excellent preparation for the start of the regular season. They were right. And the related slideshow.

NHL.com's Dan Rosen had this recap with some great quotes too. Hurricanes at Ska St. Petersburg

"I had no problem with our discipline," Maurice said. "As a matter of fact I thought we played a very disciplined game. It could have gotten to 30 or 40 (penalties) and I would have been fine with that."

A story specifically on the decision to pull Eric Staal overlaps a bit with the one above, but fills in the details too: Paul Maurice pulls Eric Staal for long-term benefit of Hurricanes

"Tonight was one of those games where you saw a lot of guys sticking up for one another, team unity," Cole told NHL.com. "That's good to see because we're going to need that."

Pictures from a Russian Journalist available on his facebook page, plus a few translated stories:

Interview with Tim Gleason immediately following the game: "I never fought with gloves."

An interview with Cam Ward that makes you wonder how much was lost in translation: "I WANT TO GET WITH RUSSIAN FOR QUEBEC"

Story on NHL fans in Russia because "We, the fans of the NHL are all a bit crazy. And yesterday was our day."

Lots of video, and more on the team after the jump.

KHL officials had a presser before the game announcing that some new level of agreement and cooperation had been worked out between their league and the NHL regarding player contracts. Unfortunately, it doesn't appear the two leagues even agree on that: Bettman says it's business as usual with Russian league As far as Gary Bettman is concerned, it's business as usual with the Russian-based KHL. The NHL commissioner said Monday that no formal transfer agreement has been signed between the two leagues. That tossed cold water on reports out of Russia which suggested a formal deal had been reached.

If you haven't seen the game highlights from NHL.com, once again admire Dalpe charging for the goal, Skinner spinning around the defender, and then Ruutu flying for the first goal. Then there's McBain's turnover, Peters' nerves and Pitkanen's nasty. Pitkanen's feed to Skinner for the 3rd goal is worth another look too.

If you prefer to see the less sanitized version of the game (to better understand what all the hullabaloo was about), this is the video sequence you're looking for.

Back stories on the Canes yesterday

My personal favorite: Youthful enthusiasm helping power Hurricanes - 2010 Compuware NHL Premiere Eric Staal is just 25, but the Hurricanes' captain now is one of the older players on his team.

"There is almost a goofiness around the team that keeps it loose and it makes it a whole lot easier for a guy to come in, especially at a young age, and feel comfortable. We're out here having a blast and it shows. It's fun to be here. Even the older guys are not very old." -- Bobby Sanguinetti

And here's what they're up to today: Sauna Island will provide taste of Finnish culture - NHL.com - Finnish Story of the Week   Tuomo Ruutu, Jussi Jokinen and Joni Pitkanen make up Carolina's Finnish contingent, but Jokinen and Pitkanen are from up north, roughly a six-hour drive or a one-hour flight from Helsinki. They'll each have plenty of family and friends making the trip for the games, too, but Helsinki is Ruutu's town, so it's Ruutu's show.

And this from Finland this morning,  as the Canes three Finns meet with the country's media after practice, tweeted by Mike Sundheim. 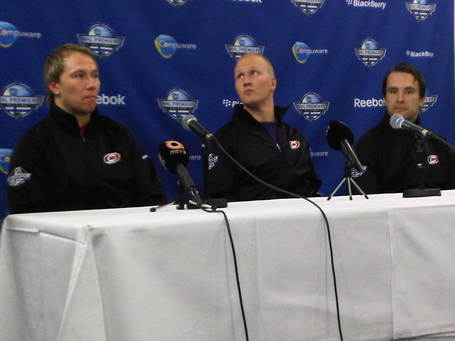 The Checker made some roster cuts yesterday and sent five players to the ECHL affiliate Florida Everblades yesterday. They include forwards Matt Beca, Mike McKenzie and Matthew Pistilli along with defensemen Trevor Hendrikx and Elgin Reid. Here is the current roster (now at 23).

Charlotte Checkers stick to growth plan in AHL move - Charlotte Business Journal Two weeks before the Checkers begin their first season with the Hurricanes and in the upper-level American Hockey League, team executives see several signs of growth. Start with a 45% increase over last year in sales of season-ticket and mini-ticket plans, a figure known in the industry as full-season equivalents.

Also remember to look at the new blog that the Checkers have initiated, to fill in with stories and links for their fans, called "Checkers Chatter".

A few worthy odds and ends

NHL Hockey Power Rankings - Week 1 - National Hockey League - ESPN Surprising to some, showing up at 14th overall, and 6th in the East: Your Carolina Hurricanes.

Which U.S. network will broadcast the NHL in its next TV deal? - Puck Daddy

Owners and team executives expect the new deal to dwarf those numbers. One owner told SportsBusiness Journal that he expects to see at least a 50 percent jump in TV rights fees. That would push the league's annual haul to more than $115 million and increase each team's take to $3.87 million a year.