What Happens in Helsinki... Episode 10: Invaasio!

Share All sharing options for: What Happens in Helsinki... Episode 10:  Invaasio! 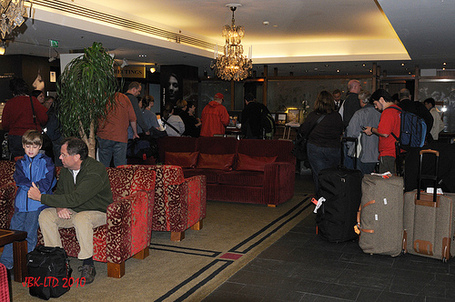 Helsinki will never be the same, folks. At least 300 Caniacs are reported to have invaded this beautiful city on the Baltic. The strongest surge appeared around 2:00 pm when there were enough Caniacs in the Radisson Blu lobby to completely eclipse the sun. A few stragglers found their way in later this evening. Despite rain, switched flights, checked carry-ons, surly US Air gate agents, cavity searches (okay I made that part up) and miscellaneous other delays and side stories, all parties now appear to be present and accounted for.

Today most newcomers spent their time unpacking and settling in, strolling around to take a first look at the city, sauna, dinner, and an early night. Those who came in early and are past their jet lag mainly spent the day sightseeing, I know a few groups have been over to Tallinn, if anyone has photos they're willing to share I'll make sure to ask for a link or post one on their behalf. Everyone seems to be trying the reindeer and finding it delicious!

Tomorrow we start activities with the team, practice at 11:00 am at Hartwall Areena and a team luncheon afterwards.

Speaking of Hartwall, I had a chance to stop by today. After reading online that there's a Jokerit store in the arena, we decided to do a little advance shopping. Well, we arrived to find the building locked, but in true Finnish can-do spirit, a kind security guard let us in, walked us to the Jokerit counter, let us pick out our merchandise, and escorted us downstairs to pay. He's one of the guards on duty tomorrow for the practice and is looking forward to seeing our enthusiastic faces. On the way out, I snagged a shot of the Compuware Premiere banner that's adorning the building. If you have a chance, click the link here and check it out in full resolution, I don't think the previous version that was tweeted over the summer showed that Joni is actually in the banner as well, beneath the main picture of Tuomo and Jussi (Antti Miettinen also represents for the Wild to complete the Finnish six-pack). 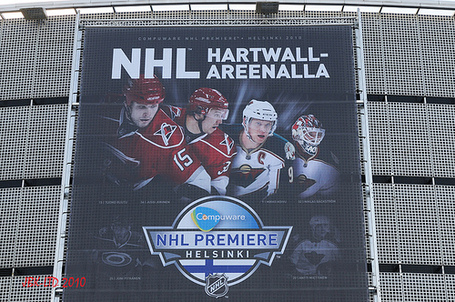 Speaking of the Wild, there are about 120 of their fans here and they were sighted out and about town as well. I talked with several on a side trip to Suomenlinna today, and RF and Cyn ran into a group walking around town. From what I've heard, their team luncheon today was fabulous, their players didn't skate and were well-rested and very engaged with the fans, making for a relaxing and enjoyable experience. Now, I'm not sure that with 321 Caniacs (as of last count) our lunch setting is going to be quite as intimate, but knowing some of our players, I have no doubt it will be quite entertaining. JR will speak, along with a local dignitary, and it should be a treat for all.

Helsinki is abuzz with Compuware Premiere media events, HMof2 posted several links and photos from earlier today, since her press, Paul Branecky has weighed in with an update (Canes Make it to Helsinki), along with accompanying photo gallery.  This afternoon was the player-only trip to Sauna Island, very curious that we've heard nothing at all regarding that little excursion.  Oh well, you know what they say about what happens in Helsinki...

I have a few (but not many) new photos posted on flickr, mainly sightseeing, and I'll continue to post new ones as schedule permits, because now it's time to get down to serious business with some Canes hockey! Hyvä Canes!