What Happens in Helsinki... Episode 11: Arvostus

Share All sharing options for: What Happens in Helsinki... Episode 11: Arvostus 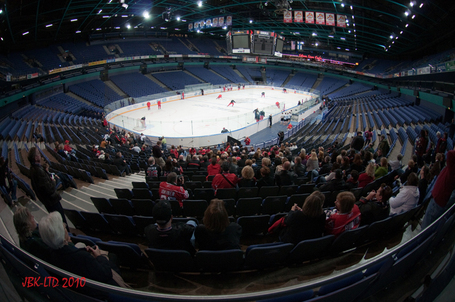 My son has a favorite saying: It's all about the love. Now honestly I'm not sure where he got that, and I'm not sure whether he's sincere or whether he's just trying to sweet-talk me when trouble is brewing, but it was the first thought that came to mind as I was reviewing today's events. It was a day of much appreciation between a hockey team and its devoted fans.

It's hard to describe the enormity of 250+ people boarding five buses and converging on Hartwall Areena for a team practice. It was wall-to-wall people outside the areena waiting for our security passes, and we consumed the entire length of our walk down the concourse. By the time we arrived, practice was well underway and the players were somewhat taken aback when they saw us filling up the seats in our section. I think many of them knew to expect a good representation, but to see the group live and in person seriously exceeded their expectations (as one well-known color analyst put it, "I was stunned"). There were several bursts of applause and "Let's Go Canes" chants, and the stick salute as formal practice broke up was a heartfelt gesture that will resonate with me for a long time.

After practice we boarded the buses again for a team lunch at a restaurant on the waterfront near Kauppatori. The luncheon was set up with tables for 8-10 people and featured a player or coach at each table. Bruce Oreck, the US Ambassador to Finland (yeah, I'll admit I want his job) welcomed us and offered his thanks for our visit while heaping great praise on the country that is hosting us. Team owner Peter Karmanos also acknowledged the outpouring of fan support and gave the team just a little nudge for a good performance to open the season. To a person the players and coaches were all gracious and attentive, and they stayed late into the afternoon for photos and autographs. Just my opinion, but so far the trip seems to be wearing well on the team, everyone is in very good spirits and excited about the next two days.

If all that wasn't enough fun... here's the highlight of my day. 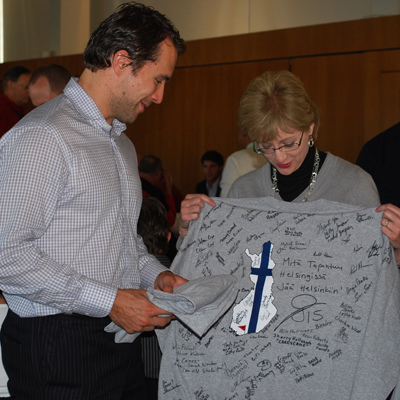 The Finn and the Phoblographer (photo from a friend) (flickr)

For his help in creating our wildly successful WHIH t-shirt, my favorite Finn received his own special version of the shirt, autographed by hundreds of traveling Caniac fans (along with a couple of other Finns and a color analyst who took the opportunity to make a Sauna Island reference). As if he hasn't been smiling enough this week, Tuomo had an extra large smile when we informed him that as part of the proceeds and donations received from t-shirt sales, we are donating $300 to his charity Plan International (a children's rights organization), and matching that with a $300 donation on his behalf to the Hurricanes Kids 'n Community Foundation.

Wrapping up the day, some fellow Canes Country posters and I had the great fortune of dinner with one of our twitter friends - sports writer, radio personality, and blogger Juha Hiitelä. Juha is just as kind and charming in person as he is in print, and he's been a great source for Canes fans for news, opinion, and translation services! We enjoyed a wonderful evening of food, wine, and thought-provoking conversation about hockey around the globe and life in general. Juha will be covering both of our games from the Hartwall press box, and we are looking forward to his analysis of the games and the fans (we did warn him we'd be ruuing).

We have an organized sightseeing tour in the morning before an afternoon of leisure, and then in a little more than 15 hours we'll be live at Hartwall when the puck drops to kick off the 2010-11 NHL season!

By now I have literally hundreds of photos to cull through and I'll continue to post what I think are the very best or significant ones although it will be a slow trickle as time permits. All albums will be off-shoots hosted here in my Helsinki photo album. Since we have back-to-back games with associated game and analysis threads, I probably won't create another specific WHIH article until after we return on Saturday. Until then, as always, Hyvä Suomi and Hyvä Canes!