Clicks and Clippings: It's good to win

Share All sharing options for: Clicks and Clippings: It's good to win

It wasn't necessarily a beautiful hockey game, but 2 points is 2 points, and the Carolina Hurricanes got it done. Jussi Jokinen said after the game that he hadn't felt that nervous since the playoffs in 2009. Is the monkey ftheir back? You know, that doubt, and maybe fear, that's been lingering since last season's abysmal start put many of us in a state of mourning for hopes shattered before Thanksgiving? Probably not entirely set aside, but it was good to start off with a win all the same. Very good. That last year's surprise gold-star players Jokinen and Brandon Sutter were the centerpiece of the win today makes it that much more re-assuring. Only one game, but an important one from which to build.

After the jump, a few recaps and post game thoughts, another collection of videos, as well as other developments across the hockey blogosphere today.

First a quick link to the Event Summary and Game Summary before reading the narratives.

From our newfound traveling buddy at NHL.com, Dan Rosen, Hurricanes at Wild - 10/07/2010  A three-goal second period by the Hurricanes was enough to hold off the Wild, 4-3, in the NHL Premiere game in Helsinki, Finland. Brandon Sutter scored twice to lead the Canes to victory.

He also had a couple other stories you'll like:

Finnish talent shines as NHL returns to Helsinki  "I was pretty nervous there in the third period," Jokinen said. "I don't remember when I was that nervous, probably playoffs."

From today's entry over at Rosen's daily blog: Dwyer may have saved game highlighting this observation from Head Coach Paul Maurice: "At the end of camp [Dwyer]'s one of those guys that always does the little things, and now he plays with Sutter and after the first game you say they look like they've got chemistry."

And here is the team's own Paul Branecky with his recap for Hurricanes.com On a team featuring four rookies, it was last season’s breakout stars that made the difference on opening night.

On Friday, the teams meet in the same place at the same time again, and the home team will be the Carolina Hurricanes.

"What happens on Friday?", was asked of Joni Pitkänen.

For a perfectly acceptable game synopsis in 140-characters or less, we turn to tennis pro and Greensboro native John Isner who is in China for a TPA tennis tournament this week. Isner, who also happens to be 6'-9" tall, tweeted:

Just woke up in Beijing to a canes victory over the wild in Finland. HUGE. Great start. Brandon sutter is a beast. Back to sleep now.

Your game highlights from NHL.com:

Then postgame with rookie Zac Dalpe, who notched an assist in his NHL debut:

Even more post-game video with Tuomo Ruutu [here] and Eric Staal [here].  For Jussi Jokinen [here] and Paul Maurice [here], we have audio only. Is it me or does Maurice really sound as much like a dad talking about how to keep his sons feeling good and confident about themselves than he cares about defensive systems and fore-checking?

Phoblographer LTD has been uploading all night, and you can take a look at her Flickr collection for the game still in progress. Another winner from the set below. My hunch is that these are the faces of those setting the screen when Anton Babchuk takes a backswing at the blueline: 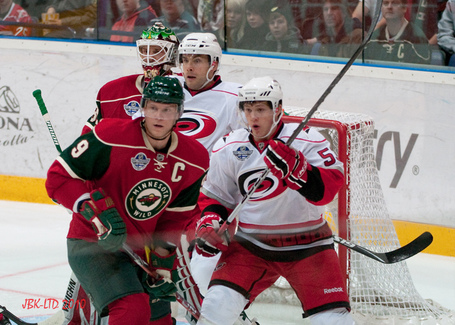 Finally, from the Wild's SBN blog, Hockey Wilderness,  it sounds like after one game (and one loss) they just might need to step away from the ledge. For starters,

I'm all for holding on to tired cliches such as "It's only one game," but the old patterns are still there. Old habits have not been broken, and it certainly appears as though Todd Richards has lost control of this team, if he ever had it.

Pregame features you may have missed

Raleigh's own News & Observer cranked out a number of great pieces on the Hurricanes to kick off the season:

Young talent highlights Canes new season The Carolina Hurricanes' season begins today in Helsinki, Finland, in the 2010 Compuware NHL Premiere. The Canes face the Minnesota Wild at Hartwall Arena and play the Wild again Friday in their first "home" game of the year.

Decock: Will Maurice's usual 90 points be enough? Ninety points. Mark it down. Plus or minus a few points, that's where the Carolina Hurricanes will sit when the season ends. Will that be good enough to make the playoffs? It wasn't in 2008-09 but it was in 2009-10.

Canes Now - It's Game Day in Helsinki Maurice's message: don't worry about mistakes, just go out and have fun. "They can do a lot of great things in this league, can win five Stanley Cups and win awards and play 25 years, but they only get one first game in the NHL," Maurice said.

Plus their own photo gallery introducing you to all the players.

Direct, though restrained, comments from NHL Deputy Commissioner Bil Daly today in Helsinki, regarding the future of the NHL's European Premiere plans. Good news for Helsinki - sounds like they'll be seeing NHL teams next October. However, after watching what unfolded with SKA St Petersburg Monday, he seems to say they're going to look long and hard before trying that little experiment again. Daly addresses future KHL exhibitions, Premiere

Here are Paul Maurice's well-chosen words following the game in Russia Monday, when he was asked to define how good Skinner was and what his potential would be, clipped by The Hockey News for their "Say What?" memorable quote list this week:

Couldn't overlook another review of Skinner in 15 words or less from the Minnesota Wilds' beat reporter, the Star-Tribune's Michael Russo, who tweeted about halfway through the game today:

Seen all I need to see from Jeff Skinner. He'll be a star.

You may know the Blackhawks fan and hockey blogger known as Hockey Broad, who was tweeting so much from the Hartford Whalers reunion and rally weeks ago (Ron Francis is her favorite). Today she was first to breakdown the opening day rosters for all 30 teams and sort through oldest, youngest, biggest, etc. What do you want to know? Well, check out the Hurricanes as second youngest team in the league (remember we were by far the oldest a year ago). Also, rookie Jeff Skinner (born May 16, 1992) is nearly the youngest in the league overall (only the Isles' Nino Niederreiter is younger). Carolina shows up at about average in height, but they are apparently the lightweights of the league, averaging barely 198 pounds. I say we blame Sutter. The whole series of lists is laid out clearly here.

Because it was just so unexpected to spot the Hurricanes names here, considering the source, you'll want to confirm you saw this for yourself. Three Clubs That Could Surprise This Season - Versus

The AHL's Eastern Division is the dominant group again this year, according to The Hockey News: Around The AHL: Pre-season rankings The second best league in the world gets set for puck drop Friday night and we prepare you with a ranking of the teams from 1-30.

Meet the Checkers: Jon Matsumoto | Checkers Chatter Yesterday it was Brad Herauf, and today Matsumoto is in the spotlight as the Checkers introduce Charlotte to their new team. (home opener a week from today!)

Finally, for me, seeing the familiar from a very different vantage point is part of the reason this past week observing the Canes travel through Europe has been so fascinating. Another example here. YouTube - Carolina Hurricanes practise [sic] from a Finnish hockey lover who attended the Hurricanes practice Tuesday in Helsinki, Finland.