Clicks and Clippings: A worthwhile trip

Share All sharing options for: Clicks and Clippings: A worthwhile trip

As Cam Ward put it: "Man, what a worthwhile trip." Amen.

[Instant digression: because it is so relevant to why the Hurricanes (and everyone who roots for them) is so relieved pleased to open the season this way. The Hockey News: Adam Proteau: Must-win games start in October The NHL season is underway, but rather than ease into the competition, teams have to start strong to keep their playoff dreams burning.]

Here's a super gallery of photos from Friday's game via the Finnish press, plus a few google-translated recaps and focus stories from Helsinki.

Ruutu is no longer räpeltänyt but räppäsi quotes Tuomo Ruutu (may translate at Tom Box or Diamond or Screen) to say:

- It's great that the first goal was just here. And it was still pretty good place. So happy to be. Here was a pretty great play. And in addition we were able, during the week with the team, to eat well and have a sauna, so a very nice week this was.

Skinner rate of NHL games -  www.jatkoaika.com has this from the teenager of the hour: I'm just trying to work hard in every shift. I'm playing with two excellent players (Ruutu and Jokinen), which makes it a lot easier.

Brind'Amour new role -  www.jatkoaika.com Former Hurricanes captain was his usual modest self and was surprised to journalists' requests to exchange a few words. "Hey, I'm not a player anymore", Brind'Amour said with a smile.

Skinner's moment, video highlights, couple recaps, and specifics to participate with me during my guest spot on a hockey podcast Sunday evening, for which I am the guest of significantly lesser importance... after the jump.

So how's about Jeff Skinner?

You'll recognize the name of Canes Country regular Raccoon Fink who captured Skinner's shoot out goal on video, and instantly got it on youtube. Skinner can thank him for the way it has now been picked up in the hockey blogosphere and facebook. (plus closing in on 1700 views at the site). As Yahoo! Sports hockey prospects blog, Buzzing the Net, put it:

Kitchener Rangers fans love-hated seeing this: Jeff Skinner scored the shootout winner for the Carolina Hurricanes on Friday, so it's too good not to post.

The Hurricanes Media Relations Director (and de facto campaign manager for the Skinner for Calder movement)  Mike Sundheim was still tweeting about the Skinner's shoot out goal after returning to Raleigh this morning, adding some statistical significance (courtesy of Elias Sports Bureau) to what was both a very cool hockey move and very cool hockey moment. Here's what he added:

Jeff Skinner is the 13th player to score in a shootout before netting 1st goal of his NHL career & the 1st 'Cane to do so. According to Elias Sports Bureau, Skinner yesterday became the youngest player to record a point in franchise history. Skinner was 18 yrs, 145 days. Prev. mark was Paul Lawless, who notched his first point at 18 years, 172 days in Dec. 1982. Skinner also became 3rd-youngest player to score in shootout, behind Sam Gagner (18 yrs, 76 days) & Sidney Crosby (18 yrs, 95 days)

Once more, 14 seconds for posterity:

And here is one very endearing postgame interview (yes, hockeymom is totally hooked):

This link will get you to the video highlights: NHL : Highlights: MIN 1, CAR 2 (SO).

And hearing Brandon Sutter recount what he saw from Skinner when Mo called his name to lead the shoot-out is first class shenaninganizing.

The Canes posted this slideshow of the best of their times in Helsinki.Sights of Helsinki - Carolina Hurricanes Photos

Recap of the game and the trip from Minnesota's beat reporter Michael Russo: Wrapping up Finland trip, and the difference in media culture | StarTribune.com Cam Ward was absolutely scintillating. I sat right behind him to the right, at least where he stood for two periods, for two games in a row, and when Ward is on, he’s as good as it gets in the NHL. And unfortunately for the Wild, he was on.

When twitter is the perfect medium: Again from Mike Sundheim, on board the plane before leaving Helsinki, who tweeted this image of Joni Pitkanen and his cocker spaniel Iiris who was enjoying the charter flight to her new home in Raleigh. Seems like the little pooch got distracted on her way down the 22" wide aisle. Imagine if you let her loose on a sheet of ice measuring 85 x 200? 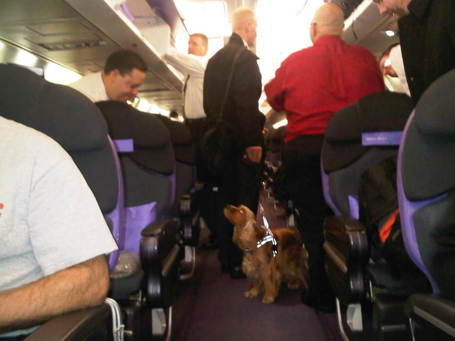 The fast-growing hockey podcast "CCPT" invited me to join them tomorrow (Sunday) evening, from 6 to 8 pm, where I will be a guest. We'll be talking about the Hurricanes and anything else that seems pertinent. Here's the link to listen - and please call in. I'll tweet a reminder before it starts as well. The weekly show is hosted by Su Ring and Cassie McClellan, who write for SBN's From the Rink (Cassie is also a lead writer for Tampa Bay's Raw Charge). That other "important" guest who will be on the air with me? Greg Wyshynski, known across in the hockey blogosphere as Yahoo! Sports' "Puck Daddy". (Now what the heck am I gonna wear!?... wait, never mind.)

Our Hurricanes and Carolina favorite Matt Cullen were not the only familiar faces participating in the European tour of the NHL this October. In Stockholm, Niclas Wallin and Mike Commodore are playing back to back. Here's a funny quote from Wallin after getting called for diving from the Taking Stock-holm with Lozo blog  "It is what it is. If he calls me a diver, I'm a diver," Wallin said. "That's probably the first diving call I had in my whole hockey and soccer careers. I don't know. It's part of the game and it happens. I've got the puck and I've got the advantage behind the net and I'm starting to skate straight up and he pushed my knee forward. If he calls that a dive, it's his call. But I thought it was funny."

Did you know that Teemu Selanne has a blog? And it's all in Finnish

On a more bad news/good news line, Atlanta Thrashers goalie Ondrej Pavelec seems to be relatively fine, all things considered, after collapsing on the ice, without any apparent cause early in the season opener versus the Washington Capitals last night. Once more, with reports flying on twitter last night, it was a strange way to start the season in Atlanta. What was also strange? After going winless in the preseason, the Thrashers handily beat the presumed titans of the Southeast Division, 4-2.

Just cuz: NHL Finishes Freezing Water For 2011 Season | The Onion - America's Finest News Source The National Hockey League announced Thursday that it had finished freezing an estimated 480,000 gallons of water, ensuring that every opening game of the 2010-2011 season would be played completely on ice.

Don't forget the Checkers open their season tonight at 7pm in Hartford. They've posted a game preview with links to listen online. Brett Carson, Justin Pogge, and Bobby Sanguinetti are en route, and though they won't play tonight, it's possible they'll go when the Checkers take on Springfield Falcons at 3PM Sunday.

Last, the Hurricanes practice schedule through their departure Wednesday for Ottawa has been added to the Canes Country Calendar as well.