Share All sharing options for: Five Observations: Flyers at Hurricanes

Cory missed the game last night because he was out enjoying himself at a concert.  (Shame, shame on him.)  We were thinking of skipping the "Five Observations" for this game, but there were a couple of extra tidbits I thought I would throw out there for discussion.

1.  Jeff Skinner is a primary target every time he has the puck, (and often when he does not have it.)  Opposing players are going to do anything they can to get the kid off his game, including dishing out physical punishment.  How much physicality can the rookie take?  So far he's looked durable and has bounced up, but eventually it would make sense that the constant beating will take a toll on the 18 year old.

2.  The Flyers are darn good.  This team didn't make it to the Stanley Cup Finals last year by accident.  The defense is solid, the goaltending is adequate, and the forwards are big, fast and skilled.  They looked very slick at times skating circles in the Hurricanes zone, zipping in and out of the crease area.  Some of their passing was elite.  On top of that, they have the ability to physically take over a game.

3.  The Laviolette Factor:  Since being hired by Philadelphia last December, Peter Laviolette is now 4-0 against his former team.  Remember when Peter Karmanos threw him under the bus a couple of months after management fired the Cup winning coach?  For those of you believing in Karma, Lavi may never lose another game to Carolina.

Check out the shot chart below, (from ESPN.com).  Four of the Flyers goals last night were on Ward's doorstep, well, not his doorstep, really they were in his kitchen.  The furthest goal was on an empty net, when Peters fumbled the puck along the boards.  The Canes did try some inside shots, but defensemen were all over them when they got inside.  But at least they tried. 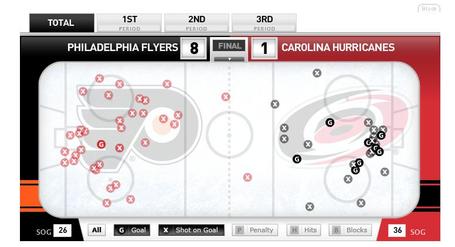 5. Can Carolina be physical enough?  Last night they showed a total incapability to clear their crease.  Bigger teams are going to be tough, if not impossible to stop.