Share All sharing options for: Clicks and Clippings: New Blood

Tonight we'll get to see the newest members of the Carolina Hurricanes franchise take the ice at the Penguins' new home rink, Pittsburgh's state-of-the-art Consol Energy Center. Look for steady Ian White and his moustache [which has its own video] wearing Canes jersey #7 on the blueline, paired with the ever-creative All-Star candidate Joni Pitkanen. And when Paul Maurice calls for the fourth line to head over the boards, we'll get our first look at Troy Bodie's 6-4, 214 pounds wrapped up in jersey #20, on the wing. Word has it Jiri Tlusty will sit, meaning it will be Patrick O`Sullivan and Jon Matsumoto matched with Bodie.

And we hear from @ice_chip at practice just now that Goaltender Justin Peters will get the start, which according to Paul Maurice, is about allowing Cam Ward to savor the win Wednesday. The Hurricanes will host the Nashville Predators back in Raleigh tomorrow night, and that may also be part of the coach's decision.

Here's two minutes of post-skate audio with Eric Staal from the Consol Center, as well.

**UPDATE: Two posts from CanesNow from Pittsburgh after the Skate: Canes Now - Pitkanen: playing with White should be easy  and Peters to get start against Pens

Meanwhile, Brett Sutter has cleared waivers and arrives in Charlotte where the climate, in every sense of the word, is much more hospitable than at his last assignment in Calgary. Perhaps because having one Staal and one Sutter on each of the two hockey teams in North Carolina was simply too much for Canadian hockey chauvinists to accept peaceably, Jared Staal is en route to Naples, joining the ECHL Florida Everblades.

From several reports, we're hearing there's still more work to be done by Jim Rutherford in the days or weeks ahead. Meanwhile, we've updated our unofficial salary chart to give you a snapshot of the bottom line as it stands today.

After the jump, more news on Ian, Troy and Brett plus other Hurricanes in the news,  updates from Charlotte and around the NHL.

Calgary Herald: Brett Sutter reflects on 'hard week' that culminated in trade On Wednesday night, Darryl Sutter told the Herald's John Down via e-mail that he definitely has mixed emotions over the deal. "Good opportunity though," he said. "(Brett's) a tough kid who has had to earn every step along the way."

The News & Observer had several stories on the trades and Ian White:

The N&O's print story this morning: White eager to join Canes Like many of the Carolina Hurricanes, defenseman Ian White was surprised by the late-afternoon trade Wednesday that should put him in the lineup tonight against the Pittsburgh Penguins. (yesterday's Canes Now post is similar: Canes Now - White surprised by trade, ready to get started).

Here's a similar write-up after the trade was made, published in the print edition Thursday morning.

Finally what better way to meet the new guy than a quick Q&A: Rapid Fire - Ian White, Calgary Flames Let's hope his defensive play is as steady and predictable as this [yawn] video.

The Canadian press has put a little more scrutiny into the Ian White trade than you might expect, due in part to the fact White was part of the deal between Brian Burke and Darryl Sutter last season that sent Flames' Defenseman Dion Phaneuf to the Toronto Maple Leafs. One sample:

In trading White, Flames pulled the trigger too soon - The Globe and Mail As with all things relating to the Flames and their ever-changing roster, the most puzzling aspect of White’s trade to the Carolina Hurricanes wasn’t the decision to move him, but its timing and its relatively modest return.

George Johnson of the Calgary Herald nailed it this week in a column proclaiming it was time for Brett Sutter to go: The kid needs a chance, away from the prying eyes and constant referencing to the man who's both his boss and his father, to try to make his mark. Maybe he's an NHLer. Maybe he ain't. But we, and he, won't find out until this umbilical cord is cut and he stakes out on his own.

For an overview on the state of the Carolina team at Yahoo! Sports, you'll need to skip to Overtime for some morsels from Jim Rutherford in Nicholas Cotsonika's weekly column "Three Periods":  No team’s start has been more insane than that of the Carolina Hurricanes, and yet they have 18 points. They’re one point out of eighth in the East.

He furthers his story by adding the following tidbit in the postscript:

Some mystery ’Canes deserve a lot of credit. "There’s been some guys that I’m not going to mention who have played extremely well based on their situation, because they’re actually hurting pretty good and probably shouldn’t have played," Rutherford said. "They’re still not 100 percent yet, but I’m pretty pleased with a couple of those guys."

First time I've seen confirmed what we've all suspected for awhile about those players who seem to be missing some "jam" the last few weeks.

Game Day news from the Pittsburgh side

Will it be Marc-Andre Fleury or Brent Johnson tonight? Penguins Notebook: Fleury's slump might be ending Fleury might not be completely out of the rut that he fell into early in the season but, as the Penguins prepare to face Carolina at 7:08 tonight at Consol Energy Center, he certainly seems to be headed that way.

And waiting patiently for new blueliners to round into form is familiar to the Pens fans too: Bylsma has high hopes for Michalek The Penguins have a pretty good idea of what Zbynek Michalek can do and what he can mean to this team. If not, they wouldn't have given him a five-year contract worth $20 million to lure him here from Phoenix back in July.

A look around the League

"I had the opportunity to play under Rod Brind`Amour, who to me is one of the greatest captains I’ve ever seen. I’m pretty good buddies with Eric Staal and I see how he approaches things and what he does. The list goes on and on there. There was Glen Wesley and Doug Weight and Mark Recchi and Ray Whitney and guys like that who I definitely learned a lot from at a young age on how to approach the game and what you need to do to be successful as a pro."

The New Jersey Devils are still suffering in their own franchise pergatory: Fire & Ice: Brodeur headed home to see specialist; Devils hold players only meeting following loss in Toronto For a mixed metaphor that perfectly symbolizes the state of the club: "We have to turn the sinking ship," said defenseman Henrik Tallinder after the closed door players meeting following the loss last night.

The Checkers face the Adirondack Phantom again tonight, after a come-from-behind 2-1 win Wednesday. Here's the Game Preview: Checkers vs Phantoms The Checkers have only one regulation loss in the month of November and are currently rolling along on a three-game winning streak. The team is finding ways to win game after game.

And this image from Florida this week really caught my eye when it was tweeted Wednesday  by Everblades fan and phoblographer, Lady Byng's Love Child, who tweets as @SwampHockey. That's Kyle Lawson with Goaltender Bobby Goepfert, who lost his catcher somehow, but continued to play bare-handed for two minutes before there was a whistle. 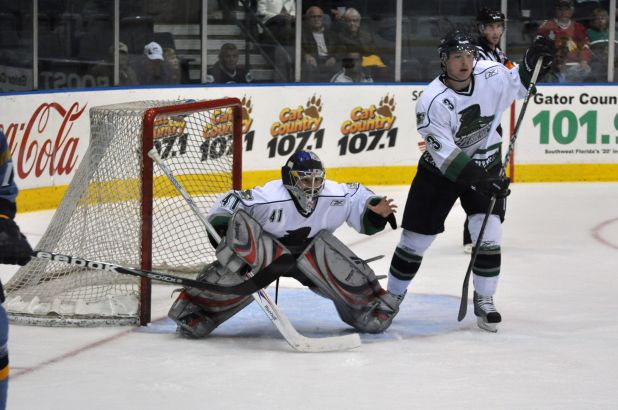 Campaigning for the NHL ASG 2011

The Jussi4ASG effort got a pretty nifty mention in Greg Wyshynski's presentation of various grassroots campaigns this week.Your Election Guide to 2011 NHL All-Star Game Write-In Campaigns - Puck Daddy : An impressive charge from Canes fans that includes an official website with a countdown clock, T-shirts and a Facebook page.

And we hear there's a new group devoted to getting Jeff Skinner in the regular All Star line up. At this point, we might agree that Skinner has a lock on being one of the twelve rookies selected by NHL's Hockey Operations (and that could change), but that would only get him in the skills competition Saturday night. To play in the Sunday game, he will need to be voted in or hope that Hockey Ops deems him as a top-42 player in the League. Here's the site helping along the write-in effort: voteSKINNER.com

Cory Lavalette had a couple of great posts on the talent in the Hurricanes pipeline over at his gig with Hockey's Future.

Carolina Hurricanes depth analysis, Fall 2010 - Hockey's Future After years of having very few NHL-capable players in its system, the Carolina Hurricanes had training camp battles at several positions involving multiple players. The result was five different prospects making the Hurricanes to start the season and several others poised to earn a chance over the course of the year.

If someone decided to write a Guide Book to Hockey Training to instruct others how to create a Steven Stamkos or a Jeff Skinner, you'd no doubt find this section: Take the ‘Gary Diet’ dare -  Yahoo! Sports Gary Roberts is the Chuck Norris of nutrition.

And you just knew this had to be coming, from the blog that made a name for itself by publishing the very funny "previously unseen" inbox of Gary Bettman last year, enjoy Down Goes Brown: A look inside Colin Campbell's inbox Campbell may not have learned from past mistakes, as explosive new emails between Campbell and his staff have emerged today.