Clicks and Clippings: The wheel goes round and round

Share All sharing options for: Clicks and Clippings: The wheel goes round and round

A lot going on, isn't there? Let's get right to it. A bunch of stories and reactions to the roster moves and announcements that came out of 1400 Edwards Mill Road today as Carolina Hurricanes GM Jim Rutherford shows us that he takes the state of the team at the 20-game mark very seriously.

Carter to Help with Faceoffs, Penalty Killing - Tracking the Storm Blog The Hurricanes continued a busy few weeks of transactions on Tuesday, acquiring forward Ryan Carter from the Anaheim Ducks

Patrick O`Sullivan, picked up off waivers by the Minnesota Wild

O'Sullivan Situation Ends Amicably - Tracking the Storm Blog It would appear that the situation with the Hurricanes and Patrick O’Sullivan has ended in the best possible way for both sides. We also have quick audio clips from Canes GM Jim Rutherford [here]  and O'Sullivan [here] discussing the move.

After the jump, more local links, a bagskate at the RBC Center today, and the usual assortment of updates from near and far.

Local news on the Hurricanes

Another weekly installment of the Hurricanes Report podcast from Tuesday afternoon, 11/23/2010. Recorded between the O'Sullivan and Carter announcements, the Canes media gurus, Kyle Hanlin and Paul Branecky, discuss the roster moves, review the last couple games, and preview what to look for over the next seven days. Lasts about 30 minutes. Two thumbs up.

Canes rookie Jeff Skinner on 620 the Buzz - WRALSportsFan.com Mike Maniscalco caught up with Jeff Skinner and found out how life in the League, roommates and tipping are all part of the normal routine.  They even ask Skinner about his great relationship with veteran Erik Cole. (about 5 minutes)

Jokinen Busts Slump in Big Way - Tracking the Storm Blog One wouldn’t know it from his 17 points in 20 games, but there was a point in this young season when Jussi Jokinen really struggled.

Also Kyle Hanlin confirmed a couple of Canes Corner guests set for early December, with Tuomo Ruutu taking some time with Mike Maniscalco on December 1st, and Chad LaRose in the spotlight on December 7th. You can always check the Canes Country Calendar for information on these fan opportunities, team practices and other Hurricanes-related events, beyond the games.

This is considered adversity?

If this is adversity in the eyes of the Washington Capitals fans and press, I now understand a lot more about the CapsNation. Several (and this is only a sampling) posts looking at how the Caps are dealing with three straight losses. The team arrived in Raleigh today for a demanding practice which, according to the Caps press on hand, began with the proverbial "bagskate" at the RBC Center. Gives us a hint of the battle we might see tomorrow. Or not.

Learning from Adversity - Japers' Rink What it does show, however, is the fairly obvious yet always key fact that no team goes 82-0.

The Capitals’ Inferiority Complex " Kings Of Leonsis The Capitals have an inferiority complex in that they play down to inferior competition on a regular basis. That kind of lackadaisical effort has been evident in two of the Capitals’ last three games, two 5-0 losses to the Atlanta Thrashers and New Jersey Devils.

Did Ovechkin, Semin cross line with postgame Koval-chuckles? - Puck Daddy And it's frankly unacceptable for Ovechkin to put himself in a situation where this becomes a story. Boudreau dropped him to the third line against Jersey. He hasn't scored a goal in four straight, and has two goals in nine games. It's not the best run for Ovechkin right now.

If you're looking for Caps twitter feeds, try Katie Carrera of the Washington Post and Corey Masisak of CSN Washington. Also check out a couple of their players, including veteran John Erskine, as well as Karl Alzner and rookie John Carlson.

Here's the Caps own video talking to players and coach Bruce Boudreau about the struggles on the road, after practice in Raleigh today.

And as if Ovechkin and Crosby weren't already over-hyped..

Have you heard about the HBO 24/7 All-Access series built on the rivalry between Ovechkin and Sidney Crosby culminating in the Winter Classic game in Pittsburgh? It premiers December 15th, and runs Wednesdays through the New Years' Day game. Here's the teaser, which I am embarrassed to admit was very cool, brought to you by Puck Daddy: Video: HBO's Penguins/Capitals Road to Winter Classic 24/7 teaser. Will you watch it? Would you buy the DVD?

The NHL announced the current leaders in the fan online balloting for the 2011 NHL All Star Game, voting on which began last Monday. The good news is that the Hurricanes are second only to the Stanley Cup Champion Chicago Blackhawks for number of players receiving significant votes. The Hurricanes have eight in total, five more than the three included in the standard ballot, who are of course, Eric Staal, Cam Ward, and Joni Pitkanen.

In order from most to least votes, the five Canes getting votes as write-ins are Jeff Skinner, Tim Gleason, Chad LaRose, Jussi Jokinen and Joe Corvo.

A nifty fact you'll like: while Chicago has nine players making the list, only three are write-ins. No other team has five write-in candidates, including the Montreal Canadiens, the Pittsburgh Penguins, and the New York Rangers who have four each, coming from their HUGE fan bases. Well done Caniacs!

Of course that may be diluting our power spread out over five write-ins, but let's worry about that closer to the end of fan voting, which closes January 3.

Here's the full story at NHL.com and list of all the top vote getters: Crosby, Keith top all vote-getters in NHL All-Star Fan Balloting. Here's the link to place your vote (again).

Cory Lavalette posted this earlier today, and with all the breaking news here today, be sure you don't miss it. Hurricanes Have High Hopes For Collegiate Defensemen - Canes Country Carolina's group of four collegiate blueliners has the Hurricanes excited about their defense's future.

Two of these NCAA Defensemen, Justin Faulk and Brian Dumoulin are in the running to make the Team USA roster for the World Junior Championship to be played in Buffalo, NY beginning December 26th. The announcement or the preliminary roster will be made December 7th per this post at the Sabres' site: Jim Johannson of USA Hockey to Speak at Luncheon- Buffalo Sabres. Here's more on the "pre-tournament" schedule from USA Hockey: World Juniors pre-tournament schedule set

Big hit of the night

Everytime there's a big hit, especially on open ice, we get to hear the ruling from Toronto whether said hit is considered "clean" according to the guidelines established by the League's newly minted head-shot rule. I personally don't mind this excess, because the more video we see of what's okay and what's not, the more likely we are to reduce the dangerous hits as defined by the new rule, which is designed to keep our hockey players brains intact. That's a good thing. Here's one such clean hit executed by the Rangers' Marc Staal at Madison Square Garden last night. No word when Stajan will be back in the lineup, but there is no evidence of concussion. I would imagine that he might be a little bruised.

And as a pendant piece to the video, here's a post with the player's point of view from the Bourne Blog: What it feels like to get absolutely drilled by a check - Puck Daddy

It's like somebody driving a semi-truck, going 80 with a fender made of corn flakes, plows you through a wormhole into another dimension where you live a whole other life as bizzaro you; then, suddenly, you're on some sheet of ice and what city am I in and who are all these people and why are they staring at me.

Yo! You pansies fighting the urge to panic over the Caps three-game losing streak! This story would be an example of real adversity within a hockey club. Watch and learn.

On the ice: yesterday the New York Islanders released this update on the injury to Mike Mottau's eye sustained Sunday night in Atlanta. Late this afternoon, we heard he was finally cleared to board a plane and come home. He was kept in the hospital in Atlanta 48 hours because the swelling was too severe for doctors there to evaluate the damage to his eye. The extent of the damage has not been announced. If you haven't seen the video of the incident, and are not easily upset by blood, here ya go.

Up in the booth: this story takes technical snafus' in sports broadcasting to a new low. Video: Islanders announcer caught being honest, apologizes on air - Puck Daddy Boy, the Islanders can't win. We mean off the ice. They ban a blogger from the press box for his criticism of the team, and end up with a play-by-play guy wishing it was baseball season in order to end his misery.

As you may recall the AHL affiliate of the New York Rangers, the team currently known as the Hartford Wolfpack is undergoing a re-branding effort mid-season. Behold as the AHL Connecticut Whale's jersey is revealed. 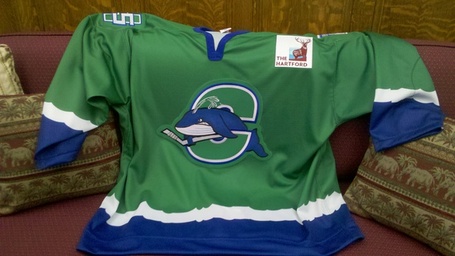 And amid all this chaos and uncertainty, you probably could use a laugh. Here ya go: Down Goes Brown: The Code: Hockey's unwritten rules revealed I've obtained a tattered copy of The Code, and transcribed it below. It's time that hockey fans knew the truth.