The Carolina Hurricanes fell behind once again last night, this time to the Washington Capitals before putting on a valiant come from behind effort in the third period, but ended up eventually falling to the division and conference leaders, 3-2.

The Caps took the lead a little past midway through the opening period after Justin Peters allowed a rebound that he wished he had back.  Alex Ovechkin put a shot on goal which Peters initially stopped, but the puck squirted loose and Nicklas Backstrom was right there to tip it into the net for the visitors.

Backstrom would score again just a minute into the second as he put on a dazzling move while using Tim Gleason as a screen, and he easily slipped the puck past Peters.

The Canes really cranked up the intensity in the third period and started to put pressure on Semyon Varlamov.  Joni Pitkanen found Sergei Samsonov in front of the net for the first goal and Eric Staal put back a Jeff Skinner attempt in close to tie things up.  But the Hurricanes took two consecutive penalties to kill their momentum and the Caps scored early in their second powerplay of the period as Peters tried to clear a puck to the front instead of to the side.  Brooks Laich ended up scoring the game winner for the bad guys.

The Canes pulled the goalie in the last minute in hope of some late game magic, but it was not to happen against the Caps.  Both teams deserve credit for diving in front of some loose pucks as they blocked shots in the waning seconds of the game.  The home team was trying to protect an empty net, the visitors trying to preserve the victory.

Carolina will practice at noon at the Rec Zone Thanksgiving Day before flying to Boston for their noon start time match against the Bruins on Friday.

Here is the Bodie/Bradley fight

And finally, just in time for HBO's Winter Classic Special, the Caps are back on top.  Not that the NHL is too happy about it. 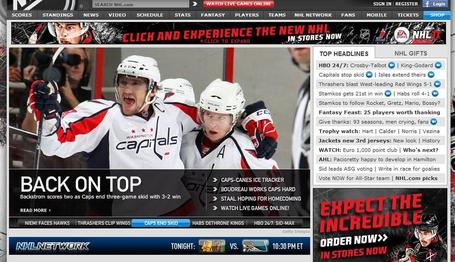