The Road To Raleigh: Three out of Four- Not too shabby

Share All sharing options for: The Road To Raleigh: Three out of Four- Not too shabby 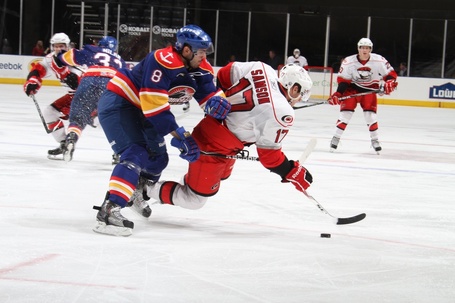 The Checkers entered the week with a tough home and home series with Norfolk on the slate. After that, the Checkers would head to Worcester for their first look at the Sharks, and then walked in to a Sunday affair with the tough Hershey Bears.

Charlotte ended up where they wanted however. Taking six of the eight available points for the week is a nice looking accomplishment for the junior Canes.

The Checkers were still riding high going into this week. They faced a difficult stretch of games, with 3 out of the 4 on the road. Ironically, the Checkers three wins this week all came on the road. A night to forget in Time Warner Cable Arena on Monday was followed up with three strong performances.

HOT- Rodney found his offensive stroke this week for sure. His five points in the four games this week led all Charlotte blueliners. Rodney's nice looking week included a two goal performance against Hershey on Sunday.

HOT- Dalpe stayed red hot. One of his three goals included a late dagger to the heart of Norfolk late in the game. His two goals that night came in the final minute within an 11 second span.

HOT- Talk about being a dish master. Samson dished the puck beautifully this week, picking up a team high five assists.

HOT- Nice looking week for Nash to be sure. It was good to see him find the score sheet again after being held off of it for some time.

Despite the small implosion on Monday night against Norfolk, Checkers goaltenders rallied to come away with a very impressive looking road trip. Pogge saw back to back starts on the road against Norfolk and Worcester. Against the Admirals he stopped 28 of 31 shots, and he followed that up with a 42 out of 44 save performance against the Sharks. Murphy closed things off by shutting down the high octane Hershey Bears. Stopping 38 of 40 Bear's shots put the lid on a nice looking week of Charlotte goaltending.

As previously mentioned, Dalpe showed great maturity and resolve late in the game against Norfolk. His five points looked nice this week- he continues to be a very, very bright spot on this team. Jerome Samson dished the puck extremely well. Samson's five assists were complemented with a goal to boot. Riley Nash showed point production this week, a good thing to see. Zach Boychuk notched three goals and two assists. Drayson Bowman added a goal and three assists. The Checkers have these young guns working very well in harmony.

Newly acquired Brett Sutter was the big story this week for the Checkers team. In his debut on Monday night, Sutter picked up a game misconduct penalty for boarding, and also got into a fight. Sutter accumulated 20 penalty minutes this week- by far tops on the team. Gritty may be an understatement. The Checkers saw Stefan Chaput and Matt Kennedy leave in the Bodie/Carter trade. Both Chaput and Kennedy however had minimal production when they weren't healthy scratches. Jon Matsumoto was obviously back in the Checkers lineup- he grabbed a goal in his first game back. Kyle Lawson and Ethan Graham were added from ECHL Florida to compensate for injuries along the blueline.

The Checkers have a quiet week this week. A VERY quiet week. Their only game is a Sunday affair on December 5th against the Syracuse Crunch. This 3 P.M game is the only one for the Checkers this week. The Checkers will meet the Crunch again the next day at 7 o clock- another game in Time Warner Cable Arena.

The Canes country readers showed off their intelligence last week. The only retired number for the old ECHL Checkers was number 4- worn by defenseman Kurt Seher. Dusty Jamieson was a fan favorite too, but didn't have his number retired. Dusty's picture however does hang proudly in the media catering room. Noren and Cairns were also great players to pass through Charlotte, but alas, did not have their number immortalized.