Share All sharing options for: Your Illustrated Guide to the NHL All-Star Game Vote Totals (Week 2)

As much as I love how the NHL is attentively updating hockey fans weekly on the player vote totals for the 2011 All-Star Game, (which of course will be hosted here in Raleigh, North Carolina, January 28 to 30), I was less than thrilled that they expected us to scroll through those ridiculously long spreadsheets of 150 names and six-digit numbers. Their presentation of the data leaves a lot to be desired, and is almost impossible to interpret meaningfully. < lightbulb >

How the heck is any serious All-Star hockey fan looking for popularity trends, trying to validate conspiracy theories, or seeking encouragement in these progress reports, possibly going to strategize the next move of the campaign unless someone steps in and paints them a picture. Hockeymom is here to help. For those diehard fans out there with vote.nhl.com permanently open on their desktop and 81812 as an open text dialog on their cell phone, those stalwart puckheads who are emotionally invested, even obsessed, in the ASG balloting process, I thought I'd take a page from any old media election center and get the recent results re-presented as friendly bar graphs. It's a bit more modest than CNN might do for you, but I hope you like it just the same. 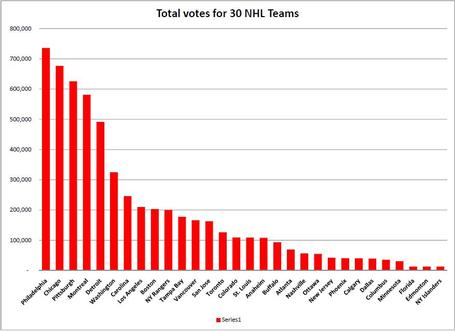 A graph showing the total votes cast for players of each of the 30 NHL teams as of Nov 30.
(Click on image to see larger version.)
HM ANALYSIS: The fans of the four Stanley Cup Finalists teams from the last two years, Philadelphia, Chicago, Pittsburgh, and Detroit are predictably carrying the vote, plus Montreal, where the write-in vote counts will blow your mind (I'll get to that below). After that, we have fans of players in Washington, Carolina, Los Angeles, Boston, and the NY Rangers, rounding out the top 10.
While it would be simple to try to correlate current points in the conference standings to vote totals, the ASG host team Carolina Hurricanes stands out for getting Top-10 votes while the team struggles to stay at .500 and above the playoff cut. At the other end of the voting chart, the Dallas Stars and Columbus Blue Jackets may be at or near the top of their divisions, but the fans (who are scarce enough in their respective markets to begin with) apparently haven't embraced this concept yet as the two clubs are conspicuously out-of-place and lingering in the bottom six among vote getters.
Also hard to miss that the State of Hockey may be rooting harder for their top-ranked NCAA hockey team in Duluth than finding a moment to recognize Mikko Koivu or Niklas Backstrom. Or perhaps they think the whole All-star thing is bogus. Just a thought.
After the jump, a look at the efforts of the Top-10 markets in more detail plus graphs of individual player balloting focusing on the super-stars, the rookies, and the write-ins. 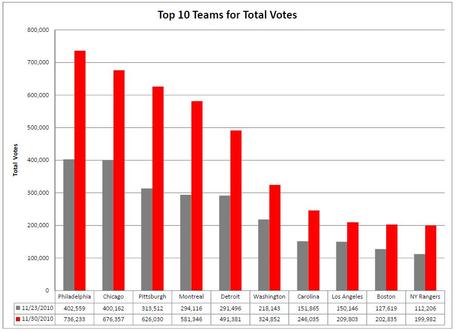 A graph showing the total votes cast for the top 10 vote-getting teams, broken down by week.

HM ANALYSIS: What I am going for here is to demonstrate the momentum of the top vote-getting teams. While Philadelphia and Chicago were in a dead heat after week 1, Philadelphia fans vote counts increased by 83% in the second week while Chicago is losing some steam, with only a 69% increase. In Pittsburgh and Montreal the vote counts from weeks 1 to 2 had 0% drop-off, thus doubling week-over-week. Carolina fans only added 63% of the week 1 total in week 2 (ahem), and up in our Nation's Capital, the second week vote totals were less than half of what came in during the opening week of balloting. A little malaise from those Rocking the Red it seems. Over-confident, perhaps? Or part of greater campaign strategy?

Next up, a picture of the individual totals for players who transcend their markets, the NHL's "Superstars" among All-Stars. 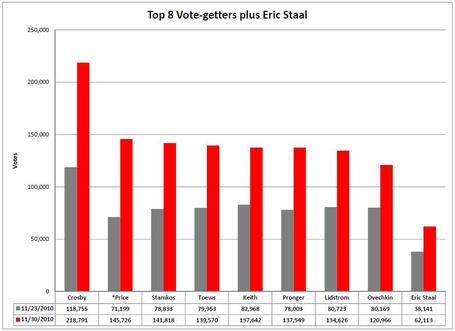 The total votes cast for the top 8 vote-getters, plus Eric Staal, showing totals at end of each week..

HM ANALYSIS: No one was surprised when Sidney Crosby started off with a huge lead after one week and then watched his vote count nearly double with only slight drop-off in week 2. (Cue the NHL conspiracy theorists.) More fascinating, this graph shows us the electoral power of the Montreal fanbase, as Habs netminder Carey Price, a write-in candidate no less, shot up from eighth place to second by more than doubling his votes from one week to the next. Steven Stamkos, Jonathan Toews and Duncan Keith may have been capturing trophies last June, but Price has captured the hearts of the hockey fans in Montreal.

Now on to two sets of  players who are unlikely to make the top six that the fans will choose, but are making a case for Hockey Operations to include them in the 36 players that they will invite to join the fun in January. Especially that kid, Bob, the goalie. 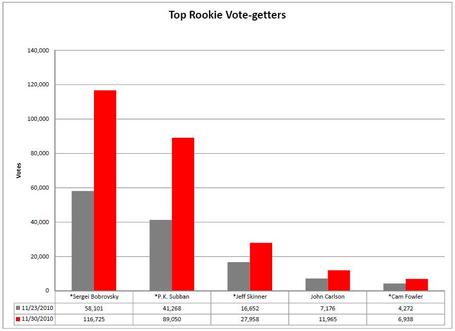 Five rookies are among the top 150, with Philadelphia's Bobrovsky and Montreal's Subban making big noise.

HM's ANALYSIS:  While Sergei Bobrovsky was an unknown two months ago, here he is inspiring a city, who might be understandably cynical given their storied hockey franchise, to do more than their part and get out the ASG vote. Remember at the top of this post where Philadelphia had surged ahead of Chicago in week 2. You can't help but believe the fan's delight in Bobrovsky is the root cause. And Montreal fans, bless their puck-loving hearts, are uniting behind young defenseman P.K. Subban. After those two, the counts drop off drastically, and the three remaining rookies on the ballot are Carolina's talented sweetheart, Jeff Skinner, the Capitals' John Carlson (who is not a write-in by the way) and Cam Fowler, Anaheim's first round pick this year.

Finally, graphically demonstrating perhaps the biggest story so far of the ASG's balloting, there are a full one-third of the top 150+ vote getters who are in fact "write-ins". 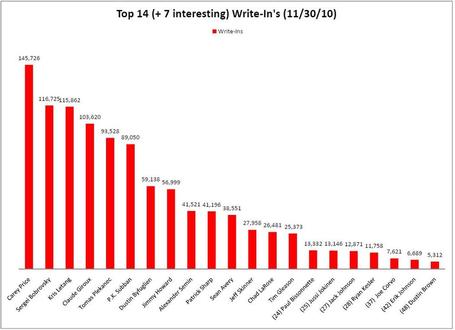 Current vote totals for the top 14 players, plus 7 others with counts I found interesting.

HM's ANALYSIS: I've included the top fourteen, to be sure I got the Carolina write-ins in order (Disclosure: I have friends running these Carolina campaigns), and then added several others with their rankings among write-ins only, indicated in parentheses. For the Hurricanes, Jeff Skinner, Chad LaRose and Tim Gleason come in 12th, 13th, and 14th, and are joined by Jussi Jokinen and Joe Corvo above.

I'll admit to see those Team USA Olympic Silver Medalists (Jack Johnson, Ryan Kesler, Erik Johnson, and Dustin Brown) getting so little support from their home fans made me a little sad. I feel badly that they'll be so terribly disappointed the whole time they're lounging on some exclusive beach in Mexico come January. Unless the NHL decides to rectify that.

The "write-in" subset is at its heart a view into the fans making a statement, mostly in earnest, for the most talented who they feel were overlooked when the ballots were created weeks ago. These fans want to go the extra mile to show their appreciation. Who knew Kris Letang was the second most loved player in Pittsburgh?

Other choices are perhaps getting the nod from hockey fans because of their perceived entertainment value, or in some cases as a protest to the elitism, correctness, and political bias that seems inevitable when you have a large corporate-sponsored entity like the NHL making the calls. At least I think that's what's behind Sean Avery's 38,551 votes.

To my fellow Carolina fans, fear not. No we aren't putting up the huge six-digit numbers others have shown. But don't overlook that Carolina is one of only three clubs with five write-in candidates making noise. The other two cities are known for their over-the-top fanbases, and benefit from the support from NHL's marketing HQ when they showcase Pittsburgh and Montreal across North America. Like I said, the Carolina fans may be diffusing our vote to our Hurricanes' own detriment, and no one player will top the leader boards come January 3rd when voting closes, but really, it makes no difference when it comes to who gets the call from Hockey Ops, does it?

I'll take it as a strong endorsement by the Carolina fans for this larger group of players we admire not just for the effort on the ice and the memories we've shared, but for how much we've come to like them as teammates and as part of our community. Like they say in these parts, "It's Staal Good".