The Road To Raleigh: A Road Trip To Spread Holiday Cheer

Share All sharing options for: The Road To Raleigh: A Road Trip To Spread Holiday Cheer 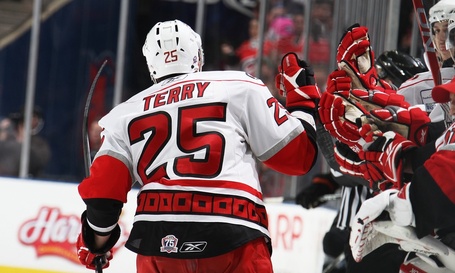 The Checkers embarked on a roadtrip, knocking out the first three games of the five game swing this week. Challenged by the likes of Providence, Binghamton, and Hershey, the Checkers stayed hot and never backed down. Charlotte took four of the six available points this week to stay red hot.

Despite being short of one of their top scorers in Zach Boychuk, Charlotte's scoring pace was enough to win two of three games against opponents on the road. More after the jump.

Charlotte's three game set this week began with a visit to Providence to face the Bruins. The Checkers handled business against the minor league affiliate of the NHL's Boston Bruins and then had a date the following day with the Binghamton Senators. Jon Matsumoto led the offensive charge in a 4-2 win over the Senators. Another Sunday affair loomed with the Hershey Bears, a game the Checkers would drop 6-3. Justin Pogge let his emotions get the best of him as he took an unsportsmanlike conduct penalty directly followed by a game misconduct for abuse of the officials, which opened the gate for Mike Murphy to finish out the game. Murphy won his start in Binghamton and Pogge won his against Providence. The two obviously split time on Sunday.

Wilkes Barre continues to roll on. Norfolk has been hot of late, losing only once in regulation in their last ten games. The Checkers follow closely, losing twice in regulation in their last ten affairs. Hershey is hanging around at four followed by Binghamton, Syracuse, Albany, and lowly Adirondack. Big shout out and congratulations to Oklahoma City forward Alexandre Giroux for claiming his 600th AHL point. He becomes the 44th player in league history to tally 600 points, congratulations Alexandre. The familiar Keith Aucoin tallied his 200th career AHL goal on Sunday against the Checkers. Another great accomplishment by a great American Hockey League player.

*Jon Matsumoto notched 2 goals and 1 assist in the 3 games this week.

*Jared Staal was finally rewarded with his first career goal on Saturday against the Senators. On the same night that his bigger brother Eric was single handedly sinking the Ducks.

* Riley Nash contributed 1 goal and 3 assists this week. His game has been strong including a 2 point night in Providence.

*Justin Pogge picked up a rare goaltender assist against Providence on Brett Sutter's second goal of the season.

* Oskar Osala had a goal and two assists on the week. A two goal night against Providence was followed up by an assist against his former team, the Bears.

*Hats off to Brad Herauf for not abandoning his role as a tough guy. He dropped gloves on Friday night in the second period.

* Zac Dalpe added a goal and an assist on the week.

* Jerome Samson scored 2 goals and 3 assists. He was the Checkers most potent and consistent forward this week.

It was good to see Bryan Rodney get the NHL call for our beloved Canes. Although his stint was short, it shows the ease the Hurricane have of calling players up when the injury bug strikes like it did on Jay Harrison. Rodney has proven to be a good powerplay quarterback at the AHL level. Perhaps after seeing a glimpse of the next level, he will iron out some things in his game.

Should another defenseman go down, Brett Carson is an attractive option. He like Rodney has spent time with Carolina before. He was a + 1 on the week. Casey Borer was a + 2 as well. It was reported this week that Bobby Sanguinetti's season is officially over. A torn labrum will sideline the New Jersey native defenseman for 3-4 months. Sanguinetti had proved to be a quick, puck moving d-man who was coming into a good all around defensive game. Kyle Lawson has been seeing more ice time with Bobby's absence.

Drayson Bowman has missed two games with a lower body injury. Nicolas Blanchard has missed a handful of games with an upper body concern- both players are missed by Charlotte. Pistilli has played well filling in for Bowman. He dished out 3 assists on the week.

Big shout out to three Checkers forwards for making the top 25 in Scott Cullen's AHL player rankings on TSN.ca. Samson, MicFlikier, and Boychuk made the cut. Finishing 10th, 19th, and 23rd respectively. Take a look at the rankings and you'll see a familiar face- Martin Gerber now of the OKC Barons at 8th. Goaltender Mark Dekanich from Milwaukee leads the list of players.

With Tlusty going down after that vicious hit from Ben Eager, we saw what the depth of Charlotte can do for the Canes. Provide great forwards on pretty short notice. Boychuk came up, and we could and probably will see more fo the same from Dalpe, Samson, Bowman, Terry, and others as the season rolls along and injuries occur.

The Checkers enjoy the holidays off. No games are scheduled this week. The team begins play again on the road for a two game set against rival Norfolk. After two games with the Admirals, the Checkers host the Binghamton Senators for a two game set in Time Warner Cable Arena after the turn of the new year. Unless anything noteworthy happens this week, The Road To Raleigh may enjoy a holiday break with the Checkers playing no games, but look for action to resume once the Checkers resume play the week after Christmas.

First off, a big shout-out to CC reader, Pete. Pete pointed out to Cory and myself that contrary to misconception, the Checkers never won the Kelly Cup. My trivia question was indeed an accidental trick question two weeks ago. My research has confirmed that the ECHL Checkers won the league championship in 1995-1996 but the trophy was called the Jack Riley Cup. Thanks Pete! Sharp eye, reader feedback is appreciated for such things.

Last week's trivia featured an even race between Darryl Noren and Scott Bailey. As it turns out, Noren led the ECHL Checkers in all time goals, assists, and points. He also coached and played roller hockey. What a career! How about something more NHL relevant this week, eh readers?