Share All sharing options for: Clicks and Clippings: Rash Decisions

Apparently, the story of the unspecified infection/rash on Cam Ward's forehead has legs. The Carolina Hurricanes number one goalie, who has played "lights out" the last several games stealing points night in and night out, was given back-up duty in Tampa Monday night, as Head Coach Paul Maurice decided to give rookie Justin Peters the start. The Canes, who had been enjoying a four-game win streak, lost 5-1 to the Lightning. "The rash" became the headline today, somewhat of a distraction to what, in my mind, is the greater concern of the Canes getting back on track of consistency after the ineffective performance by the full roster versus the highly-charged Bolts.

From this morning's N&O print edition: Canes hope Ward returns - NewsObserver.com The Carolina Hurricanes are hoping goaltender Cam Ward, whose string of starts ended Monday because of an infection, will be able to play Thursday against the Montreal Canadiens.

Ward to Start Thursday - Paul Branecky, Tracking the Storm Blog Ward, who reported dealing with swelling, burning, itchiness and limited vision when he first noticed the infection Monday, said part of his test Wednesday was to see how he felt with sweat running down his forehead.

Ward to be back in net for Canadien - Canes Now "I don't want to build this thing out of proportion," he said, smiling. "It's just a little thing on my forehead. We don't need to be talking about it around the world."

Checking in around the world, up at the Montreal Gazette's blog Habs Inside/Out, they posted nearly 5 minutes of audio with Ward, sounding like he really doesn't want to talk about "the rash", but is happy to talk about the team developing its identity this season, and recalling fondly his 2006 post-season debut vs Canadiens. [For those who keep track of such things, that would be Rihanna you hear in the background.]

Capturing the mood of the fans in Quebec, this is also from the Montreal Gazette's beat writer, Pat Hickey, who was disappointed with the Habs less-than-stellar performance vs the Stars in Dallas last night, where they lost 5-2, even with the heroic Carey Price in goal.

After the jump, more links from local media, checking in with the Checkers and World Juniors, and the usual scan of the hockey blogosphere.

Back in Raleigh, I found this to be a more interesting question as Maurice (Audio, 5:45 minutes) was asked about his intentions for 21-year old Checkers' call-up  Zach Boychuk. Maurice indicated that Boychuk is playing better overall than he did in September at training camp, adding,

"He will have to stay physically involved in the game at a pace and a level that will keep getting him ice time till he can buy enough minutes to get some time to score. Am I happy with him? Sure. But not I'm not squeezing any guys out of the top 9 to make room for him."

The Gazette has the uncut version of Maurice's comments as well (10 minutes).

Carolina Hurricanes Report 12/21/2010 - The duo of Kyle Hanlin and Paul Branecky talk about the 4-out-of-5 wins and answer questions from the Twitterverse. Good stuff - about 35 minutes.

Starting at 4:30 mark of this RLD Hockey Talk with Ryan Porth, I recommend you listen to Carolina's own John Forslund about his thoughts on the Canes this season, why Jeff Skinner is different, how Forslund got where he is today, Raleigh as a great site to host the NHL 2011 ASG, and the future of NHL on your TV. (Forslund's segment lasts about 25 minutes)

A good look at the Canes' 2008 first round draft pick at HurricanesBeat.com:  Waiting on the Wing: Boychuk awaits permanent role in Carolina

Last on here, I loved this from the N&O, Hurricanes' Ruutu is healthy and hitting - NewsObserver.com "[ Tuomo ] Ruutu's playing a meaner game," coach Paul Maurice said. "He's always hit hard, but it looks like he's trying to separate body parts at times."

A couple new blogs have started up and are following the tournament over the next couple weeks:

Another way-less serious blog focusing on Team USA's play at Buffalo written by the always annoying Ryan Lambert (from Puck Daddy) and the blogger formerly known as Chemmy (Pension Plan Puppets), going by the name The Sleeping Giant. The United States World Junior hockey team will actually kill you. Meanwhile, the two American heroes who write this blog  will constantly remind you of that fact, and how terrible your home country is. I'm thinking Lambert is kinda like Chad LaRose: he's a lot funnier when he's on your side.

Mike Sundheim got some help from Ruutu and Joni Pitkanen this morning to find this story on the Team Finland WJC roster. Little lions Cup team player to me |  YLE Sports which indicates that the Canes' 2009 draft picks Rasmus Rissanen and Tommi Kivisto are among the final 8 defensemen in the running to play for the "Little Lions" in Buffalo. The final number will be only seven, so Team Suomi will need to cut one more.

For your further information: the Team USA Hockey pages for Justin Faulk, and  Brian Dumoulin

Julie Robenhymer: - Team USA: Who Got Cut & Why Since neither of the Hurricane's prospects, Brian Dumoulin or Justin Faulk were sent packing, read this to find out what they offered that these less fortunate guys didn't.

The Fourth Period Rookie Watch :: No. 2 Skinner hanging out at #2, still. Logan Couture tops their list this week.

And over at The Hockey News' Top 10: Calder Trophy candidates there is a new #1, from the Colorado Avalanche, describing him thusly:

Kevin Shattenkirk Another surprise because it’s surprising he’s even in the NHL;... his 5-14-19 totals are tied for fifth among rookies and he’s only played 23 games. And don’t forget he’s a defenseman. Pretty heady stuff.

Checkers and another prospect in the news

Our own Cory Lavalette had a new post up this week at Hockey's Future and it's chock full of information on the full line-up in Charlotte: Carolina Hurricanes minor-league affiliate heavy on NHL ready talent Jeff Daniels has guided Charlotte to a 17-10-1-3 record, using a balanced scoring attack led by several prospects to lead the team into the thick of the AHL's Eastern Conference playoff hunt.

A blogger for the Providence Bruins caught up with Jared Staal and Oskar Osala in her piece on the P-Bruins' 3-in-3 weekend:  Slumpbusters! Schaefer reigns supreme, P-Bruins win two of three

And here's the video highlights of the Checkers' heart-on-his-sleeve Justin Pogge responding to what he felt was a blown goalie interference call in Hershey last Sunday: Justin Pogge Loses It - Hershey Bears vs Charlotte Checkers. He was assessed 2-minute minor plus  two misconducts by the officials, and was ejected from the game. Thoughts?

In the Ontario Hockey League, prospect Justin Shugg may not have made the short list for Team Canada, but he's not losing any steam in Mississauga where he simply powered his team to a win over the weekend. Sunday's 3 stars- Buzzing The Net - Yahoo! Sports No. 3 star: Justin Shugg, Mississauga St. Michael's Majors (OHL)

Cory takes a look at who might make the top-six in the League and take a spot between the pipes come January 30, 2011 at the RBC Center. Choosing All-Star Goalies Will Be A Tough Task - From The Rink When the NHL All-Star Game rolls into Raleigh next month, Hurricanes goalie Cam Ward could be among those chosen to man the nets for the hometown crowd. Trouble is, so could nine or 10 other netminders, too.

And a progress report on the ASG voting is here with all the current vote counts. Among the Canes, Eric Staal is still at #1, but Chad LaRose continues to surge and is in 2nd place among the Carolina contenders, ahead of Cam Ward. LaRose's tallies have been helped out by a tremendous turn out of support at the texting booth. Overall, here's how the top 10 teams compare as of Tuesday. That 12-game win streak of the Penguins really earned them some love. [Click on image for full size.] 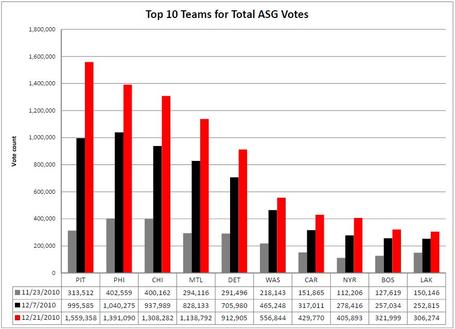 If you only read one story in this post, start here with this close look at the life and death of Brendan Burke and his father's response, from the men's magazine GQ: Mary Rogan Examines NHL Legend Brian Burke and His Advocacy for Gay Athletes

Brian Burke isn't just a legend of the NHL. He's a fists-up, knock-your-teeth-out gladiator. But when his hockey-loving son came out of the closet and died soon after, he was thrust into a strange new role: advocate for gays in a macho sports culture. He's no cheerleader—he looks like he hates every minute of it—but locker-room homophobia may have finally met its match.

Here's a shocker (not): Sore knee sidelines DiPietro. However this was a genuine and disappointing surprise from the  NY Islanders today: Mottau to miss rest of season - NHL.com

A hot topic as NHL's ratings continue their steady growth, helped certainly by the newest tradition of the "Winter Classic" and the buzz created by the HBO 24/7 series (BTW: Episode 2 airs tonight at 10pm), is the future TV broadcasting rights after this season: Media predictions for 2011 heavy on the Comcast questions The NHL will split its media rights package between ESPN and Comcast.

I can add nothing to this: Red Light " It’s Leafs vs. fans in waffle crackdown " The war against waffle throwers at Maple Leafs games in Toronto has escalated

The Washington Capitals Andrew Gordon, 25, a career AHL-er, scored his first NHL goal (vs no less than Marty Brodeur) last night in his 8th game in the last 3 seasons with the Caps. He was so very happy with the pass he got from Marcus Johansson to set up the play that "when the two returned to the bench, Gordon planted a smooch on Johansson".  VIDEO: Andrew Gordon Scores First Career NHL Goal, Possibly First Male Kiss -  SB Nation DC . Personally I love the sponteneity, but suspect some would be more comfortable to know there was mistletoe involved, somehow.

Finally, thinking that the holidays are often about connecting with distant family, I thought it appropriate to share that long time Hurricane Niclas Wallin seems to have landed on his feet in San Jose, where he was traded at last year's deadline for a 2nd round pick.

First this: Which blueliner does Todd McLellan trust most to start in the defensive zone? - Fear The Fin A look at defensive zone starts for San Jose's blueliners... with the big Swedish defenseman earning both the coaches and fans trust as the season goes along.

Announcing FTF Night At The Tank Prizes - Fear The Fin A New Year's raffle by our SBN cousins in San Jose includes a prize entitled "The Swedish Premiere Pack"  which makes it clear Nikki has found his way into the hearts of the Shark Tank's faithful. (You'll probably know which video they have found without clicking on the "interview" link, am I right?)

Included:  A framed photo signed by Douglas Murray, $25 gift card to Red Robin (Home of Insanely Delicious Hamburgers) signed by Niclas "Hamburgers" Wallin, and a commemorative puck from the NHL Premiere Series in Stockholm signed by both Swedes.